Well,that’s day 2 under my belt.I always like to get into these places early and pick a corner spot with some shrubbery and no one at least on one side of me.That way no one blocks my satellite dish. 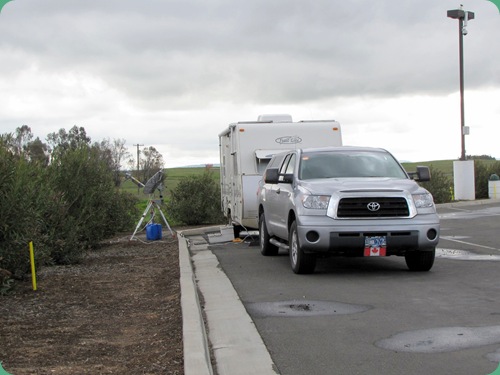 There is an RV Park associated with this Casino,but I,along with several other cheapskates,prefer the big truck parking lanes and the wonderful price…0..:) 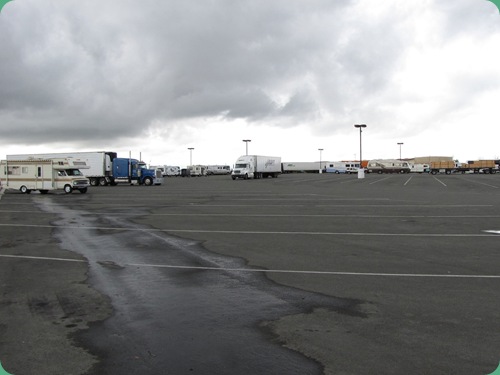 As you can see its a pretty big area.The RV park is located behind those trucks in the distance.

The day yesterday was a dreary,cool day starting out with miles and miles of the same kind of farming country scenery like this. It rained most of the day and sometimes it was heavy,although I did see some bright sunny periods.The temperature hovered in the mid 50’s to low 60’s.

The blossoms and wild flowers were in abundance most of the way. 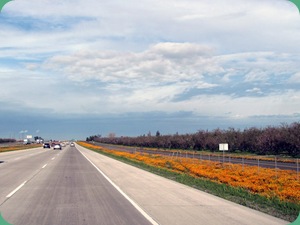 In fact those wild flowers stretched for miles and miles,mostly orange and yellow in color but a few purples are in the mix.I remember this last year and still wondered what they all were.And no not California Poppies,too small…..I think?

A lunch break in cold Lodi at the Taco Bell,a yearly stop.Running from truck to the Bell in the cold rain made me realize I’m getting back to winter so I better get used to it.The party is over.

Its here in Lodi where I cross over to I-5 for the rest of my northward journey,as highway 12 on the crossover is also the start of an alternate route to the coast just north of Frisco if it is needed due to foul weather in the high country.

Next is one of my favorite towns,only because I grew up through my teen years, listening to radio station KFBK,and knew Sacramento like it was a second home.It was the only station I could get most of the time on my radio, high in the mountain valley in BC, where we lived,so I knew much about the city.I faithfully followed their baseball team,the Solons,and liked listening to the late night call-in music show called,”Stan’s Private Line”…..Oh memories!

These photo’s are for you Gypsy,since I know you are headed here.Too bad it was such a  dreary,rainy day. 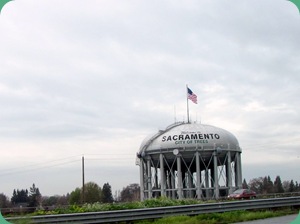 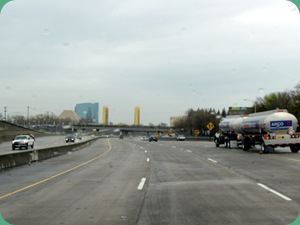 Some day I’ll get off the freeway and have a better look at this city of over 400,000.I love some of the downtown architecture.Too bad all I could do in the heavy traffic was point the camera and hope for the best. 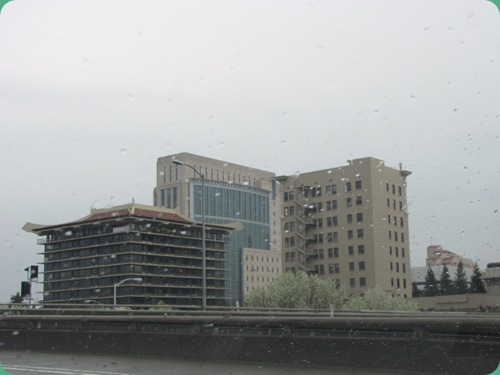 Some of the more unique buildings escaped this shot….Picked up the raindrops on the windshield though….Had to co-ordinate the shots between swipes of the wipers and watch where I was driving at the same time.Not an easy task, and one day all of this is going to get me into trouble. 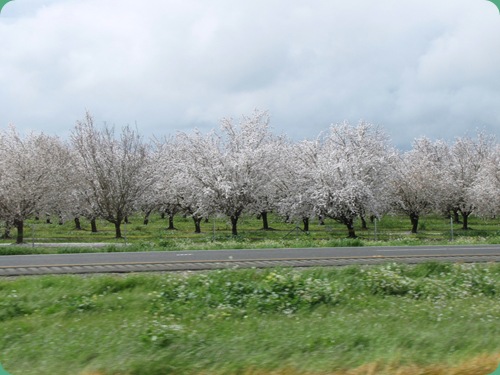 I arrived at the Casino around 2PM,early enough to select a good spot and set up before the next big downpour arrived.And that I did,but a big one got me later anyway when I wasn’t looking,and it was like someone poured a bucket of water over me in a matter of seconds as I was out filling the generator and had my back to its approach.

Oh well!…This isn’t the desert Dorothy,and it isn't Kansas either. 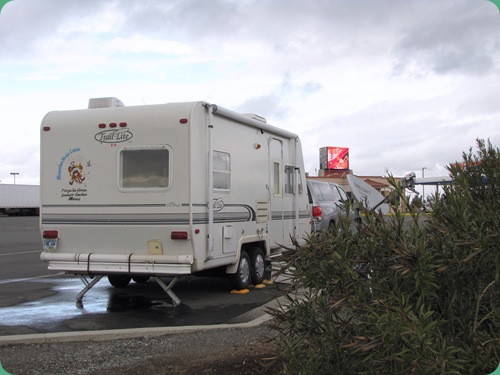 Today will hopefully take me over the Siskiyou mountains(4000ft)and down into southern Oregon,and with the rain that's pouring down right now at near 4am,I hope that snow in the high country is not in the forecast…..See you down the road…..Or is that up the road?…Oh well,one or the other.

Posted by Wandering Willy at 4:09 AM