(Pronounced de Shay)  And a free campground to boot. 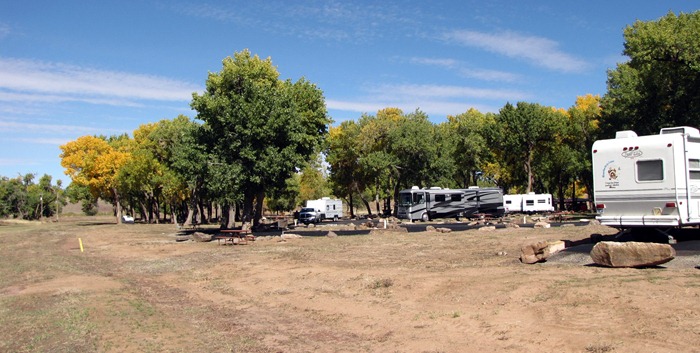 On top of that its in a beautiful cottonwood setting,which is why they probably call it “Cottonwood Campground”

……A choice of sunny or shaded sites all on beautiful new blacktop.And only a few people each night…Lots of choices.I think the reason for everything being free is the fact that its a National Monument on Navajo land. 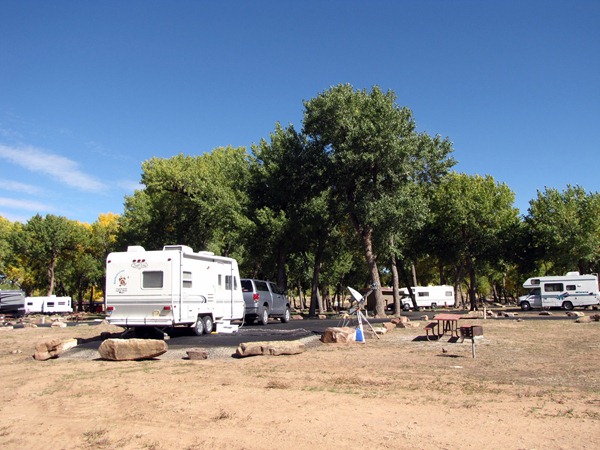 I arrived Monday,just after lunch, as a vicious,cold rain storm was approaching.Clearing in the evening and plunging to an overnight low of 27f (-3c)The whole way from Monument Valley,I was dodging bad storms and watching for tornado’s sneaking up behind me as some pretty mean looking clouds were around.

On that trip I passed through the town of Mexican Hat Utah and saw its namesake on the far hill,Mexican Hat Rock. 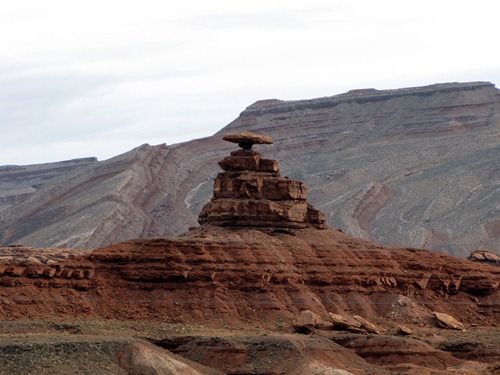 Tuesday morning dawned sunny and cold,struggling to reach a high of 54 for the day,but that's ok for driving and sightseeing….I decided to take the north rim highway this day….The visitor centre is closed for renovations,so I had to do a little on-line research… To set the scene,the canyon sort of starts here at the campsite,but is not deep in the local area.The surrounding landscape starts rising immediately going from 5500ft here at the campsite to over 7000ft when you climb up to the back end of the canyon,some 26 miles back.So when you get up there and look over the edge…….Its a looooong way down. 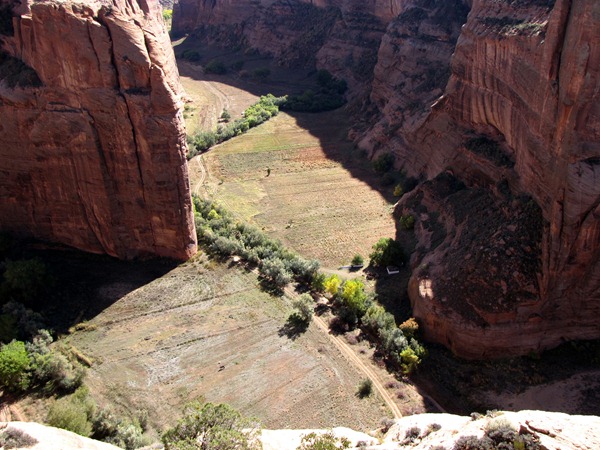 See that little black dot in the field in the lower centre of the picture? 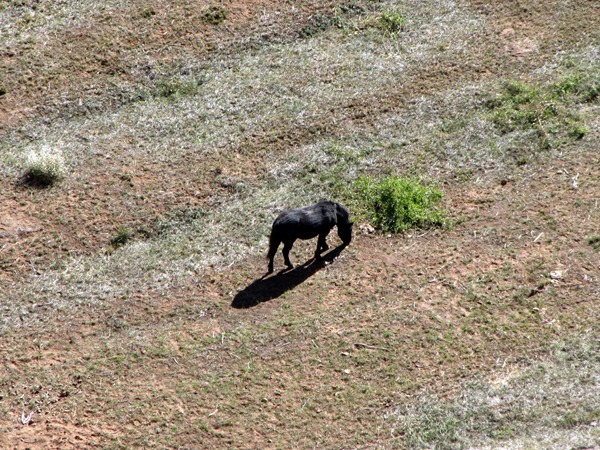 You can walk right up to the edge and look straight down a 1000ft and fall that far if you wish.But like the guy I was talking too said……After the first 20 ft.,It doesn't really matter how far down you fall.With my vertigo,I wasn’t too brave…… but It was interesting to look straight down and see ravens flying 500ft below me.

As you can see its a very lush ranching valley that stays that way all year round,even when the snow flies at the top.So they say. 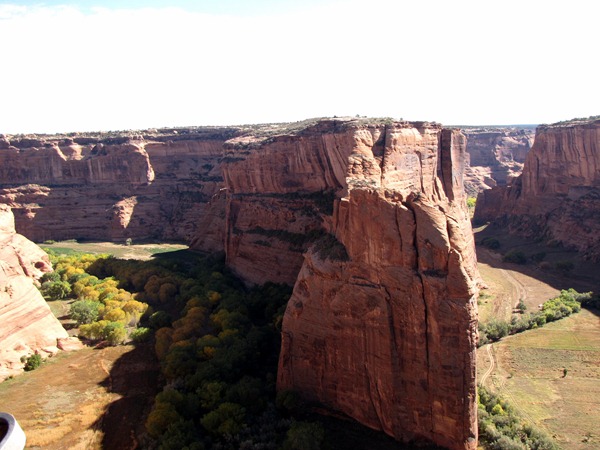 This canyon valley floor has seen continuous  habitation for over 2000 years,from mud huts on the valley floor to cave dwelling,and now ranch homes.Below are some shots of Yucca cave and Mummy cave,with the ruins.The Mummy Cave was where they discovered well preserved human remains. 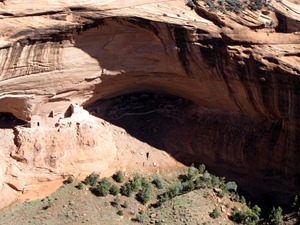 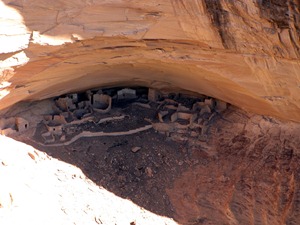 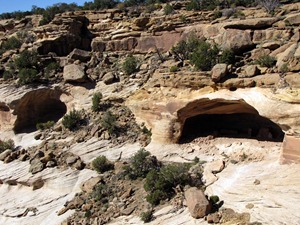 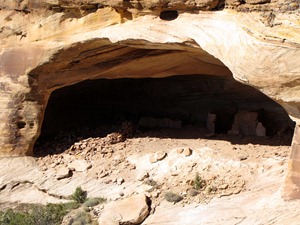 This was an interesting little story if you can read it. 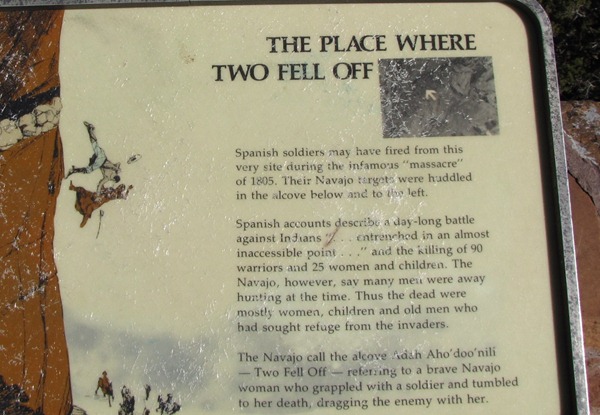 And here’s the spot.That cave in the centre. 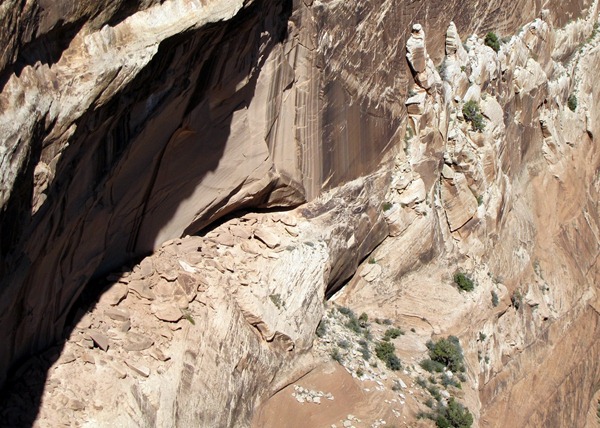 For those interested,I found all over this high altitude desert country,that the trees seem so lush and healthy.The pine forests are so green,unlike back home with all the beetle kill.Even here among all this sandstone,that healthy tree’s,mostly Pinion and Juniper,thrive so well. 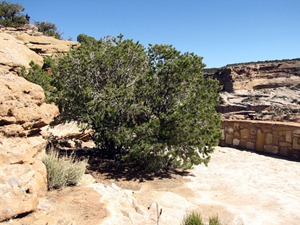 And for the birders,yes there were many around but they never sit still long enough to get a photo.I saw what looked like a flock of Junco's,but not sure,also a small woodpecker.

Some more ruins at the base of a cliff,with a distant and close-up shot.I sure like my Canon’s 20XZoom. 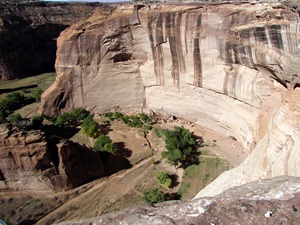 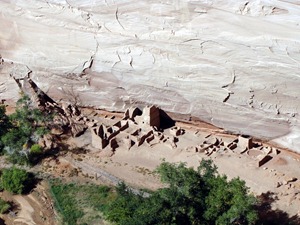 And of course the almost famous “Red Rag”must be in the picture. 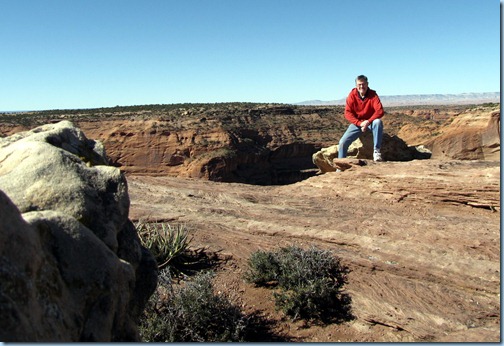 And on the way back to the truck,I stopped to talk to a young Navajo,Richard Charley, selling his wares,and purchased a small painting on a piece of sandstone,that he did.He explained what each symbol meant.They were old Anasazi markings. 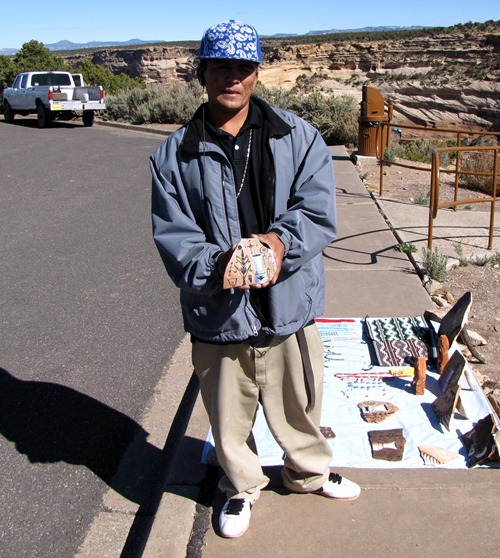 For a Navajo souvenir,it was worth 5 bucks.That small woven material behind him was like 45 bucks and only a foot square,so I took the rock.I had to ask him if the woven piece had a made in China sticker on it……

I got a bad sense of humour.

So today I will go to the south rim drive and try my hiking expertise and take the self guided trail down to the canyon floor to see the White House Ruins…..And to quote a very funny lady friend who took this hike a week ago……”It was almost an orgasmic experience”……..So we will see.

Posted by Wandering Willy at 4:54 AM