Harlingen. And The Iwo Jima Memorial.

I have always had an interest in war memorials and battlefields ever since the 4 years that I was stationed in France in the early 60’s during my Air force years.

We lived in a small town called St Mard in southern Belgium while based at 1 Wing (Fighter Squadron), Marville France, a 30 minute drive away,so we actually lived in a hotbed area of WW1 and WW2 history with many battlegrounds still closed off due to the live ammo still buried there.

We used to take weekend drives to the various battle grounds and cemetery's.Bastogne Belgium wasn't very far with its famous “NUTS” museum depicting the Battle of the bulge in WW2 and the American tanks that (at that time) sat at the entrance to the town. And of course the Canadian monuments in Vimy and Ypres.

I managed to dig up a few old photo’s of that visit,with our 2 girls standing in front of the Vimy Ridge monument, back at a time just before we got our Maple Leaf Flag.

The second shot taken inside the Canadian front line trench.These slides were scanned painstakingly one winter recently by daughter Kimmie,the little blond in the photos. 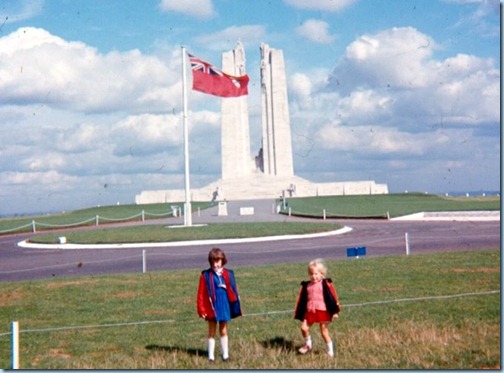 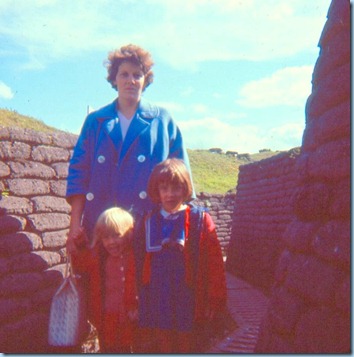 And another shot of the front line with the girls and I standing over at the German front line,which was actually closer than what the photo shows. 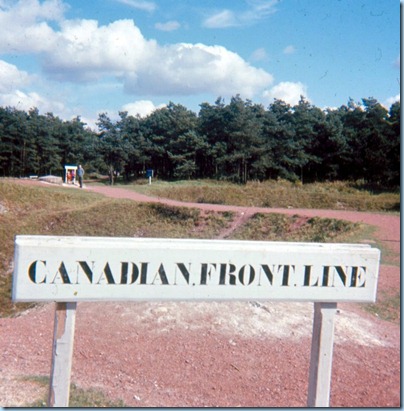 So now I’ve set the blog mood for another world war memorial visit, about an hour down the Rio-Grande valley from here.

Harlingen,named after the Dutch city,is a beautiful modern city of just under 60,000 and the Iwo Jima Memorial is situated near the city airport,on the south campus parade deck of the Marine Military Academy….It is by no means small as you can see by my size next to it……Very impressive…….Not me!….It 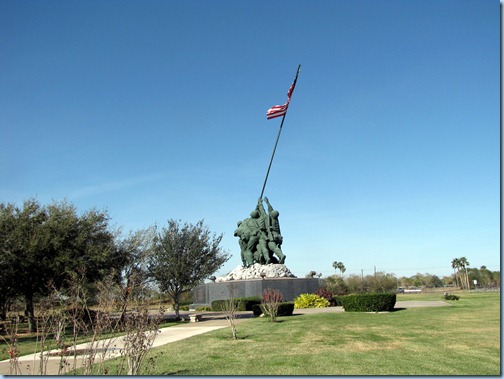 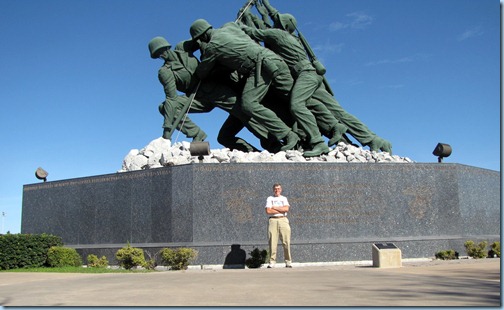 This full scale statue was the model for the casting of the Marine Corps War Memorial at the Arlington National Cemetery in Virginia,donated by the creator “Felix De Weldon.”

Buried next to the memorial is Harlon Block,one of the six flag raisers.

The plaque can explain better than me,the story. 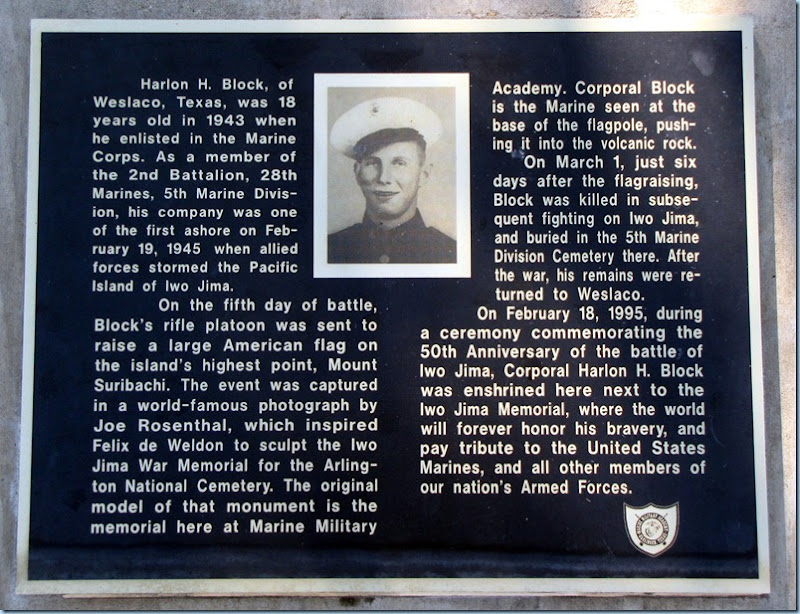 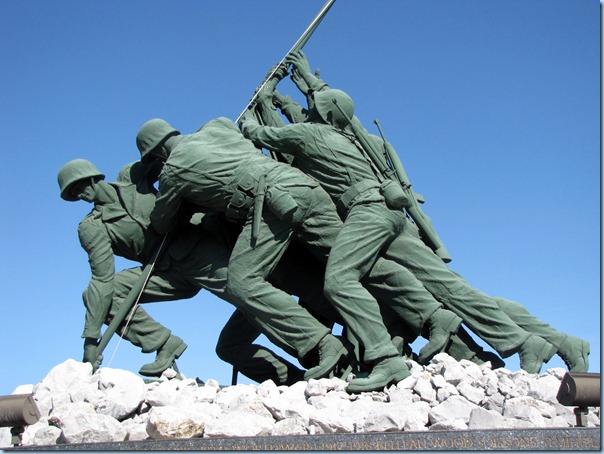 A more distant view through the trees of this beautiful park setting. 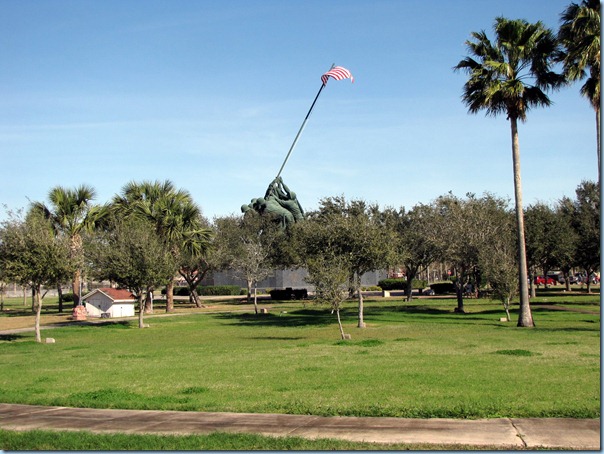 It was a beautiful warm day,so after a Burger King stop back in town,I headed south to Brownsville on the border.Drove through the historic,narrow, palm lined downtown streets,unable to stop and take a photo.(Isn't that always my excuse?)

I forgot to bring my maps with me and had a hard time finding the start of the Military Highway that follows the border back to McAllen.My sense of direction finally won out, but I still win the Darwin award because I had my Garmin with me and never even thought to use it.(Insert face slap)

The drive back was more of what I call “Mexico lite”with such a huge Hispanic population here,I saw so many similar business’s and lifestyles that you see on the other side,and of course the ever popular fence along the border. And even a couple of very slow transport trucks holding up a long line of traffic…..And as I finally got to pass them……You guessed it……They were Mexican plated trucks.

And I even had a few jousting matches with a couple of Mexican plated cars over for a visit.Thank goodness my 8 years of extended travel in Mexico prepared me for this day.

This is all true,but I wanted to have a little fun talking about the people and country that I really like,with hopes that soon I can take my 9th extended trip to old Mexico,instead of just looking across….Nuf said.

Now to finish off……..Last time I showed off my (Winter Texan) tee shirt and hat,well I still needed to get something for the truck,so off to the flea market I went.

I had a choice of 2 different decals,one like the RVer from Manitoba has on his car.You can have writing of your choice. 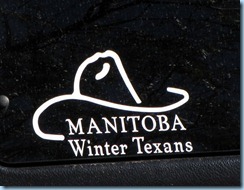 Or the one that I did select, that was a little less noticeable,but can be figured out. 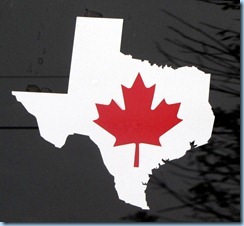 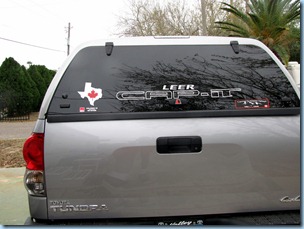 Well all my bragging about our hot weather has come back to bite me as an arctic front has settled in for the past few days, but is expected to moderate in a couple more days…..In fact at present,4AM…It is 3 degrees f. warmer at home.

Posted by Wandering Willy at 2:35 AM