We have been coming to this area many times over the the past 13 years of snowbird travel,and I cannot even count the amount of times that we have stayed here at Gilbert Ray Campground,which is a Pima County Park. 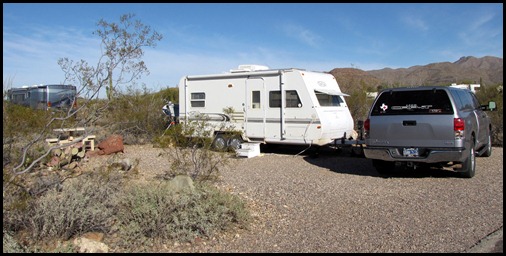 My site in C section.I seem to keep gravitating to this area of the park lately.

Some scenes across the road and down the road. 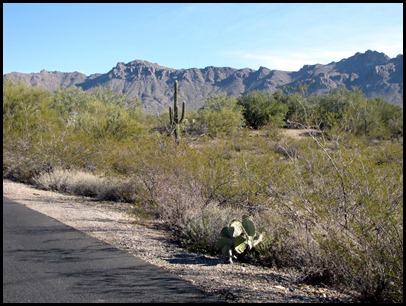 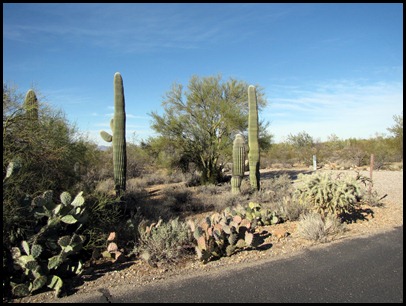 This park is very large and well spaced,costing $20. per night with electric and randomly spaced water taps.

And not very far away is the Saguaro National Park,so we share the same beautiful landscape.

Also just down the road is the well known “Old Tucson Studios”where many a movie and TV series was shot over the years,including the 2 John Wayne Rio Bravo movies and such well known TV series as Bonanza, Little House On The Prairie, and High Chaparral. 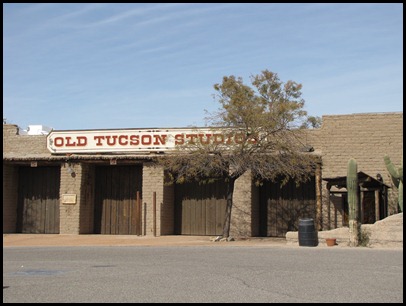 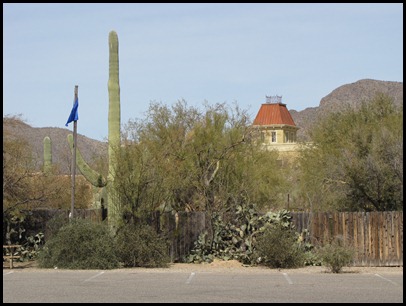 Its been about 10 years or more since I last had a tour inside and sat in Diamond Lille’s saloon being serenaded by one of the dancing girls,and watching the shootout re-enactments around the town and down on the High Chaparral set.

When I stopped in the parking lot yesterday just to take these pictures,I noticed that they still have the “piped in” movie, western sound, for effect.

And that famous mountain below,with my truck parked in front, has been seen in so many movies and TV as a backdrop……Many is the time you would see Hoss and Little Joe throwing someone out of the saloon with that mountain showing in the background….I guess its the biggest dead giveaway as to where the movie or TV series you are watching has been filmed.Watch for it the next time you see an old western…By the way two of the more resent films done here were The 3 Amigo’s and Tombstone. 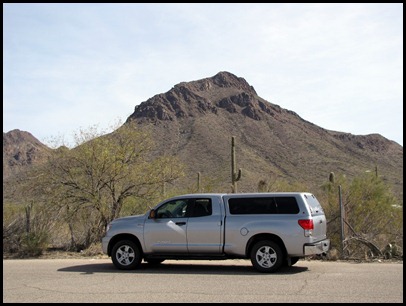 Since its Superbowl Sunday,I thought a little morning tour into the city was in order as I needed groceries anyway…I thought I would take the scenic route over Gates Pass…You can see the cut in the hillside where the road goes up and over in the centre right of the picture. 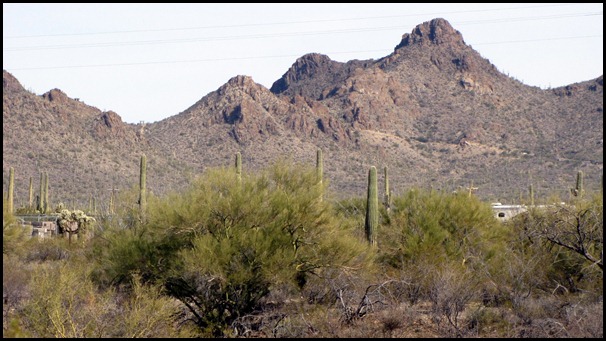 And a view from the top,looking down at Old Tucson Studios with a corner of our campground just to the right of it. 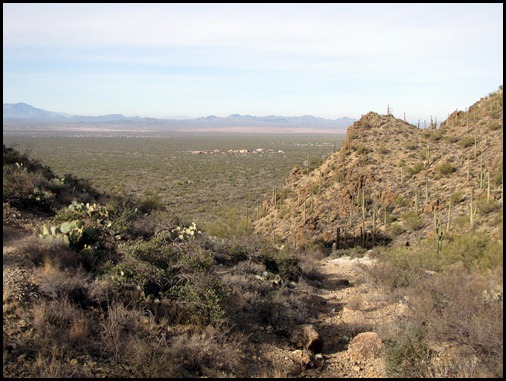 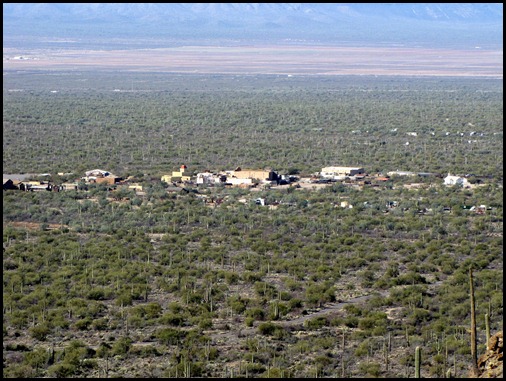 Then a look the other way toward Tucson,down in the notch below. 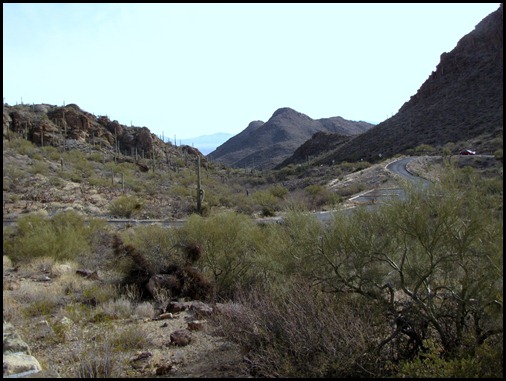 I spent a bit of time just driving around the downtown area as it was fairly quiet being a Sunday morning. 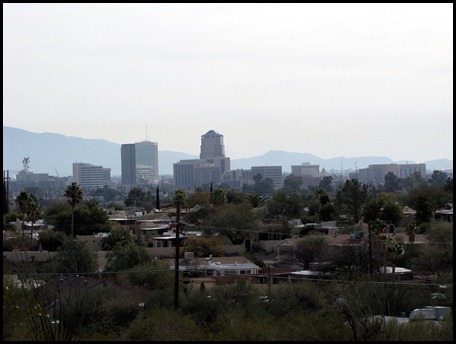 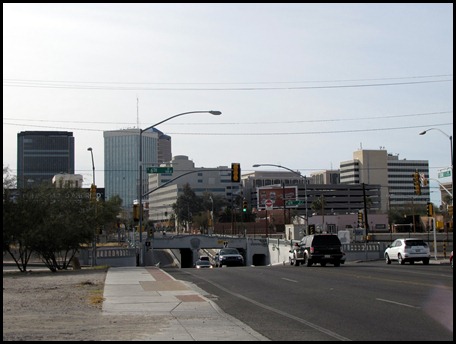 Then I decided to find where all the shopping was,so headed north on Stone Ave and came to Tucson’s biggest mall,called….wait for it…..Tucson Mall…2 levels and over 200 stores and almost empty because I always pick the wrong time to visit these things.Just a few stores were open being a Sunday morning,maybe I was too early.As I left at 11AM some others were opening but I wanted to get to a Bank and then find me a supermarket.

I carried on out the other side of the mall on Oracle drive into one of the northwestern suburbs called Casas Adobe where I found a small shopping mall with a bank and a Safeway store that would suit my needs being that I’m a Safeway shopper……Well… maybe you guessed it but……. 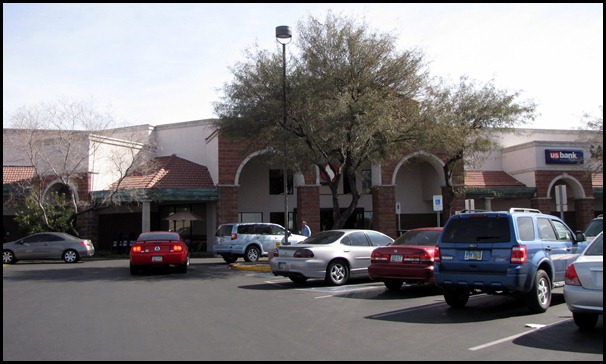 Yes…This was the spot that caught the worlds attention last January the 8th when an Assassination attempt was made on Congresswomen Gabrielle Gifford,wounding her and killing 6 others including a little girl…..Gabrielle had her kiosk set up right in front of the area where the red car has its tail lights on in the pic above.That’s just to the left of the Safeway entrance….There are no signs of the tragedy in evidence now,just a few signs in the store windows advertising a gathering in a weeks time for a heeling process.

I must say as a Safeway shopper,I was impressed with this store and its staff.Maybe they are still feeling the effects as they had to shut down for a week after the tragedy just to regain any composure.There was a quiet but friendly feeling among the staff members of the store.It seemed that every time I stopped and looked up at the aisle signs searching for an item,a staff member would be right there asking if they could help.

This seems to be a close knit neighbourhood store. All in all I found it to be a strange experience to be here after watching so much footage on TV during my stay in Mission Texas….I found it to be a much smaller shopping area than the TV view gave.

All in all an interesting final day here as I move on further to the west,positioning myself for the final run home in a few weeks…….Goodbye Tucson…I’ll be back.

Posted by Wandering Willy at 3:46 AM