Well!….That Was A Wild And Wacky Week!

Nothing like setting out for a 1000 mile trek and facing down one of the biggest storms to come along in awhile…..In all fairness to the citizens of the eastern half of the U.S. and Canada,I didn't have to face down the extremes that they had,but it was bad enough considering I’m down here expecting to be in shorts and flip flops,not my toque and heavy winter jacket.

All was nice last Saturday as I left Ivan to “hold the fort” on the beaches of Padre Island,and set off northward toward San Antonio,bypassing “the city of my Toyota trucks birth”, this time in favour of highway 173 which skirts to the west of the city through the very interesting town of Bandera and the Texas “Hill Country.” 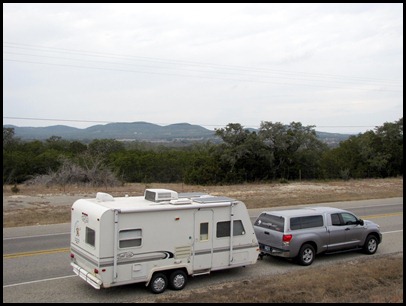 Connecting with Interstate 10 at Kerrville,all very pretty country that I must explore in detail some time.This day was cloudy and warm and getting warmer as I headed north west that day.

My first nights stop was another interesting spot that I didn't have time to explore.It was called the Caverns of Sonora,off the highway about 8 miles in the wooded hills.The small camping area was only $15 a night pull-through’s with electric and water.They were just closing the Visitor center when I arrived so I didn't have a chance to ask about this place that had deer running around everywhere,and the strange rack of birdhouses seen below.Of course its main attraction is the Caverns…Another time. 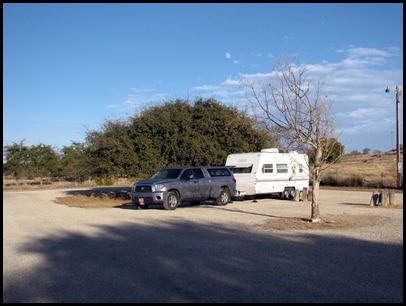 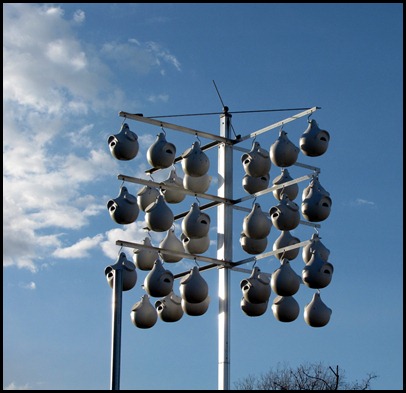 The next day dawned sunny and mild for this area,which did reach the 60’s as the day went on. Later that morning I crossed the Pecos river,no bigger than a ditch at this point and saw the landscape almost immediately change to the desert south west look.

Stopping at a rest area,I finally got a close up look at one of the many blades being transported for the big wind generators that are cropping up everywhere. 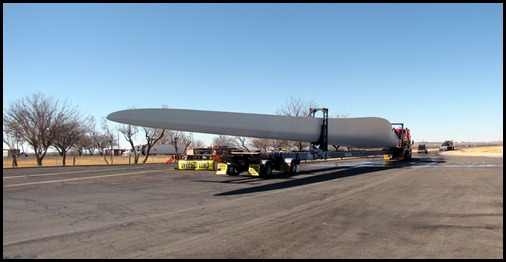 I’m still wondering where they are being manufactured.

The second night saw me at a dusty park in Van Horn Texas.Nuff said…The third morning,a little nippy, around freezing but sunny as I headed for El Paso,arriving in the mid morning.Its a good size city,but smoggy.Probably because of Juarez Mexico next door.The 2 are like one big city, as from a distance you cant see where one ends and the other begins….I guess I better give them some slack,with a total population of over 2 million and a lot of industry,its bound to be smoky and dirty.At the north west end of town I made a Wal-mart stop to stock up,not knowing how long I would be at my next stop which is a little isolated.

From the Wal-mart,it was just a mile more of I-10 and off I went onto highway 9 into New Mexico,following the Mexico/U.S.border on a nice desolate, but great 2 lane highway.The only activity I saw was the Border Patrol.My goal was to visit “Pancho Villa State Park,”a place that I’ve wanted to see for a long time.

I arrived just after lunch and selected a spot in this (1/8th full) park,and within minutes a nice friendly Ranger,who liked to tell “Canadian Jokes”……You know jokes about Canadians.

That's different,…..Or is it?..Anyway he warned me to batten down the hatches because a big cold storm is coming…..Here’s one of the nice spacious semi-circle sites with Ramada,water/electric, that they have for $14. a night. 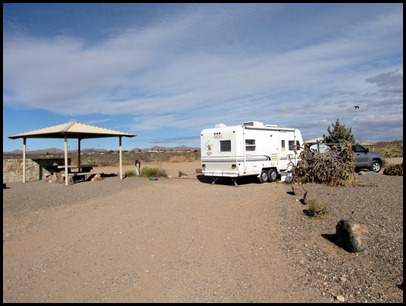 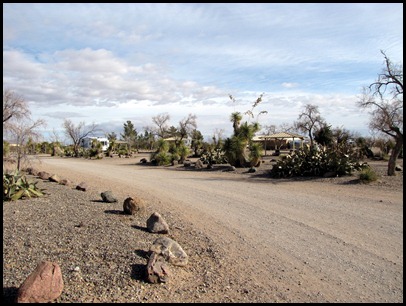 Then there was the next day…. After a night of high winds,blowing snow and the temperature plunging to 0 degrees f. or-17c…This is what we had. 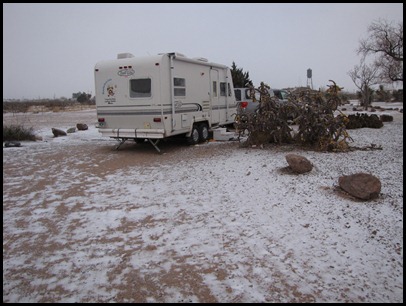 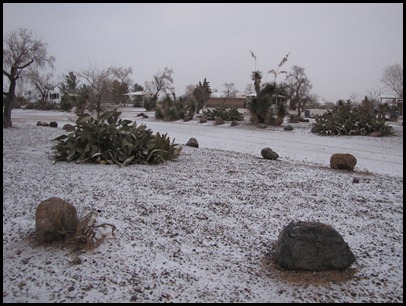 This condition lasted for 2 days with the temperature struggling up to 15 f. during the day,nowhere near a thaw,finally taking its toll on half of my water system,(supposedly good to 0 with my enclosed heated underbelly) the first day and completing the freeze job on the second day.

So on the 3rd morning with no water(Except a jerry can kept inside) and the furnace never stopping,I decided to make a run for it after going on-line and figuring where the nearest best temps were, within a days drive...And that was Tucson where they forecast a high of 35….I’ll take it I said to myself…..Throwing my frozen satellite dish cables,(all 6 of them) inside to thaw out while having some breakfast.There was no way you could coil them up.

At sun up,(finally at least some sun)I headed out with square wheels thumping along until they warmed up,and the furnace still running in the trailer.(not knowing how much damage my water system has sustained)I didn't want to cause anymore..Was sort of nice and cosy for pee breaks though.

I joined up with I-10 again at Deming New Mexico,30 miles to the north,watching my truck thermometer slowly rising as I headed west.As I neared Tucson dropping down from the generally 4 to 5000ft level of the past few days to a more conservative 2000ft,I gave a big cheer as the temp read-out hit 32 degrees and finally 35 as I reached Gilbert Ray Campground just west of the city. 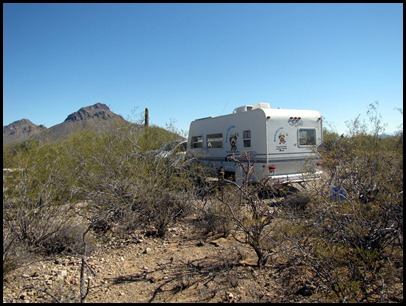 And within a few hours my water system was unfrozen and thankfully undamaged,so having the enclosed underbelly must have saved it some after all……BUT WAIT!…….I didn't show my little tour of Pancho Villa park before the storm hit……I’ll be brief….I know some of you have been there. 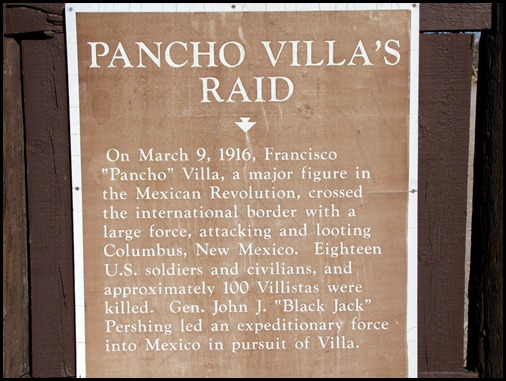 Now the park itself is part of the old military camp. 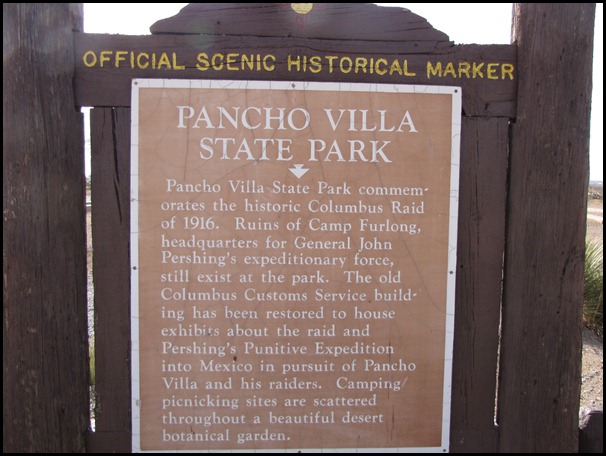 And below is a shot of Cootes Hill,a lookout point,then another shot taken from the hill looking down into the park,with Palomas Mexico in the distance. 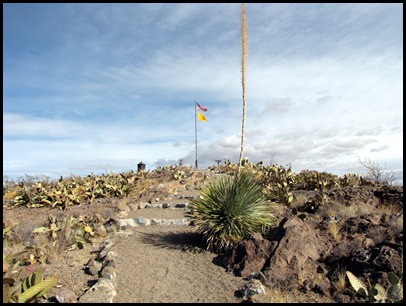 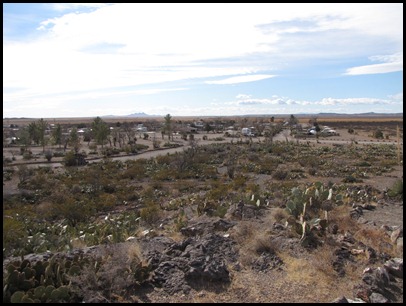 And another view looking down at the visitor centre/museum with the town of Columbus NM in the background. 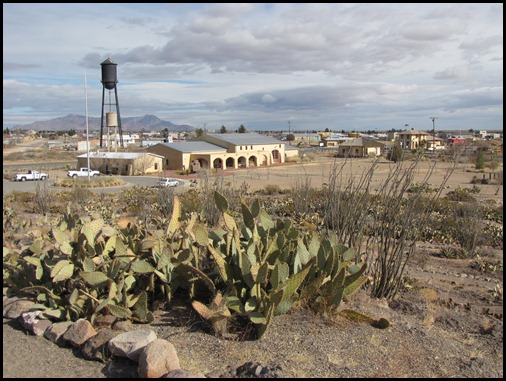 Due to the bad weather,I never got over to see the museum plus several other things,but will definitely be back during warmer weather…..It really is a nice, although a little dusty, park..See we even have our own garbage can at each site.

And a nice wall. 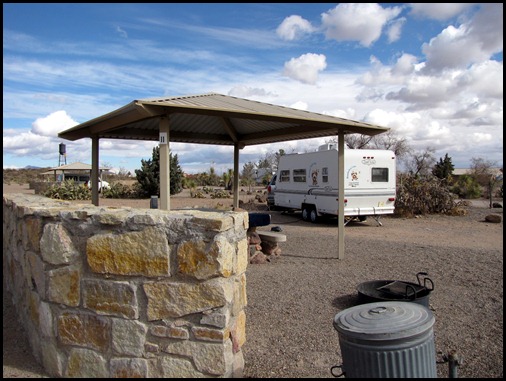