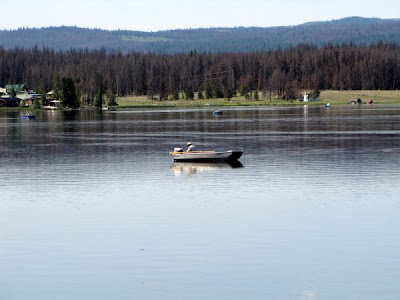 A parting final look at Tunkwa as I left at 8a.m. yesterday on my new adventure to unknown areas of this, my home province.I guess I've only seen about half of this province,mostly the southern half.
I arrived at the Logan Lake dump station(pay by donation) nice and early and was able to have the place to myself(several r.v's arrived just as I was leaving)I like it when a good plan comes together.(quote from Hannible on the" A Team" t.v. show).
I backtracked the way I originally came in almost 2 weeks ago,taking the Highland Valley route back down to Ashcroft,then north.
I was able to take the time and stop for a few pic's of the big "Highland Valley Copper Mine"operation here.Looks like a giant red flying saucer on the hillside. 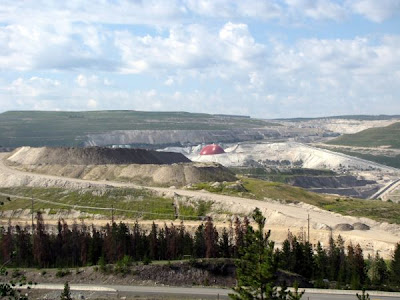 A closer look and it still looks like a flying saucer.I was able to get some shots from a viewpoint parking area off the highway,although I missed the turnoff at first and ended going up the hill on a mining road and hit a big dip in the road at a good clip, that set both truck and trailer into an airborne position....not good,had to go into the trailer and pick up many articles from the floor(slap wrist here) 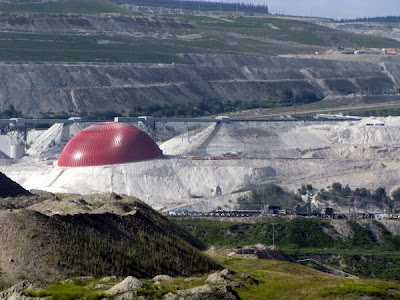 Below is a lake several miles long that is full of mine tailing's....The only blue water left is at the dam end. 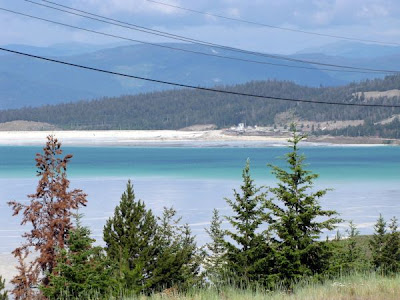 The drop down into Ashcroft was steeper and longer than I realized coming up(all that silver bullet power I guess)so going down was a little white knuckle,with plenty of low gear and brakes to the point that truck was pulling a bit to the side each time I hit the brakes...no fade though.
Perfect driving weather as I headed north on highway 97 through Clinton and 100 Mile,boy 100 Mile sure has grown since the last time I was through here, as was Williams Lake,they were like sleepy little towns before.
I stopped for lunch just north of Williams Lake beside a small lake.
I hadn't gassed up yet and it was getting low but figured there would be gas between here and Quesnel.(holds 100 liters).Well much to my surprise,every gas station along the way was closed up(economic times I guess).At the last one I chickened out as the low fuel warning light had been on for some time, and I got out my jerry can with 8 liters in it,and dumped it in for the rest of the way to Quesnel.
When I fueled up it only took 78 liters to fill it,which meant that if I hadn't dumped in the 8 liters from the jerry can,I would have arrived with 14 liters still in the tank.
I did a U.S. MPG calculation and it worked out to 14mpg pulling a 4000lb trailer with a fully loaded truck box on several big climbs and at an average of 100kph(60mph)
That would equate to around 17mpg imperial.My Astro van never got that high a mileage pulling the trailer.......but.....the Astro got better highway mileage than the tundra does when not hooked to the trailer. So I guess its a trade off.
I arrived at 10 mile lake provincial park just before 3pm and found the lake- side sites full, but back up the hill in the touring sites away from the lake,it was almost deserted.This was good because I could take the time to jump out with my compass and find a site that had good southern exposure so I could set up the 2 satellite dishes,as I did, and with the "align-a-site" instrument that I have,was able to site through the trees for both dishes with no problemo.Oh the joys of having toys! 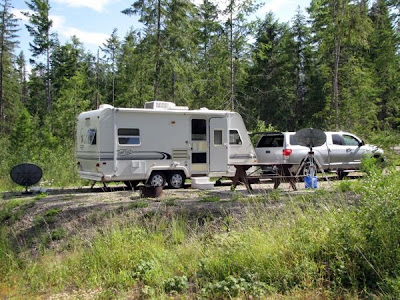 So today I think I'll move on as this place doesn't have too much appeal,not even any bird activity,just a robin lulling me to sleep last evening.Also starting to notice a later sunset with just one days drive north.
Had an awfull time this morning changing the side bar stuff(weather/map)etc,its just a fact of getting old that something I did with ease last winter takes a large refresher course to get back into the groove again.I hope its ok,haven't looked yet.....See ya at Fraser Lake.

My Present Location on Datastorm/Google

Posted by Wandering Willy at 4:15 AM