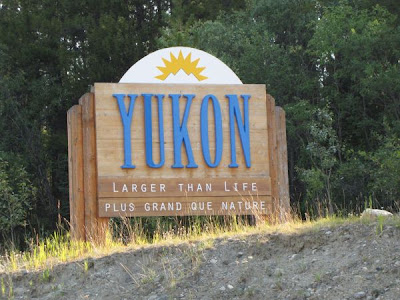 I got an earlier start out of Boya Lake yesterday,figuring to get in as much driving as possible while its still a little cooler.That last 50 miles of the Cassiar had some gravel patches so I slowed down for all of them just in case there were any real rough drop offs like the one I hit the first day out of Tunkwa......Well I slowed down for all but one.....This one was over a rise and not seen until the last second....and you guessed it.....A doosie...I had doors open in the trailer that have never opened before while under way.Anyway no damage found so far.
A quick top up of gas at the junction of the Alaska Highway(no more pre-pay...Hooray!)The Alaska highway was nicer than I expected as I rolled westward,more traffic of course,mostly r.v.The countryside was Rolly like the foothills of Alberta with an altitude around 2000 ft, and for awhile no mountain was in sight.I had forgotten that I was actually east of the great divide,which I crossed coming out of Dease Lake on Tuesday.After awhile you start to see the mountains looming in the distance and the highway takes a 42 mile dip back into B.C.It was while I was on this stretch that I made a rest stop and found this interesting bit of info below.This is Simpson Peak. 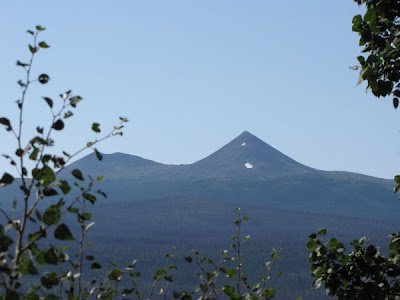 And here's a bit of an explanation on how it was formed. 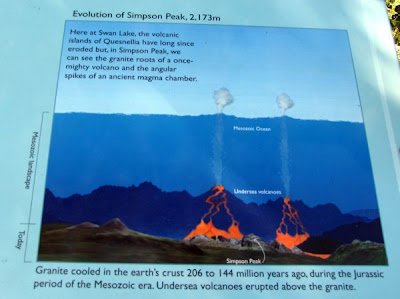 Below is another stop.....These next 2 photo's have been done to death by other bloggers and in Yukon guide books,so I will add my perspective.Below is the rest area on the hill above the Village of Teslin. 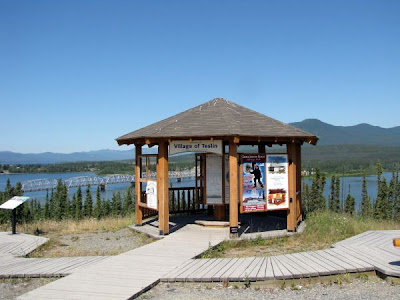 And this is the Nisutlin Bay bridge,the longest water span on the Alaska highway,1917ft/584 meters and boy did the metal grate decking ever ever throw me around,I was glad no one was coming the other way.
It was just west of here that I had planned on making my stop for the day,so I started checking out a few government campgrounds,but found them hot and dusty with a look of being well used and if I wanted to set up my satellite dishes,there could be a problem with all the tree's.The only good site for that in the first campground I checked, was just taken by some clown that earlier had been nipping at my heels,tailgating me on the highway.....I had gotten tired of him and let him pass...so he took the only spot I would have taken.
It was getting hotter and all the campgrounds were not to my liking,so I figured,instead of making this a 2 day trip to Whitehorse,I'll make it a one and go into an r.v.park and enjoy my first full hookup since setting off on this little trek a month ago.I was able to make good time on this highway and around 3pm,arrived at the Pioneer R.V. Park a few miles east of city centre....The city limits extend out into the boonies. 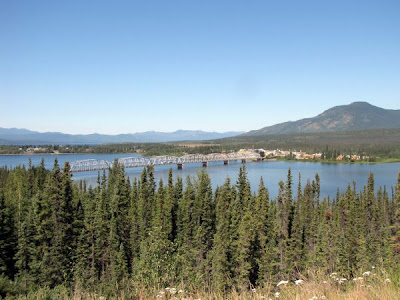 And here I am in a dusty,dirty,parking lot style,$28. a day spot in 33/90 degree heat with all the big boys....BUT...Was that air conditioning ever nice!I had had enough heat for awhile and enough bugs for awhile,because in those nice lakeside parks,the bugs would sometimes drive you inside....then the heat would drive you back out to the awaiting bugs....just a vicious circle.So I'll spend a few days enjoying A/C and no bugs. 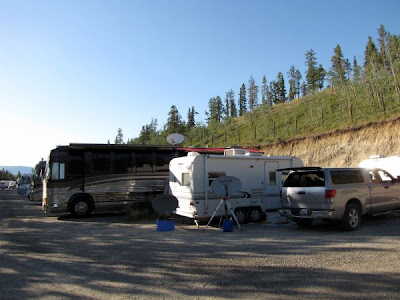 For those of you who travel with a Star-Choice T.V. system,I found quite a large drop in signal strength here,maybe its my location but I couldn't muster much more than 28 with most stations breaking up,so in the evening when the sun wasn't beating on me,I tried tweaking it and finally got it to 37 and no breakup,but boy! it was soooo touchy.You'll note that my neighbor from Oregon has the datastorm internet dish on his roof as does his neighbor,in fact when I set up mine,I found about 5 other signals,half of them unsecured,so really I guess I didn't have to set mine up.They will probably leave before me anyway,so just as well.
So....today we will see what Whitehorse has to offer.