The Day That Willy's Camera Died 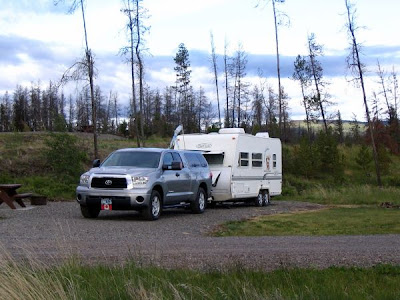 Yesterday was my first day trip since arriving here at Tunkwa,so a trip down to Kamloops was the order of the day.I set out at 9 a.m.with a cool cloudy temp of 52/12 degrees.I thought since you can go several ways,to head down the back road to Savona rather than through Logan lake and the Coquihalla.This was my first time on this section of road since the 70's when it was washboard gravel.Now a narrow paved road leading down into the valley below...a 2000ft drop over 26k's....I never met another vehicle the whole way.
Below is one of several ranches lower down in the sagebrush country. 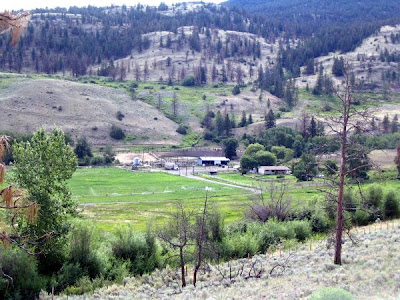 The road meets the #1 Trans-Canada on the eastern outskirts of Savona...pic below.
A CPR coal train passing through. The temperature down here was 64....12 degrees warmer. 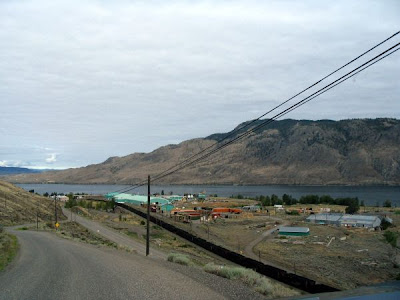 First I drove a few k's west to check out the "Steelhead"Provincial park at the west end of Kamloops lake and the town.It looks like one of the older private parks that has been taken over by B.C. Parks and I believe is on First Nations land. It was only about 1/3 full,surprising for a lakeside campground in July.Many of the sites were side by side with no spacing(wal-mart parking)this probably being the reason for low turn out. 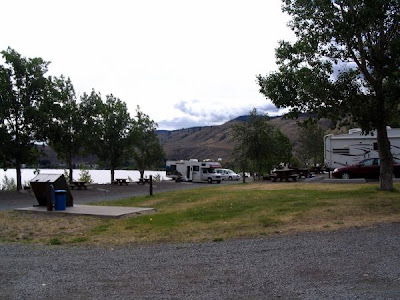 I now headed eastward toward Kamloops along the T-C about 35 K's making one stop just east of Savona at a pull off to take a couple of pic's of kamloops lake.
And that's when my Canon A75 died,so below are the last 2 pics it will ever take.
Of course I didn't realize this until a couple of hours later at Lac Le Jeune campground on the way back. The picture's were faded but using Picasa's "Make me lucky"setting brought a bigger difference than normal with the blue of the lake which was sort of grayish to the naked eye and the sagebrush in the fore-ground is sharper. 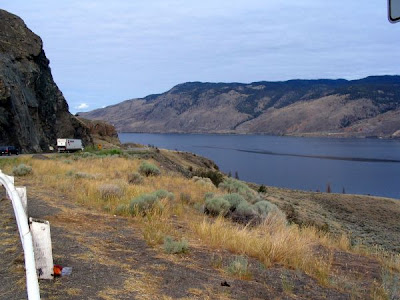 I carried on unaware of the camera problem which just showed purple horizontal lines in the LCD.A battery change and flash card change didnt solve anything.
I took several more shots while in Kamloops but not checking them after.
I did my grocery shopping and toured the downtown a bit then gassed up and hit the "Albert&Walter for some fast food lunch(I am partial to Mozza burger combo's)
It was now noon and a nice low 70's partly sunny day as I headed up the Coq. for Tunkwa,making a round trip of it.The silver bullet just flew up the hill through rain showers and lowering temps,back to 52 degrees at the top with heavy overcast.
I passed a poor citizen half way up with an older Ford pickup pulling a 25ft travel trailer and I could see the black smoke a mile before I reached him,just pouring out of that truck....I wonder if he made it to where he was going.
At the top I made a side trip into Lac le Jeune provincial to have a look and take some pic's down at the beach area,and this was when I realized the camera wasn't working.
This campground was only about 5% full and missing many tree's also since my last visit years ago.
So that was my day trip,and today probably another to go shopping for another camera.I came home and went on line and did several hours of research on cameras plus a couple of e-mails to camera buff friends who promptly sent replies.
My first choice will be another Canon...The SX10...I read about 50 reviews,just about all were favourable.Its also the #2 best seller according to P.C. World.
So the next blog hopefully will have better pic's....I needed an excuse to get a camera with some good zoom capabilities anyway. 20X optical sounds good to me instead of 3X on the A75.

Posted by Wandering Willy at 4:38 AM