200 Miles Beyond The Arctic Circle And Back......What A Fantastic Ride!

I've been off line for the past 4 days due to being outside of my satellite footprint,so I would like to go back over those days with blog entry's over the next few days until I catch up to the present time.Above and below you will see illustrations of the elevation changes over the 465 mile/734 kilometer gravel highway that extends from the Klondike highway near Dawson City Yukon....all the way to Inuvik N.W.T.200 miles inside the Arctic Circle and 50 miles from the Arctic Ocean.

As you can see,there are a lot of ups and downs,but WOW!What a ride!I wouldn't have missed doing this for anything if I'd known just how fantastic the scenery was going to be.I've seen a fair piece of North America and Europe,but the breathtaking views I've seen along this road are right up there with the best of them.The one disappointing thing is that normal photo's are not going to do justice to much of the scenery because of the broad expanse of most of the views and smokey conditions.
I guess If I had the time and patience to do "photo stitch,"I could come close.
I last left off at the Tombstone Campground,just at the 71k marker,so not too far up the highway yet.
I got a nice early start out of the Tombstone campground and immediately the first climb begins,up to 4000ft from the campsite's 3000ft. to North Fork pass.Below you can see ice still in the river.I wouldn't be surprised if this stays all year around because several small pools nearby do. 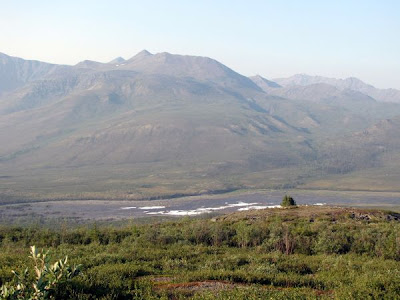 This is really the start of the Beringia area mentioned before,(an un-glaciated area) 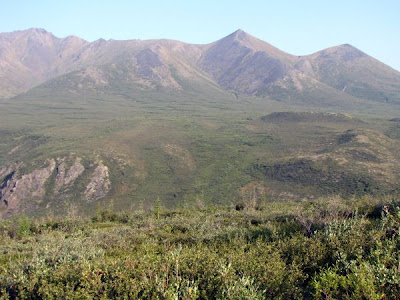 Next we drop down(I'm going to use "WE",it feels more natural),on to the Blackstone Plateau,a rolling uplands covered with willow and birch shrubs and dotted with small ponds,rich in bird life in the spring and caribou in the fall.
This tundra just seem to be full of clean little streams everywhere you look. 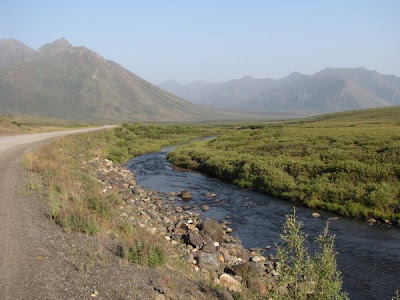 (Km. 102) Moose are not abundant here but are sometimes seen.This is a great lake for waterfowl viewing,but not too much the day I was there,just a few ducks. 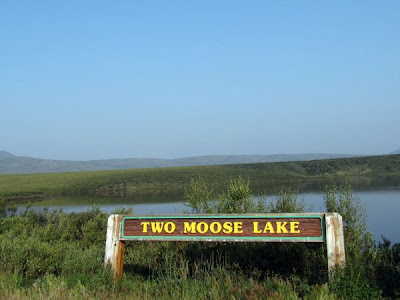 Along the road a little further,I came across a pair of Ptarmigan,who were not interested in doing a "photo op" but did stand fairly close for this shot while mama was hiding in the thicket. 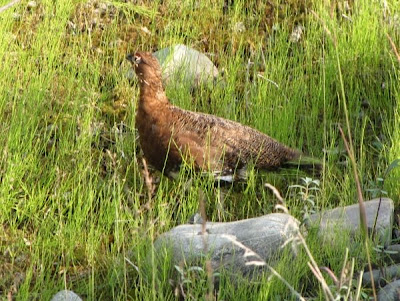 (km.200) These outcroppings are called "Tors",un-glaciated rock that would have been swept away if glaciers had been in this area.That mountain behind is all loose rock,a very strange sight when you come upon it. 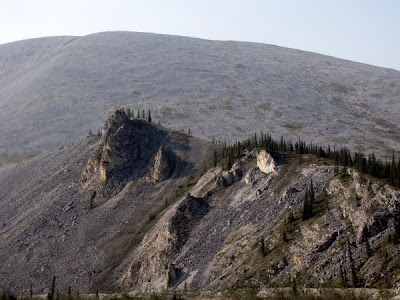 In the same area I noticed these 2 Dall Sheep,sunning high above me. 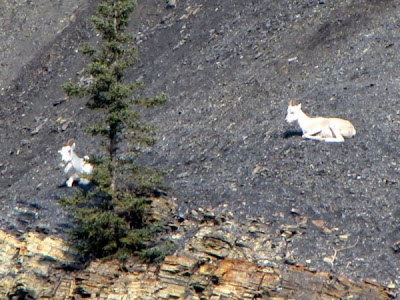 (km.245)Just after this point we leave this upland valley and climb up another 1000ft onto the Eagle plain.It is here that we will stay for the next 200k's
It makes you feel like you are on top of the world,as everywhere you look.....you are looking down into vast sweeping valleys with mountains in the distance.And to make the top of the world feeling even more so....is the fact that the road is elevated to protect the permafrost,so its like driving on a berm.I took no pictures here because of the smoke in the air cutting visibility,but with the naked eye its breathtaking.
(km369) The Eagle Plains Hotel and service area (below) is my stop for the night,as its the first service stop since the start of this highway.The whole complex sits high on a narrow part of the ridge only a couple of hundred yards wide,with a huge drop on either side.
Its a nice modern, well equipped hotel and restaurant.You step inside and you realize you are back in civilization,if only a little bit.The gas pumps charged $1.35per liter,5 cents cheaper than the Klondike highway station at the start of this run.All the service area's along this highway have "tire shops,"self explanatory,as I had my problems too.

This is the camping area at the far end of the complex.$15. with electric or $10. without.I took electric and glad I am as this was when I found that my fridge was not working properly and everything was thawing out in the freezer,so I was able to switch to electric and it started to come back.The strange thing was that I had what looked like a good flame at the burner and since then have come to the realization that it probably isn't good enough.I switched back to gas for the run to Inuvik the next day and it seemed to hold its own a bit on the gas setting and I thought I was ok,but last night when arriving back at the km193 point on my return run,have found the gas just isn't doing the job.Probably dust in the orifice as the conditions for dust are the one big downer of this trip.It just piles up everywhere inside every nook and cranny.
So there you have it,by later this morning I'll be in Dawson City,hopefully in an R.V.Park with electric,so I can try and fix this fridge problem while set on electric,if not,in a few days I'll be back in Whitehorse and will take it to a dealer.I also have to get the Tundra into the dealership there for its overdue first service.
So on my next 2 entry's,I will cover the fantastic experience I had travelling across the arctic circle an into the Mackenzie delta of the Northwest Territories to the town of Inuvik....stay tuned.

Posted by Wandering Willy at 1:18 AM