Day 2 Of The Whitehorse YT Tour 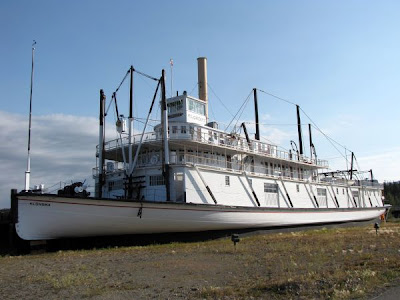 I meant to get this blog entry out yesterday but ran into trouble when I tried to load my photo's into the laptop...It seems I've been running amuck and filled the disk on the laptop,so,had to find what I already had on my memory sticks and delete those.And be that as it may,still lost, through carelessness,some of my pic's.
Above is the "Klondike" on display at a very nice park (Rotary Peace Park)near the entrance to town.This seems like a popular spot for joggers and dog walkers.Below is the very swift running Yukon river....looks deep here too.This was taken beside the "Klondike." 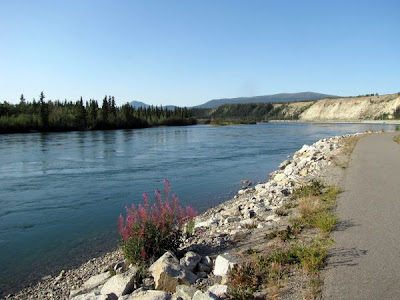 Another shot showing some of the park. 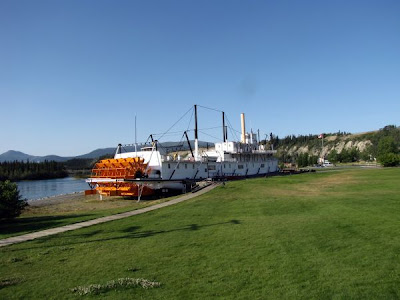 Next,I decided to explore across the river as the bridge was next to the park,so I drove over and discovered a real pretty subdivision to Whitehorse, called Riverdale.It had it's own small shopping area and some beautiful homes carved out of the forest,like the one below. 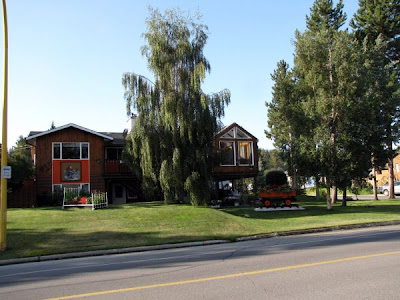 Next stop,the quite large and very beautiful visitor centre in town.I was really impressed with the inside of this place,and the size of it.This picture only shows 1/2 of the building. 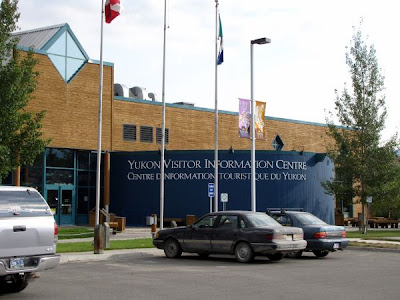 Now its off up the hill to the airport to check out the "Transportation Museum" and the Beringia" Centre.Below is and old mounted "Dakota."Sure takes me back to my Air force days where I spent many hours riding in one of those. 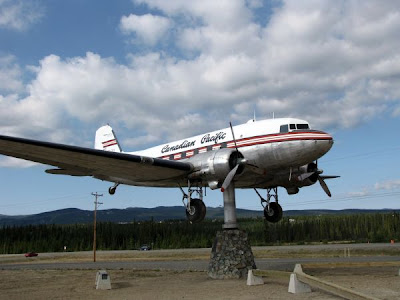 I was the first one into the Transportation Museum...I like it when I have these places to myself.Many interesting displays of what was used to build the Alcan Highway,plus other displays of travel modes,and some real interesting films.I especially liked the one on building the Alaska Highway with all the actual footage. 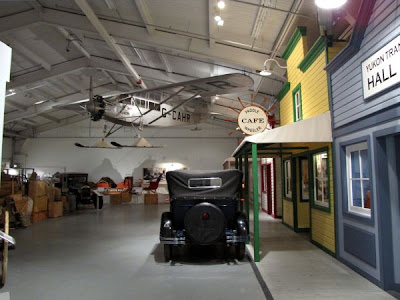 There were 2 large rooms filled with displays..Probably old hanger space as this was on airport grounds. 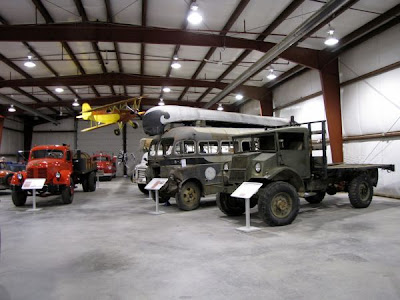 Then I went about 1/4 kilometer over to the next parking lot where I found the Beringia Centre,using my 2 for 1 entry ticket.I had not heard this term "Beringia" before travelling up here.In a nutshell,it was during the last ice age,a large part of Alaska and some of the Yukon did not receive any ice and was protected as the mile high glaciers formed a mountain of protection from the weather for this area, which was a mild weather grassland where roamed the Woolly Mammoth and Giant Beaver among others.
Inside is a skeletal Woolly Mammoth among many of the displays.I also watched an interesting film. 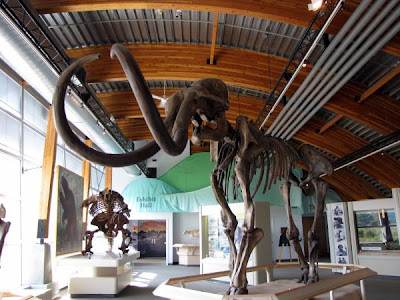 It is now noon and the old guy needs his once every week or 2 fix at the A&W,thought I would try the new Sirloin Uncle Burger..........SERIOUSLY!.......LOOK AT ME. some of you will get this.

Before leaving for lunch I had to visit 2 new friends.
JUST "WOOLLY & WILLY" 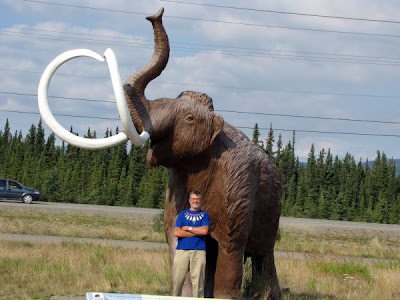 And of course I had to have a "TOOTH-OFF with the Giant Beaver. 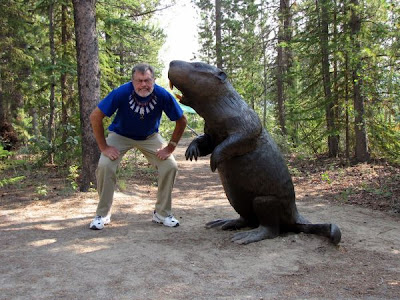 I am now about 80 miles north of Whitehorse,as yesterday and today are travelling days.The smoke from forest fires was so bad yesterday while driving that I was getting a sore throat,but when I stopped here at Twin Lakes Govt park,it seemed less concentrated once I got out of the truck.This was the nicest of the 3 parks I looked at so far on this Klondike Highway to Dawson City and also the only one not crowded....Go figure! MY GOOGLE LOCATION