Inuvik....The End Of The Road 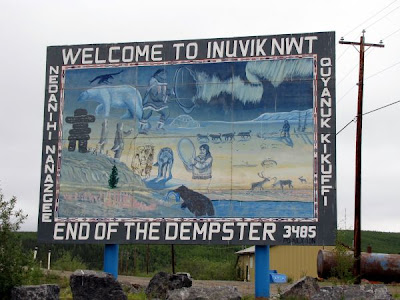 The last 97 kilometers from the ferry to Inuvik was a long boring flat stretch heading north toward the the Arctic Ocean....Don't get me wrong,it has its beauty.....Dotted with lakes and ponds and scrub forest of black spruce and tamarack,this ecological region is 50%wetlands.No pictures,it was pedal to the metal.......I want to get this over with as I was now travelling at 60 miles per on this fairly smooth gravel road kicking up great clouds of dust,50% of which was entering my sealed up trailer,and cringing every time someone passed me as the rocks flew toward me......praying that the windshield on this 3 month old truck was going to survive. 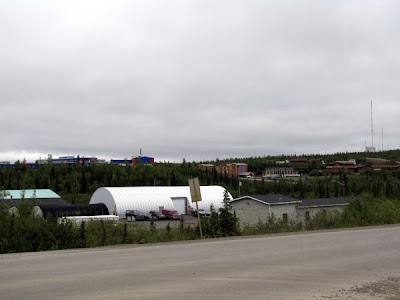 Finally I come upon a fairly large and modern looking airport....with a tower and everything,(still no pic)and low and behold.......PAVEMENT!.......HIPPY DIPPY PERMA-FROST HEAVE pavement......I had to slow down because it was like riding a bucking bronco...Everything in the trailer was in places that they shouldn't be.
The temperature was a nice sunny 73f. as I drove up the main drag of this town of 3485 citizens,bustling with people and traffic,even a middle aged native fellow riding his bike up the middle of the main drag...no hands...texting.....sheesh!....civilization northern style.I found the Happy Valley Trailer Park just 2 blocks off the main drag and set-up,fighting off the little sticky black flys that even crawl under your glasses where you cant swat them.....there itch stays with you for days......I've got the scabs to prove it, still.Reminds me of the Jeh-jeh nay's in Mexico.(no see-ums). 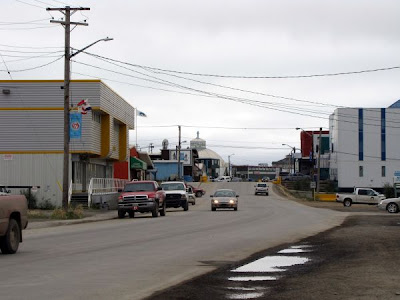 All photo's shown today were taken the next day,which was a drastic change in the weather....cloudy and cool with a blustery wind in the 50's.
Below is the much photographed "Igloo Church" 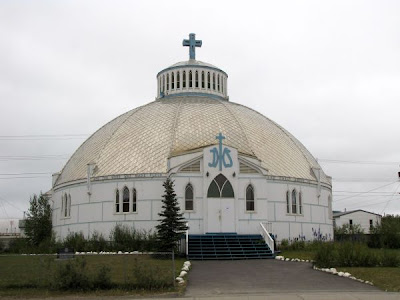 When I was getting ready to go and wander the town the next day...I found the trailer tire that I added air to the day before,was going flat,so jacked up the trailer and removed it,setting off to find a tire shop.I drove up and down and all around looking for the one and only gas station in town,finally finding it on a side street.
I spent about an hour there as the very nice,native chap(This is Dene country)handled both tire shop and gas station(can you believe...it they even had "pay at the pump")at his outdated looking station.He found a small sharp stone about the size of my baby finger nail,had worked its way through the almost new tire,causing the slow leak.Boy! If this can happen....what can I expect on the return trip? 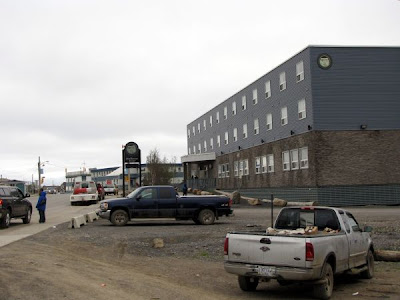 Above and below are some views of the downtown of this sorta scruffy place...I found as I entered the local (mini-Wal-mart style)store,that everything is sort of dirty and well used..I didn't even like grabbing the door handles to enter.The stores where fairly well stocked...I was a little disappointed that after entering several shops,that I couldn't find a souvenir tee shirt that had Inuvik written on it.....finally finding one that sort of fits,in the local Rexall drug store.
I don't want to give the impression that I'm running the place down....I found the people to be very friendly,many saying hi on the street and at places like the gas pumps,people would strike up long conversations with me.This is a Govt. town,so has a strange mix of Native and White's living together.Its not an old town,it was conceived by the Canadian govt. in 1953 to replace the town of Aklavik because of flooding.Today its the administrative and commercial centre for the Western Arctic,and Canada's largest community north of the arctic circle. The town peaked in 1990 during the oil exploration boom at 4200 people.
All the buildings are built on pilings above ground because of the perma-frost,most nicely hidden by skirting. 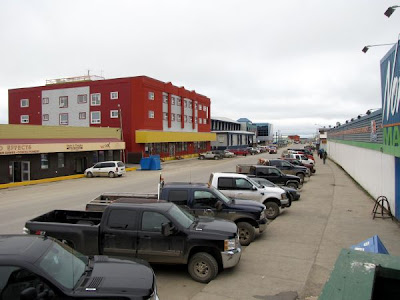 Some interesting facts that I found about this place that is less than 50 miles from the Arctic Ocean,is that its actually 10 degree's further west than Vancouver....like that's about 500 miles west!And to top that...its on mountain time.
Some more flower identification please.Taken in the campsite. 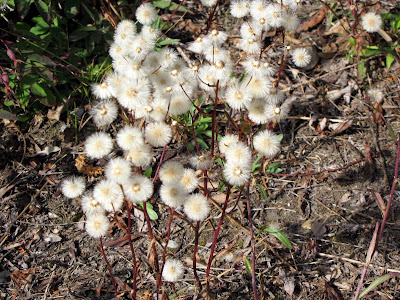 And some more below. Click to make larger....I added a few extra pixels. 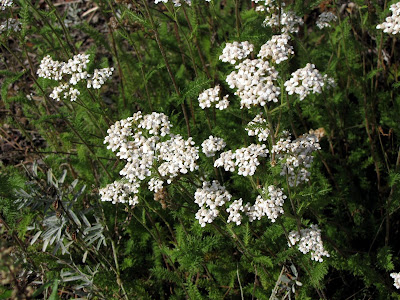 Some of the things I found that I had to get used to, was the noise factor...The old saying "make hay while the sun shines"seems to be the norm here as there is no darkness this time of the year.I missed the the 24 hour sun by just a couple of days,but the nighttime was still broad daylight and the people of this town are still doing there thing outside at midnight.You could hear kids still playing at that hour and the traffic never stops.It does quieten down around 2am,except for the multitude of dogs barking all night.I thought I was back in Mexico although I didn't hear any roosters crowing.
The picture below is not because I'm full of myself(well maybe a little,heh,heh)Its because I couldn't sleep,so I came back outside at the stroke of MIDNIGHT to take this photo of myself sitting in the sunlight...The sun was actually still a few degree high in the sky. 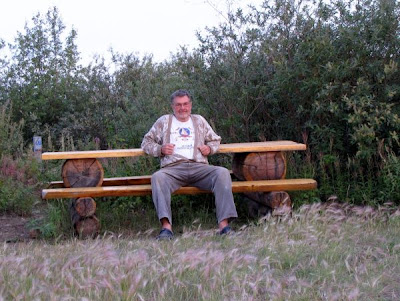 It doesn't seem to show too much in this shot below, as the sun is behind the trees.And the photo doesn't really show how light it really was.Dam camera,heh heh!
Well tomorrow,the long trek back... 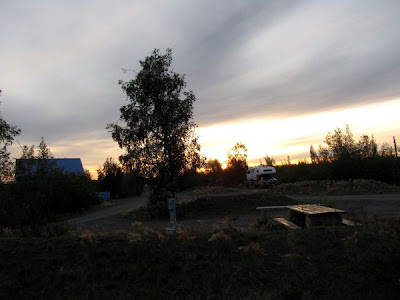 Just a little added info.Some of the other travellers did what I considered doing but didn't.And that is to take that last 50 miles to the Arctic Ocean on the Beaufort Sea.The only way in the summertime,is to fly or take a boat up the Mackenzie river to Tuktoyaktuk.One couple I talked to were going to take the boat up and fly back.....I guess all it takes is money.......but it is a once in a lifetime thing I guess.In winter you take the ice road,but who wants to be here in winter? One other little charming thing, are the local radio stations up north.


Posted by Wandering Willy at 2:53 AM