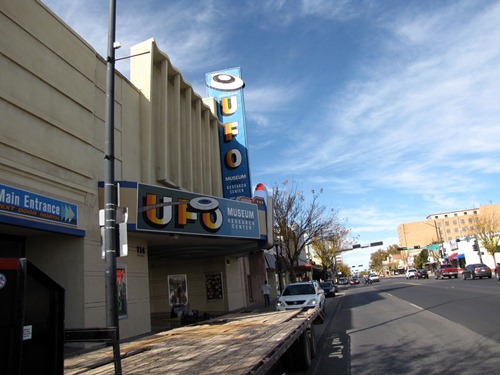 The museum looks like an old movie theatre….I’ve been waiting a long time to visit Roswell and see what collection of things they had, but was a bit disappointed.Most of it was several walls of old newspaper clippings,recordings of radio news from 1947.Copies of sworn affidavits from eye witnesses who actually saw the UFO and the bodies.The craft was the size of a Volkswagen beetle,and the 3 dead and one survivor were about 4 feet tall and looked like this movie prop that they had on display.There must have been 8 or 10 movies made about this incident over the years. 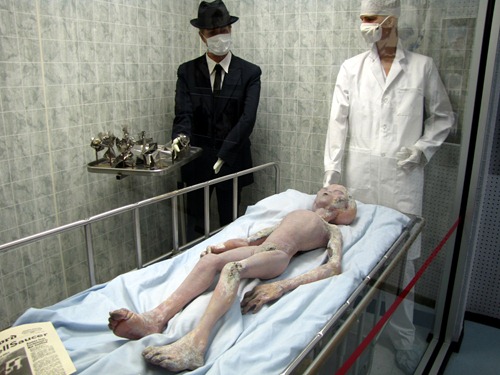 Actually there was quite a bit of interesting reading.I truly believe that all this did happen because the government cover-up was just too aggressive.If it had been a weather balloon like they tried to say,peoples lives wouldn't have been threatened like they were.All evidence sure disappeared fast.

It is of course a UFO Museum in general,not just the Roswell incident…Actually the crash was about 50 miles north west near the little town of Corona,at the foot of the Cibola National Forest,but everything was brought to Roswell and the Army Air Force Base.

There were many UFO photo’s from all over the world,including a few from Calgary back in 1967,at the same time I was stationed in Moose Jaw Sask.And It was in that time period that I also saw my first UFO sighting.The second one for me was just a few years ago over Lake Okanagan….So you see I’m a believer.

Back to the Museum as I digress again.Below is a diagram of the writing found on an I- beam of the crashed UFO.

And below, what looks like the original Mayan tomb door from Palenque Chiapas Mexico where I visited last January.This with a description of what the carvings mean.Linking to the Chariots of the Gods. 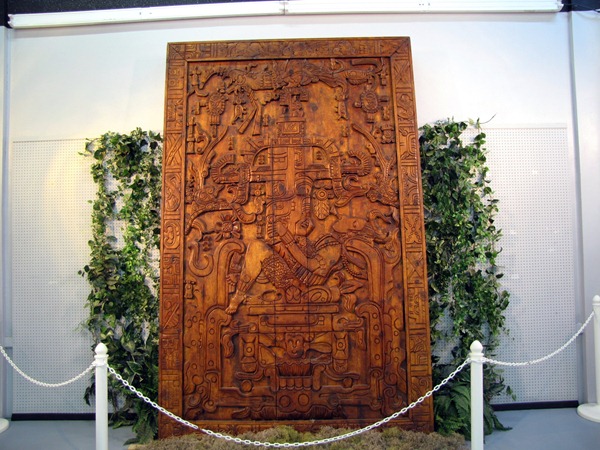 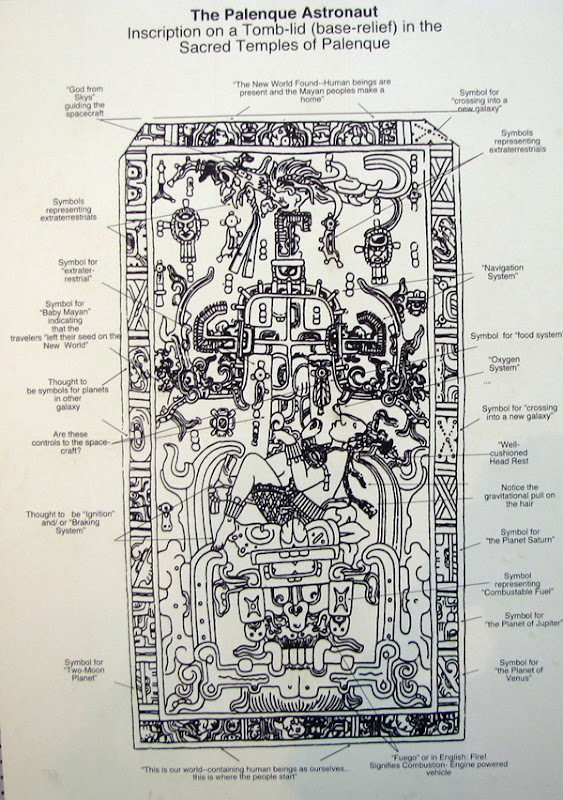 Original piece of metal from the crash site on the right…Alleged. 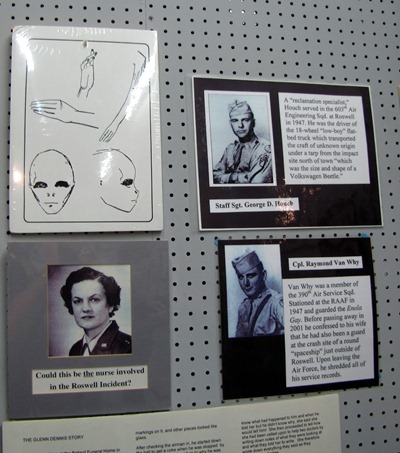 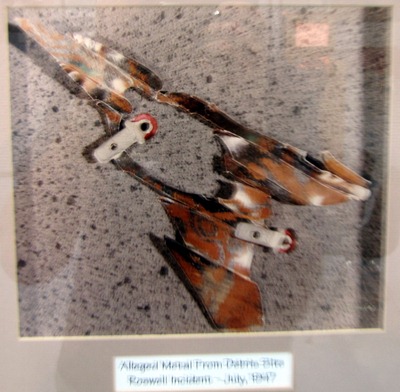 So after buying the usual Tee-Shirt,(with an alien on it of course…That glows in the dark…..really!) I headed back to camp and a nice quiet Halloween night.With no internet.

Too exhausted and stressed out anyway.

Monday morning I packed up to head further south to Brantley Lakes State Park near Carlsbad, where my friends Barb and Jake are parked and saving a spot for me. 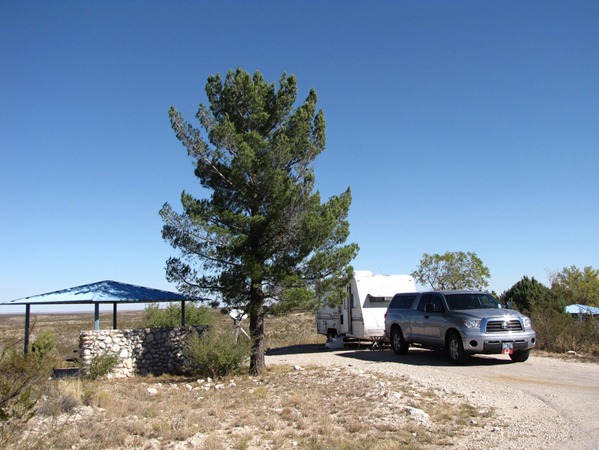 I have a nice spot right across the road from them.I had just finished my set up and was having lunch when there was a crashing thump at my front window,I look up to see a road runner peering in at me,I went out and said to him….Whatcha doing up there?…..He just stared at me then jumped over to my satellite dish,so I went to the truck to get the camera and he disappeared…I have noticed a pattern with roadrunners….They usually show up just after arrival to see if you are an easy mark for some food,and if they don't get any,its usually the last time you see them.

Now its time to call in my markers with Barb and Jake and impose on them for help getting my internet up and running,by borrowing their equipment piece by piece in a trial and error fashion until I find the problem.This is the  system I helped them get set up with last year at this time,and it was finally going to benefit me.

Photo from last year in Yuma. Jake had a nice strong signal and was on line,so since Galaxy kept telling me my signal was too weak,I hooked up my modem to his dish and called Galaxy again…..This time the guy says you cant do that…..What!… BS I cant, its just an antenna…After conferring with his higher ups he must of got the message.But to no avail even with a stronger signal and a cros-pol pass,I still couldn't get on line……..So we tried re-commissioning my regular modem that I’ve been using for the past year and guess what……It did work again…..So I don't know what happened, but for now I don't care as long as I'm back on line……Boy!…..My mailbox was full of e-mails asking what happened?…Are you Ok?.. Sheeesh! I was missed…..Cant let that go to my head. 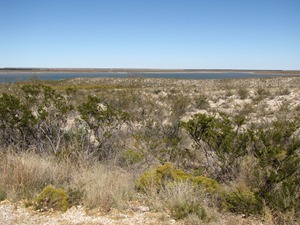 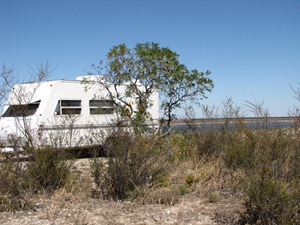 Just a final thought on this internet thing after sitting and thinking about it.If I hadn't switched modems to see if it would solve the problem originally,it probably would have been solved in the first hour of the 5+ hours spent on the phone,because it looks like that backup modem still has a Hughes lock on it,which is what they do when you cancel a subscription,which I did last year when I switched to the Canadian supplier for Hughes.

The real test will be when I move to my next location and enter the new location co-ordinance into the modem to reconnect.I love this system….I use it when I’m home…Its quick and easy to set up….Normally…..And I can be in the middle of nowhere and still be connected. One thing that puzzles me is that Jakes dish is exactly the same as mine, but he gets a signal strength 15 higher than me and if we trade radio arms,it doesn't change anything,I’m still lower using his transmitter.Its a fibreglass dish and isn't warped…..Anyway,Jake talked to the ranger here and he said that others have had satellite problems at Bottomless Lakes State park…….so something weird is going on…..A Roswell thing I guess.

Yesterday was warm and breezy here at Brantley Lakes State Park,and was my first day in shorts,so I spent it washing the truck and trailer of all the red dust and mud from the Monument Valley.I will stay here another day or so just relaxing or maybe drive over to the Carlsbad Caverns,just a few miles away…I really have no agenda,and as long as the weather stays nice I don't need to go further south or to lower altitudes yet.

Big Bend National Park Texas, is only a days drive away,with 2 more State Parks on the way if I wish to shorten my days travel.My friends here are heading back toward Arizona today,but I will stay the course and still head south east, as I treat every winter travel season like its my last and try and see and experience something new.

Posted by Wandering Willy at 3:16 AM