My Roswell Incident…5 Days Of Frustration.

Because my blogs tend to be sort of a continuing self narrating story,I’ll start by going back and picking up where my last blog entry ended.

The drive to Albuquerque on Friday last was just another enjoyable days drive with changing landscapes,from rolling grasslands to pine forests each time I climbed to higher altitudes.Sometimes I thought I was in southern Alberta/Sask.,then other times, the BC interior above Merritt.Then dropping down into Window Rock the capital of the Navajo Nation,then quickly passing into New Mexico and down to Gallop and the Interstate east to Albuquerque.

The next morning I left around 8:30 AM hoping the morning rush was over in Albuquerque and as I headed down into the city, I found it to be one of the easiest larger cities,to navigate on the Interstate….Wow! I thought,things are going well.A pretty city,with the mountain backdrop,just like Salt Lake City from a distance,a little Bee Gee’s pumping out from the oldies station,life is good.

East of the city got pretty boring with flat grassland and some distant mountains.I crossed the Great Divide at this point and it really was a non event.If it hadn’t been for the sign,I’d never have known.Then at a little place called Clines Corners,I headed south on highway 285 through some of the most desolate country I have ever seen.4 lanes divided and practically no traffic,so that was good but it sure can lull you to sleep.This was the area of the 1947 UFO crash,just west of here.(No I didn't say alleged.)

Then as I approached Roswell it got a little greener and milder.Finally I was into some warm temperatures for the first time in over a week….As I entered Roswell I kept thinking it was sort of like Yuma but a bit smaller.I didn't know whether to go to the State Park or just grab an RV Park.I passed 2 RV parks that didn't look all that great,but decided even if it is the start of a weekend,I’ll try to get into the Bottomless Lakes State Park about 20 minutes east of the city. 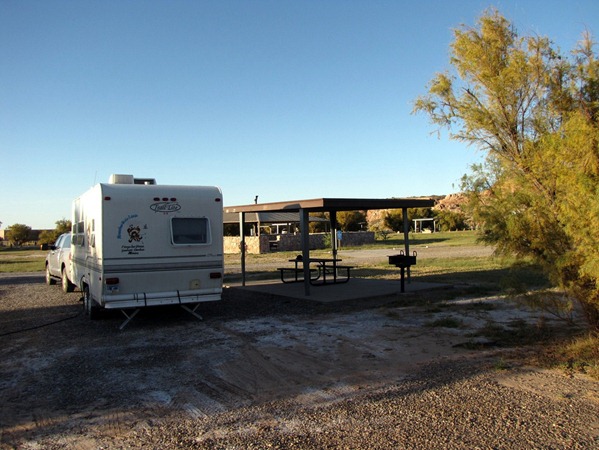 Actually I found a nice spot near one of the lakes,and not crowded,not even 1/3 full.$14 with 30 amp electric and water plus a dump station…..And lots of flying insects,mossy's,house flies,and mud daubers.Every time I went inside I’d take a collection in with me,it was hot and sticky with no breeze.

Another view from the hill above.I’m in the middle of the back row. 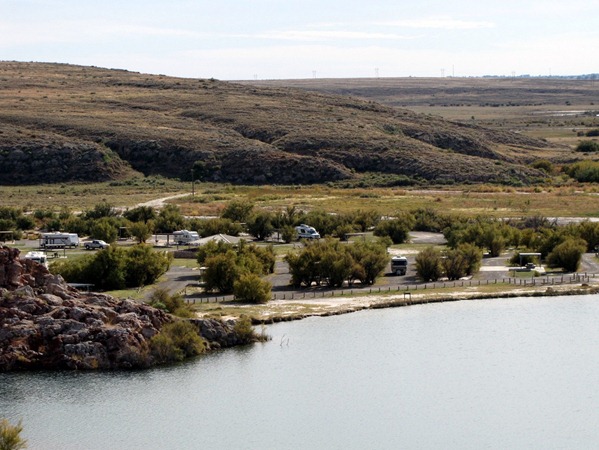 Like on every stop after setting up the trailer,I set up my satellite dish that gives me my internet and Shaw Direct TV,all in one package,and as usual the TV was there loud and clear but no internet…..I just couldn't get on-line…..Is it the Aliens?….I don't give up easily and fought it and the flies until way after dark before finally giving up in exhaustion.Time to put my little US Cell phone (Tracfone) to work in the morning,to get some help,I had over 126 minutes of paid time to play with.

A wider view,but taken directly into the sun also. 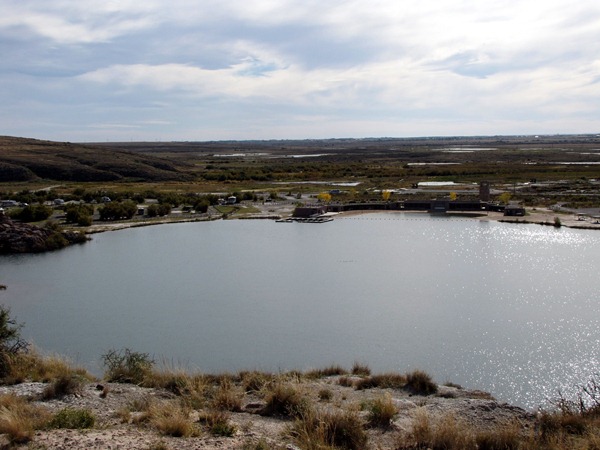 Next morning on the phone to Galaxy Broadband in Toronto….100 minutes used and and still no success.I carry a spare modem,we commissioned it and that didn't solve the problem.They kept telling me that my signal strength was too weak and I told them its the same as it always is.Finally running out of time on the phone we ended it for the day.Now,I needed to get another phone card,so off to the Wal-Mart in Roswell,where to my disappointment, found that the State of New Mexico is going with only one cell carrier and they had fazed out the cards for the Tracfone.

Great! Now what?They suggested trying some other places for old stock.By now I was really stressed out in a strange city and the temperature just topped 90 degrees and I hadn’t eaten all day.But alas!To make a long story short,good old “Target” had remaining stock near their cash registers,I almost kissed the girl.2 hour cards,and I get double with my phone,so that should be enough for the next days attempt.

Earlier in the day I had even driven over 100 miles round trip to my Nanaimo friend's campsite to the south near Carlsbad,just to borrow Jake’s radio arm off his dish to try.So you can see it was a long hot day of frustration……I hate it when I leave my comfort zone…..I’m a creature of habit and when that gets altered I don't function too well.Having that internet all the time anywhere is important to me…..I guess I’m spoiled….I did it to myself.

On the phone to Toronto at first light as soon as they opened Sunday morning.This time I got a level 1 tech who talked like a cross between a drill Sargent and a gangster.Well after 2 hours of trying everything including him being on the phone with Hughes and Hughes trying to communicate with my modem to no avail..(This is a modem that Hughes locked on me for 6 weeks when I ended my subscription with them last year,causing me to have to buy another.)And I think its still locked.But try and contact Hughes to find out……Hah! That's a laugh….So its Sunday,mid morning and time to give up because we have just wasted another 2 hours on the phone ……I still need to do things including going to the UFO Museum in Roswell….Found a dingy Laundromat and got that chore done plus I went back to Target and got another card just in case…..On the way I noticed a “Whattaburger” outlet…….mmmm

Gonna eat today…..I still remember the one in McAllen Texas last January, with the huge burger between 2 pieces of Texas Toast…….But I didn’t see it on the menu here..

So I had a regular……Now its off to the UFO Museum.

Posted by Wandering Willy at 3:48 AM