“My final frontier” day on the road…..Star date 2010…..oops that's Star Trek,even though it might seem that I’m spaced out at times.

Yesterday,after finding that fellow blogger Ivan had sneaked up on me.(sure hope there’s no hit man out looking for me)I seem easy to find.I did all my morning duties in preparation for leaving then gave a rap on Ivan's side wall to wake him and a rap came right back immediately and out he came. 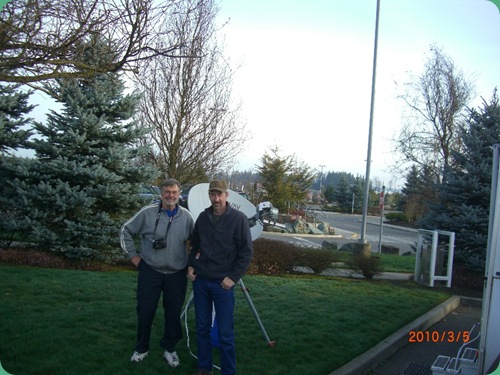 We had a nice first visit for just over an hour,discussing many things in a short time.I must say I was impressed with his I-phone and what it can do.He has ordered a satellite internet system like mine also,so he will be well equipped for “in real time” blogging.

The morning sun was melting the frost off the windshield by 9am,so I headed for the nearby Wal-mart for some final goodies,then on the road for the final 2 hours to home.

The day was warming up nicely as I travelled north.Here is a scene taken in Washington State of the local farmland near Sumas and the mountains of BC in the background…..I can smell home. 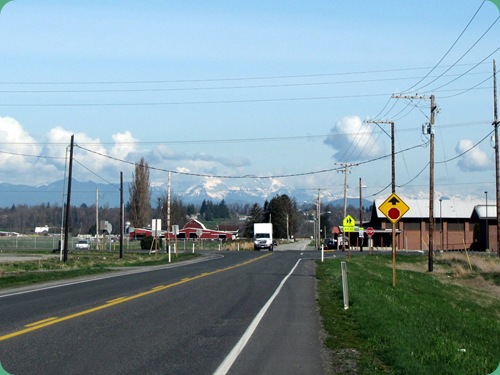 A quick stop to gas up in Sumas and feed some money into my Bank of America account for next time, since the rate is good right now…..NOW THE BORDER……Shades of last year swept over me….keep your cool Willy and play nice……A short wait of 5 minutes and I had my spiel down pat.I told the young lady in the booth that I had $1400. to declare, of which just under $1000. was emergency repairs and I would like a concession for that like their website states.

She asked the nature of the emergency,so I told of my Mexico experience.While doing this along comes another agent who overheard me and started asking questions about Mexico.It seems in a few days he is off on a bus tour of Mexico for a month,taking him through many of the areas that I travelled.He was so excited having this conversation,he was almost jumping up and down.I figured…Hey! I going to get out of here no problem…..not…..The young lady handed me that famous little yellow slip of paper and said to go inside…..I though…here we go again,the big search of both vehicles.

But to my surprise the fellow inside just glanced at my receipts asked a couple of questions then said…….Goodbye..I was out the door like Speedy Gonzales and headed for home.

12 noon and I pass through the gates of Tapadera Estates with a big sigh of relief that I got my little trailer back home safe and sound and didn't have to abandon her on the side of a Mexican highway,which was a thought that was very clear for awhile back in January. 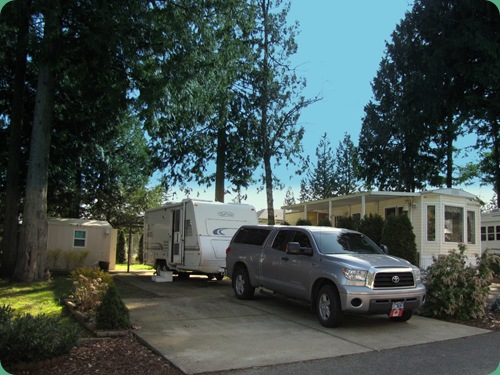 All tucked in next to my Park Model home.The afternoon temperature rose to 55 degrees and the sun felt really hot in the back yard as I set up my satellite dish.I see the lawn is due for a first cutting and flowers are up.Everything is several weeks ahead this year,with the bushes leafing out and many blossoms.In fact I didn't really see any big difference in spring growth all the way from California to home.Or temperature either, as yesterday was warmer than 2 days before in Redding California. 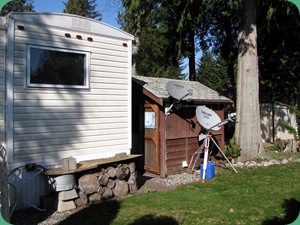 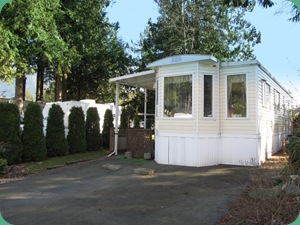 So here I am finally sitting in my easy chair,with a cool one. 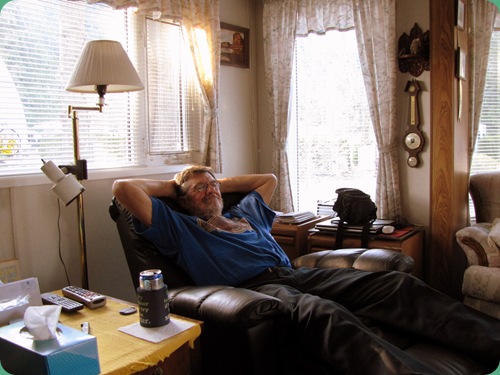 Looking out at the little trailer I called home for 4 months,(except we mustn't forget the week and a half in the NO TELL-MOTEL) and watching the big screen TV and looking at the pile of mail I have to go through. 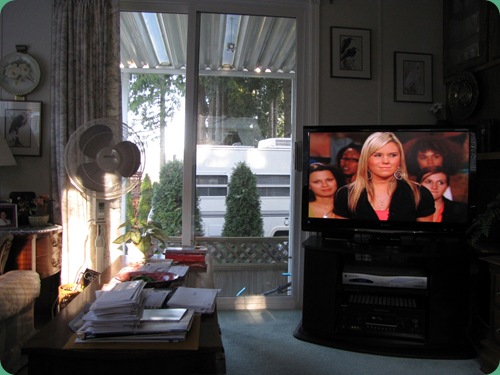 So as I said last time,when Wandering Willy isn’t wandering,he’s not blogging,so this will be the last for awhile.

I've picked up a lot of followers this winter and really appreciate the response’s I received from many people.I guess all the grief I ran into from killer bee attacks to axles breaking,did make good blogging fodder,and as reader Charles stated in an E-mail,trying to second guess what I was going to do next to get myself out of the predicaments was entertainment in itself.  He even suggested taking up a pool to send me to Newfoundland this summer,just so I could blog about it.He said the advertising dollar would be better spent than using TV adds.

I will continue to follow my fellow bloggers through their travels and add the odd comment.More time to read others for a change as there are some great blogs out there.

You will see my blog popping up on their lists when I start again,so keep a watch and thanks again to all.    By the way…I’m really just called Bill….Willy’s just a handle.Only my mother calls me Willy,always has….And my dad always called me Sam………Go figure.

Posted by Wandering Willy at 4:56 AM