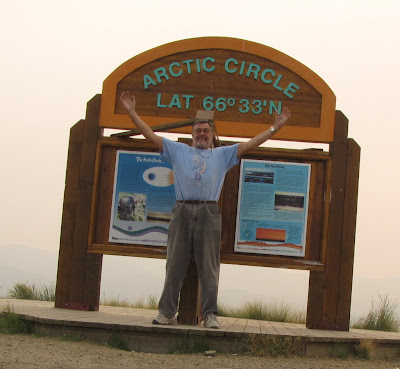 Wednesday morning,Aug.5th,full of anticipation,I got an early start out of Eagle Plains campground,immediately dropping down into a wooded river valley,then back up onto the high tundra again.Climbing to a high point,I could see it ahead....The rest area for the Arctic circle....This was it... What I originally wanted to see and to experience,figuring that going any further,I could take or leave,but the fascination with this highway and what it could show me,was drawing me further and further.
Below is a scene of the sun trying to break through the smoke.It gave an enhanced feel to this lonely place,as I had it to myself and wanted to savor it a bit. (km 405.5) 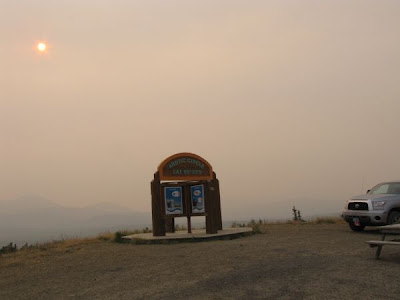 After travelling another 40 k's across the barren but beautiful tundra,I dropped down into the wooded Rock River valley.As you can see,tundra country is dependant on soil condition and altitude,along with shelter from the wind.This pic below was taken in a campground in this valley.I wanted to show that this country changes with every mile...You never know what to expect next. 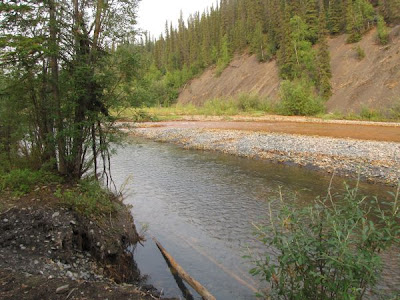 Back up onto the tundra again where I had to stop and take a shot of the grasses along the road way.Such a nice pink color. 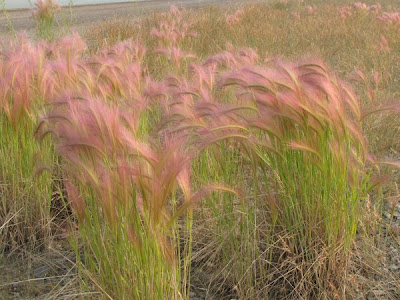 And further along,I saw many of these flowers starting to appear.I got out of the truck and ventured onto the marshy ground for a closer look and each step I took found me sinking down about a foot and getting wet feet.
They seem to look like cotton balls from a distance.(identification please,Kathy,you got the book)
In the top far left of this photo is the summit of Wright pass and the continental divide. 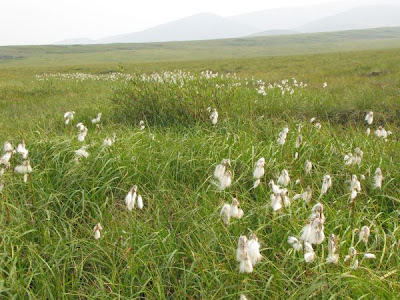 And here it is...As its also the boundary between the Yukon and the Northwest Territories.(km 465)
From here we will start a slow descent toward the Mackenzie delta. 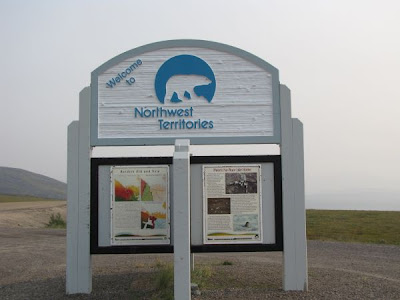 But first,only a few k's down the road I came across a herd of caribou,about 75 to 100. They were just about 200 yards off the highway.They seemed uneasy and were constantly moving.Probably because of me and another vehicle just up the road from me who also stopped to watch.I spent most of my short time before they moved off,taking video,but got a few zoomed shots like below.
According to the "Dempster travelogue,"my on-line guide, I was fortunate to see any caribou this time of the year as they are usually up near the Beaufort Sea,which is this herds summer range.
There are 2 herds,the other down south near my first nights stop. 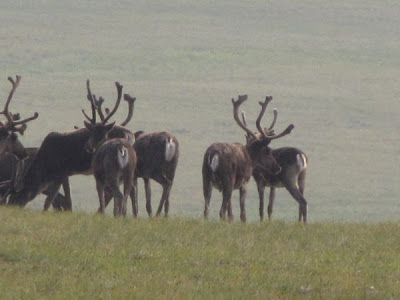 Moving on down toward the Mackenzie delta about half an hour later,I stopped at the entrance to one of the highway maintenance gravel pits for a pee break and noticed one of my trailer tires getting low,so had to crawl into the back of the truck and dig out, from off course the very front,my little compressor that I wisely bought at "Crappy Tire,"before leaving home.Firing up the Honda 2000 to power it........Its sure nice to have lots of toys.
Now all the trucks started to arrive..just my luck and I'm blocking the entrance......Jeeeze! I thought I was in the middle of nowhere.Same thing on the Cassiar,when I stopped across some small ,seemingly, unused little side road and all of a sudden I hear a roar of a vehicle coming up this road.I hadn't seen any sign of life for miles before this.Anyway I'm going off on a tangent again.
We are now off the tundra and down into the broad Mackenzie lowlands and we come to our first of 2 river crossings by free ferry.(km 334)Below is the little one across the Peel river.They have equipment constantly working the dirt approaches as the ferry ramp just digs into the dirt.With my low slung trailer,I was worried about bottoming out but the crew members are great at guiding you to the exact spot. 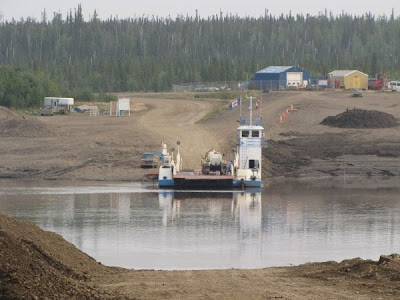 8 miles later we pass the first town, Fort McPherson,just off the highway.I didnt go in for a look.Its a bit smaller than Inuvik.
Now after another half hour (km377)we descend the hill and get our first look at the Mighty Mackenzie,I believe I read that its the longest in Canada.It is huge here and still quite a distance from the Beaufort sea.
Below was a beautiful sight as I descended,to see the village of Tsiigehtchic pronounced (zee-ta-chic)you say it fast....It took several efforts,with instruction from the native crewman to get it down.
Just below the ridge where the village sits,is the Arctic Red River...A Canadian Heritage river.It is here that it flows into the Mackenzie,isolating the village,so the ferry has to leave the ramp at the bottom of this road and go across the mouth of the Arctic red to the village,then it crosses the wide Mackenzie. 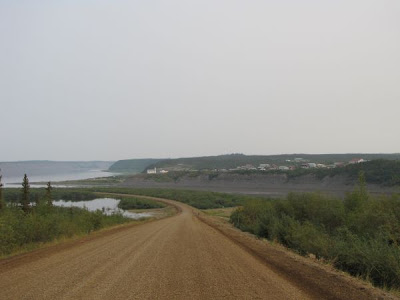 Here we are on the ferry,a little larger than the Peel ferry.If you look up under the bridge,in the trusses,there are about 20 cliff swallow nests,and are most are active as the parents were feeding there young. 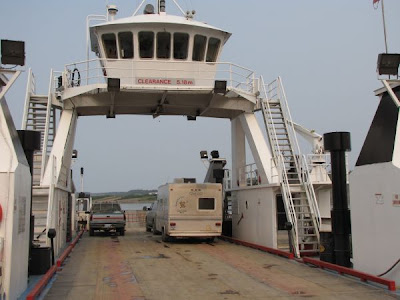 Below is one of the little guys......saying jeese!born on a moving ferry...What will they think of next.
The next installment of this little saga will take me the final 126 km's into the town of Inuvik,the end of the road and my tour of the town that had full daylight for 24 hours.I missed the 24 hour sun by just a few days.Hard to get used to for a first timer.
UPDATE...I'm presently in Dawson City and I think I have solved my fridge problem.I spent yesterday cleaning thick layers of dust out of the back of the truck and all the equipment in there,after hosing down the outside of the trailer and truck.I stopped at the first car wash I came to after exiting the Dempster...And I didn't have to go very far to find one.......That says it all. 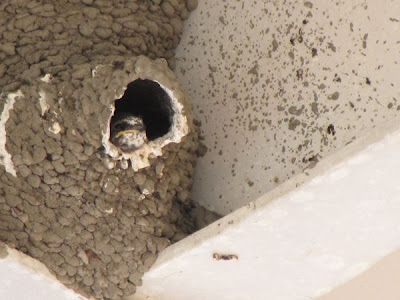 One last look at the Mighty Mackenzie taken from the ferry. 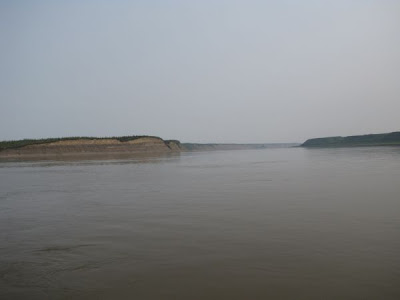 Posted by Wandering Willy at 3:47 AM