Back In The USA,3 Months To The Day. 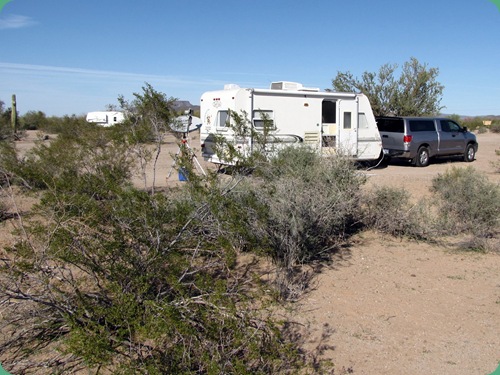 I did what I said I wouldn't do,and that was to rush back in a day and a half from Celestino,over 800 miles,but I cant help myself.Once I get on the road,my knuckles tighten on the wheel and my eyes bug out and I say to myself…..self..lets get outa town.

My friends at Celestino were a few hours behind me leaving and will end up a full day behind me when they arrive in Arizona.

I made it to the Pemex 30 miles north of the Guaymas /San Carlos turnoff before nightfall.I think its about the 8th time I’ve stayed in this rather dirty dusty truck stop.It always seems to be convenient,time wise, going both ways.

I was up well before dawn,cant sleep well anyway in those places,breakfast and dishes done and on the road in the early darkness,just me and a 1000 trucks.I’m starting to like going through the city of Hermosillo in the pre-dawn darkness, as its so quick and easy with no traffic to deal with.It was starting to get light just as I left the north end.

It was good to see the Hermosillo to Santa Ana stretch of highway had been repaved since my last time going north on this stretch 2 years ago,when it was pothole hell and I had thoughts of never returning to Mexico ever again because of it.

Next,I wondered what the new Army checkpoint just before Benjamin Hill,was going to be like.Well,it was more involved than I thought.The first kiosk fellow went through my paperwork thoroughly.He was from Chiapas and since I was there just a few weeks ago,we had a bit of a bond for this homesick soldier,not that it does any good as he now sends me to the 2nd kiosk where the next guy wants a tour of the trailer.He goes through everything,even opened up my can of cashews.Left my dirty underwear alone….I wonder why? Should have put the cashews with the underwear.

It took about 15 minutes but seemed a lifetime and he was satisfied.Funny thing,he never once looked in the back of the truck under the cap where I have plenty of stuff stored,but he will open a can of cashews.I think they just like to look inside these RV’s to see what they are like.

Half an hour later I passed the Pemex that ripped me off on my first day last November,still quiet,no customers,attendants just sitting around just like that day I turned in and became their mark.I wonder if they have a reputation to be so quiet.My complaints to Pemex and Safeco via E-mail were never responded to,but they may have done a check on them,I don't know.I was hoping to see the place covered in yellow tape when I went by but I guess that's just a dreamers dream.

At Santa Ana I turned west onto highway 2 for Sonotya.The new quota westbound was built to the same specs as the Arco Norte around Mexico city,a nice new wide concrete highway that ends at Altar 75 k’s away,then continues as a nice 4 lane until Caborca,another 33k’s.Then the rest of the way to the border is a beautiful new 2 lane highway with wide shoulders.This route is becoming very popular with travelers who are westbound,instead of Nogales.

Tuning in my paperwork at Km21 San Emetario is usually quiet but still a little slow,just like getting it done is usually slow here also.Next a final refueling stop at Sonoyta the border town of 12000,then its just up the hill and into the US customs line.Only 2 ahead of me,then my turn as I’m greeted by a nice young lady who takes my passport and asked if I have anything to declare.I told her I had some fruit,bananas,papaya,and 3 oranges….She says no oranges allowed,just dump them over there as you leave,pointing ahead,and have a nice day.I stupidly said…That’s it?….Yes that's it, she says and I’m outa there and across the street to the general store for more oranges…..Gotta have my orange or grapefruit in the morning.

Another half hour has me back where I started 3 months ago,selecting a convenient spot to boondock away from others a fair distance like all good boondockers should do.Its of course a little more busy now compared to last November when I had the place practically to myself.Here I will rest a few days before taking the next leg of my journey back to Yuma.I seemed to have developed another small problem,this time with the fridge not being as cold as it should be for the past few days…..I guess its always something with an 11 year old trailer,but nevertheless,I was a happy puppy when I dragged her back across the border,because for awhile there back in Chiapas,I had thoughts that I may have to abandon her.

So ends a very interesting Mexico trip,unlike any other Mexico trip in the past,full of happy times and sad frustrating times,meeting many new friends who I hope to see again.

I think back to all the trials and tribulations like being attacked by sugar ants,killer bees and having a possum take up residence under my hood,and I didn’t even show you the the flying ant crises in Chiapas as bigger problems had already raised their ugly heads with the broken axles…..Will I go back to Mexico again?……………DAMN RIGHT! Already planning.

Posted by Wandering Willy at 4:06 AM