Saturday morning in the Yuma area dawned with clouds and bluster…And I said to myself…self,its time to start heading for home,for I have finally contacted that great disease,called…GOING-HOME-ITIS,when the old mind set finally realizes that the party is over…..If you could call it that.

But I had one other task to perform,and that’s to stop and meet some favorite folks that I have been in contact with for over a year now,but have never met personally.This was my best chance to do this as they were boondocking at Borrego Springs and that's just 20 minutes off my route along the Salton Sea.

THE BAYFIELD BUNCH….See their blog on my side bar,its been there since day one as Al has been a big help this past year helping me,especially through those first few weeks of setting up my own blog. 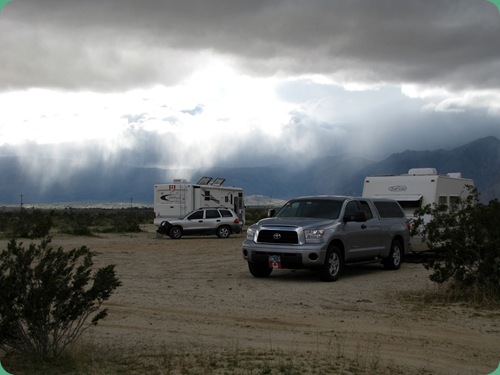 They knew I was coming but they thought Sunday,and no I didn't attack at dawn like I threatened.I performed a daylight raid at noon,catching them off guard,parking a distance away and wandering close to their rig like I was looking for a place to park close by,knowing that Mr.Crankypants,as he likes to call himself,would not like the intrusion.

As I got closer to their open door there was an explosion of dogs heading my way….The jig was up as Checkers was the first to reach me before Kelly could get out the door.But I met Checkers like a long lost friend and we bonded immediately.Dogs know when people like them. 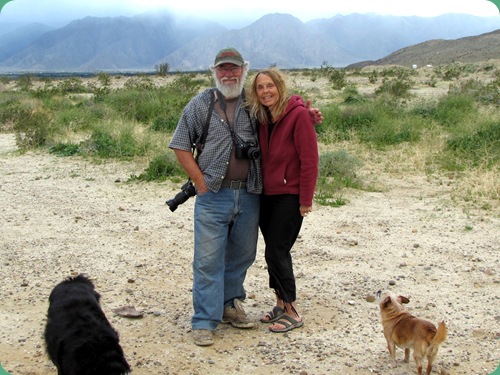 we spent the next 45 minutes just getting to know each other,then they invited me to park next to them, so I set up across the way by the old radio tower. 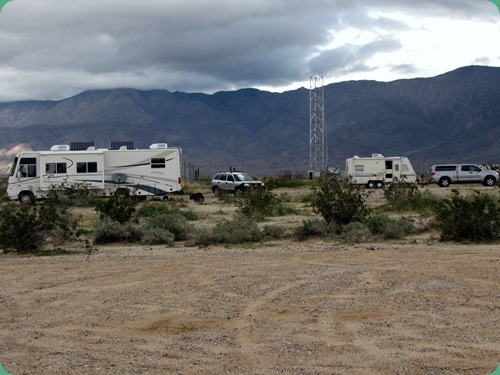 Later we stood out talking and watching the storm clouds forming over the mountains behind Borrego Springs,trying to get a few photos of the clouds and sheets of rain glinting in the sun as they cascaded down on the hills. 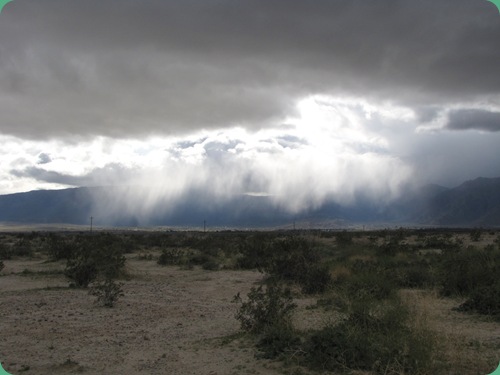 The weather finally drove us in for the afternoon as the rain finally hit us in a downpour that lasted for a few hours.It was a good excuse to watch the Gold Medal Curling final at the Olympics.

As I write this at 3:30 am….Yes up early as usual….I was looking at the inside of my eyelids by 7 pm so have had my nights sleep.The rain is gone the moon is bright and the darn wind is still  rocking the trailer.And its damn cold.

So we get another chance to visit today with a time out for the Gold Medal Hockey Game,then tomorrow,Monday,the final 4 1/2 day push for home.

Posted by Wandering Willy at 3:52 AM