Yesterday was one of those grueling,driving days,almost 500 miles and 12 hours behind the wheel,with a few naps thrown in,but closer to home and in more familiar territory.Out of the high altitudes and on the beach again.I only stopped twice to take pictures and at the same time check on the new suspension modification and the heating problem I had with the brakes since Oaxaca. 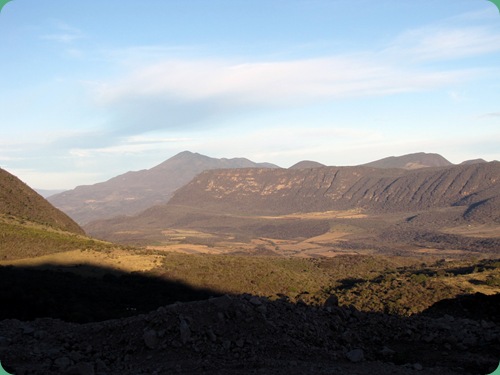 Its a couple of thousand feet that you drop down soon after leaving the high valley around Mazamitla and Hacienda Contreras RV Park.Above is a stop I made just as the sun was rising against the western hills above Lake Chapala.You can see Mexico’s largest lake below. 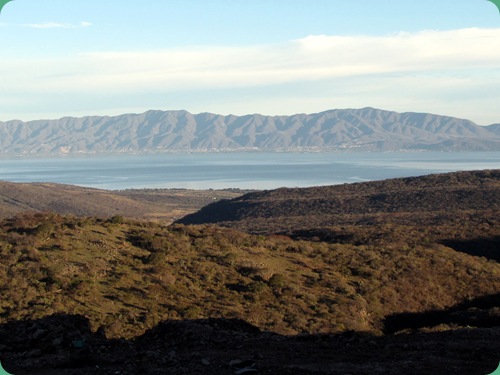 I want to go back and carry on with my little axle saga since my last post a few days ago when I was about to do the road test,then maybe we can put all this finally to rest.

Jon,(I think that's the Dutch spelling)another camper,and I went out on the test first thing,he had a cell phone so we could call back to Sal if necessary,but all seemed ok and really felt good,some brake warmth on one only.We took a bit of a pot-holey road,(not hard to find)and no buckling of the spacer channel,which was bothering me as the actual thickness grade of the material was not in the plan I had,only a photo that I showed on this blog earlier.

Now back at camp and figuring,finally my troubles are over and I can get back to a normal routine.I decided that a day of rest was in order before hitting the road the next day.But first I wanted to crawl under(I can do that now)and secure some of the brake wiring that was hanging down…….Then I saw It……..Oh No!..At first I thought a bolt had sheared off at the head.This was one of the main ones that bolt the modification to the trailer frame.

A closer inspection found that somehow in all my assembling,I had missed putting the bolt through all three layers of plate and the head was buried behind one piece instead of passing through it……Well this meant disassembling the whole thing,at least on one side,if I could drop the axle a bit without disturbing the other side.Well 5 hours later and staggering around in the heat of the day,I had it done….So much for my day of rest. Jon’s wife came around with a big pot of home made soup which hit the spot, as I was too tired to fix anything myself and had already missed lunch,losing all track of time.

A fairly decent nights sleep and the crack of dawn had me out the gate and on the road yesterday with a long haul ahead of me.I managed to hit the first tope unknowingly,what a great start to my journey,oh well a test I guess,then an hour later I almost hit another at a good rate of speed,but a lot of blue smoke from a locked up brake saved that one…..Soon onto the Quota highways and away from tope-ville for the rest of the trip.

Looking down at the town of Tuxcueca on the shore of Lake Chapala.Imagine living here with 12 months of springtime climate. 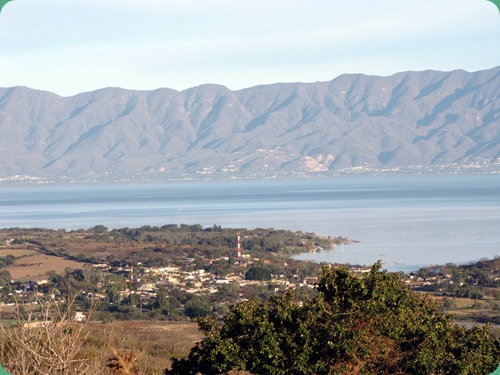 And the road going down.Mexico really puts lots of warning signage into their dangerous curves. 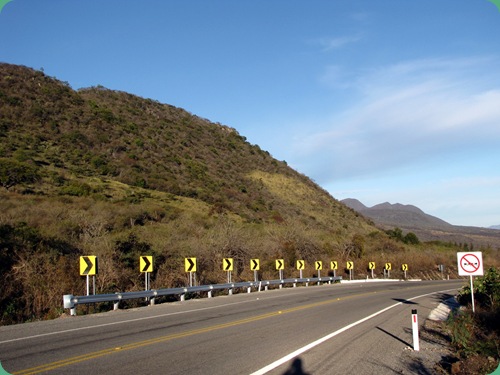 The 12 hour trip was uneventful and a nice warm, mostly sunny day,getting up to 84 before dropping again as I headed north.It seemed that a toll booth was almost every half hour or less,so you just shell out the money until its all gone.At least its a fast,Tope free road.On the back(free) roads it would probably take 3 days to make the same trip.(When I get back to the US,I’ll have paid a total of more than $700.in tolls this winter.)Thank goodness the gas is cheaper here.

Coming through the east side of Mazatlan I realized just how scruffy some of these west coast cities are after the clean progressive cities and towns of the interior of the country.And dusty streets,…..I had forgotten about that this past 2 months.

I arrived at Punta San Miguel RV,an hour north of Mazatlan, just as it was getting dark.I did gain an extra hour with the time zone change.I chose this park instead of Celestino RV,next door because friends are here,and besides I had already spent a week last November at Celestino RV,so a change of scene was in order.Now maybe my problems are over and I can enjoy a few days rest before hitting the road toward the US border,800 miles away.

The first thing is, I need some groceries.My fridge is almost bare,except for a few stray Corona’s.

MY NEW LOCATION ON GOOGLE MAP

Posted by Wandering Willy at 3:30 AM