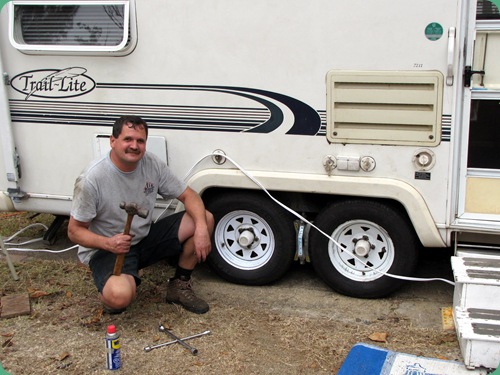 Calvin says,”we need a bigger hammer.”   Back on all fours again and it feels good.

It took about 4 hours to swap out the axles,most of the time was spent jacking and blocking from several different positions so that we had room to work.Everything was a perfect fit.

I spent a bit of time in the morning prior to Calvin’s arrival from another project,to repair temporarily the badly damaged wheel well.So all was done by mid afternoon and the first Corona was cracked in celebration.

One little surprise….When we dropped the rear axle and had a look at it,we found it also was badly cracked and ready to give out.I’m sure glad I didn’t know that when I was limping up that windy mountain road to get here a couple of weeks back.I’m also glad that I ordered two axles,or I think yesterday I would have committed Hara kiri after finding that.

So now time is running out for me.I’ve just 4 weeks to get home and 4000 miles to travel which means if I travel every 2nd day,it will use up all the time.Usually I like to travel 2 days and rest one.I also would like to take a weeks rest at the half way point which would be about Yuma.With the fact that the past couple of weeks has taken its toll on the stress levels and the pocketbook,I think its time to go home.Actually 2 weeks ago when all this trouble began,I was into my 1st day of the return trip,because Puerto Arista was my furthest point out,and only a couple of hours from Guatemala.And right now I’m only a days drive from that turn around point.

I have also decided to scrap my original plan of taking a different and new route back to the U.S. and go with what’s familiar to me,which means going back the way I came,the west coast route.This also means stops at all the places that I have already visited,which also means not too much new to blog about for this trip.

Due to the fact that I have had some really scary close calls driving over these past couple of weeks,especially in Texas where I found the RGV around McAllen very confusing with the expressway dividing a bunch of one way roads,where one time I found myself going the wrong way and facing down 3 lanes of on coming traffic.I also found myself having to use my GPS just to go shopping then returning to the motel because I would get lost every time in the confusing maze of oddly angled streets.

So I'm not going to press my luck,and being the natural worrier that I am,wondering what other break downs are in store for me. All in all I would, after 3 months in Mexico,at this time,like to be a little closer to home to be in my comfort zone.

So my blog posts probably wont be every day from here on in unless there is something of interest.Possibly short picture less updates or something like that.

just to answer the question in the comments section of the last post,trying to get those axles back into Canada without paying duty,is something that I wont attempt after last years little seizure with the tires that I thought looked old enough after 4 months of desert travel.How do these customs people figure these things out?…..THEY HAVE WAYS.

Welcome to the new readers that have joined in this past couple of weeks,you guys sneak up on me sometimes and I don't notice the new additions.Some very nice blogs too.

Thanks also for all the nice comments and encouragement through these past 2 weeks.And to Calvin in the picture above,I’m sure glad you live in this park and are a great mechanic,because without you,(a Canadian Expat)I would have had some real big problems getting this job done on the trailer by myself.

Posted by Wandering Willy at 2:33 AM