Now caves really aren't my thing,although you might say I live in a mobile “MAN CAVE”but that's a whole nuther thing,so on Thursday after seeing my friends off, departing on there trip back towards Arizona,I decided to take a little jaunt some 50 miles to the south to visit the famous “Carlsbad Caverns.” Barb and Jake had given me a briefing on what to expect and what choices I had on how to spend the time there……So plain,simple and easy was my plan.

First off the drive up to the visitor area and the caves from the main highway, is a gentle winding drive up about a thousand feet along a shallow canyon. 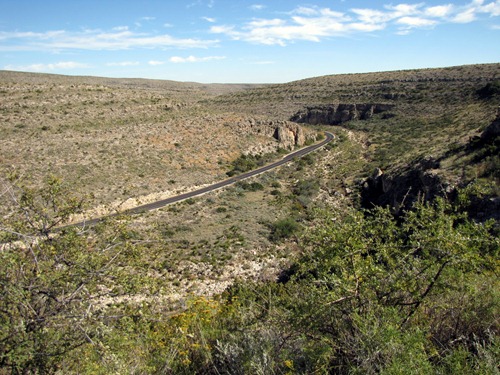 Photo above taken from switchback on this section of the road.Then after a few miles I topped out on a high plateau looking back down to the flat plain 1000ft. below. 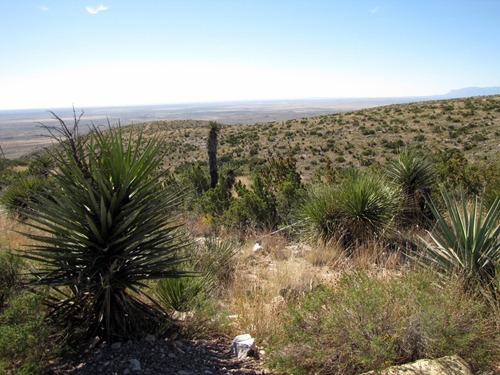 And a large parking area with an equally large visitor centre. 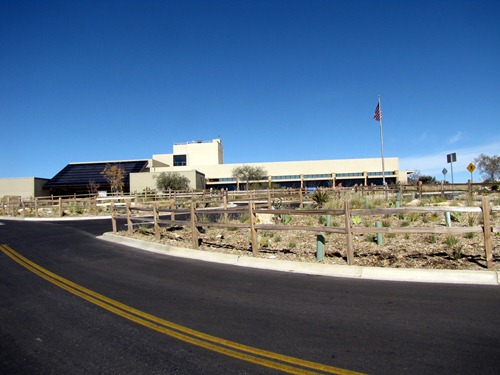 I decided to do the Big Room self-guided tour,which suited me fine,so after buying my entry ticket,I was given a short briefing and escorted to an elevator.

This elevator ride is an ear popping 75 story, 754ft. drop down into the depths,that takes less than a minute. Then I entered a visitor area with washrooms,souvenir's and food sales.All in a cave like atmosphere. 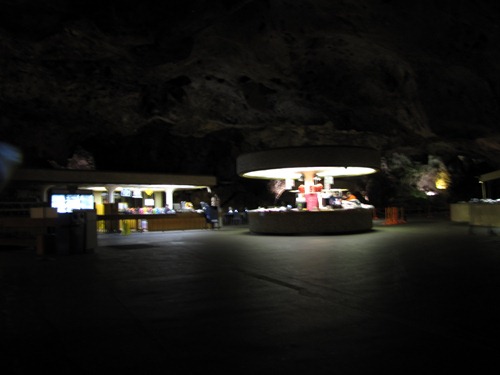 And get this!…..Dig the spotless washrooms built right into the cave. 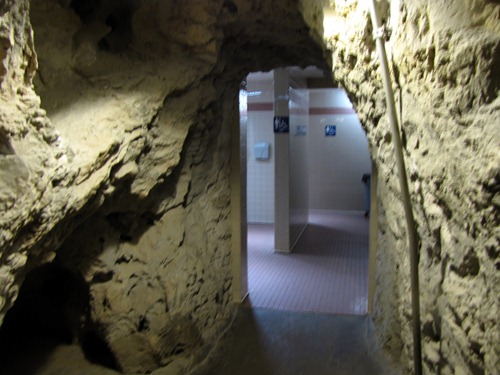 So the Big Room self guided tour is one mile all the way around and takes about an hour and a half.There are over 30 miles of passages in the Carlsbad Caverns, but the public can only see a bit of it.

The darkness and dampness took a little getting used to as I found the breathing a little heavy.Here is a map of the Big Room with the lines showing the path all the way around….Its one BIG cavern alright! 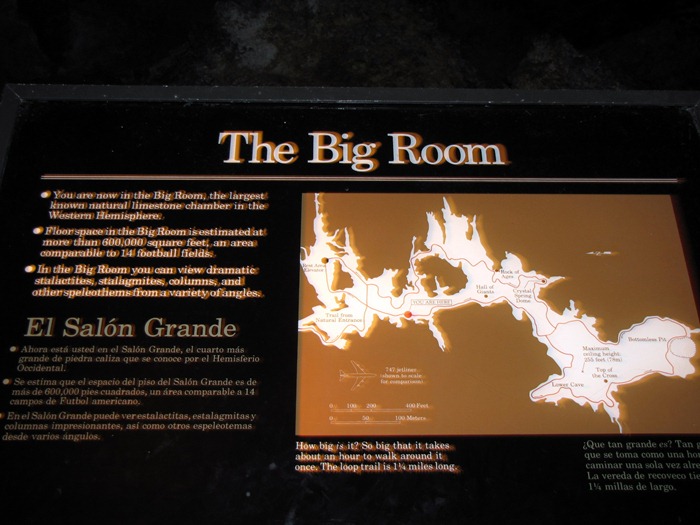 The pathway was great but the darkness and my inner ear problem found me staggering a bit and conjuring up Canyon De Shelly, take a tumble thoughts. 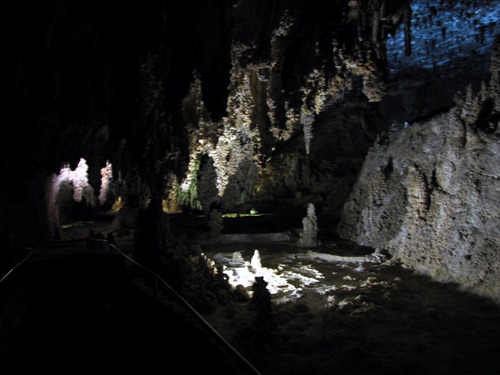 Many of these photos taken with the flash make it look brighter than it really was.

You would occasionally meet someone but for the most part you had the feeling of being alone in the darkness,hearing the occasional distant whisper or seeing a camera flash. At one point I saw what looked like a figure sitting quietly in the darkness and as I passed him, spoke, but he didn't answer.Then later I could hear voices coming up behind me and it was him talking to himself and laughing at his own jokes….Sort of a weird hippy type that has probably been smoking good weed for a long time.He moved on ahead of me talking away to himself and laughing. 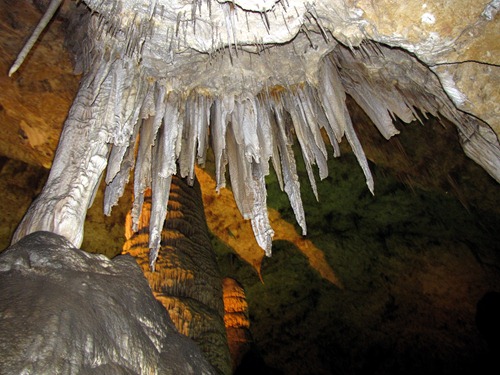 Later I came across him sitting in the darkness humming like a Buddhist monk….And I thought I was weird. 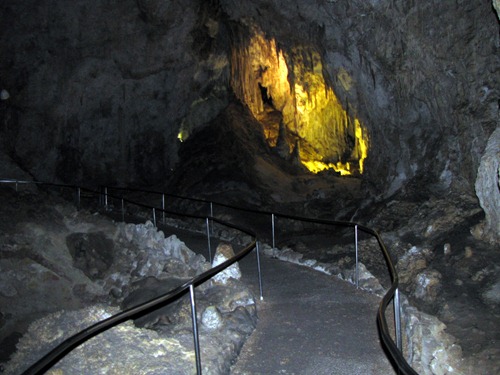 I got a few drips hitting me on the head but considering the amount of moisture,it wasn’t bad. 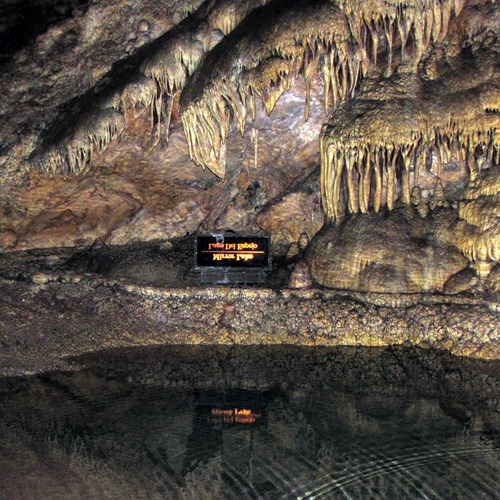 Even the Red Rag got the tour with me as it was perfect for the almost constant mid 50’s temperature down there. 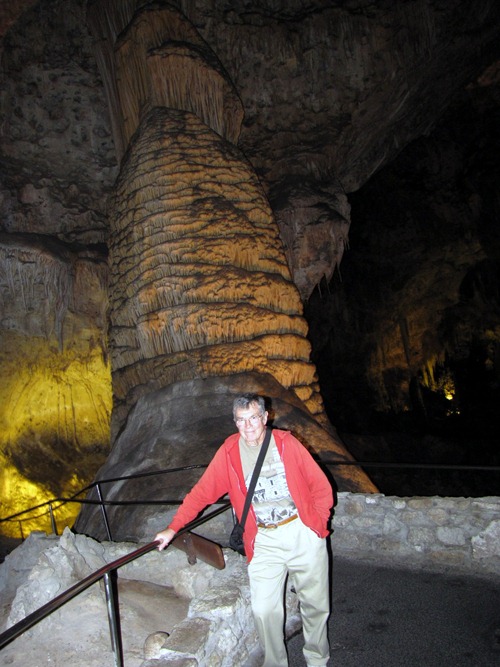 The fellow who graciously accepted my request to take a photo of me,had a hard time finding me in the dark as his first try missed me altogether…..No,it wasn't the weird hippy. 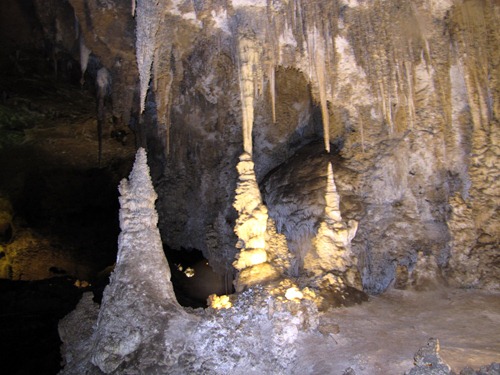 So after an hour and a half,I was finally back at the starting point.I bought the Tee Shirt and headed for the elevator.

And speaking of the weird hippy….We had the pleasure of his company on the elevator ride back up.And in less than a minute during the ride,He told us all how he saved several peoples lives in Hawaii and saved others lives in other parts of the world.Had many heart bypasses and back fusions and still went out and saved most of the world……..What a guy!

Then as I was taking a final photo in the parking lot,there he is again,he stops his car and says (take my picture,I’m famous you know),I just laughed and said lying,that I took one of him in the cave…….Then after he drove away I was kicking myself for not obliging him……It would have been a perfect ending for this blog entry, to be able to show him………..Who knows……Maybe he is famous.

Posted by Wandering Willy at 4:10 AM