On The Move…..Just An Update.

After 2 days of quiet,relaxing travel,I’m in the border city of Laredo Texas,at a nice State Park called “Lake Casa Blanca,”and as I write this at almost 3 in the morning,I’m awake because some clown came roaring through here a little while ago and woke me up.

I’m in a nice little semi-circle pull-through down by the lake. 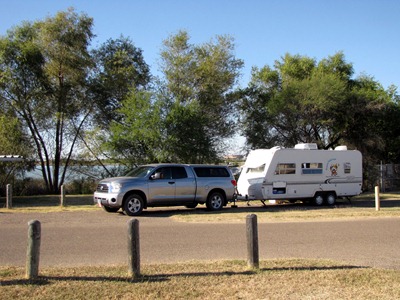 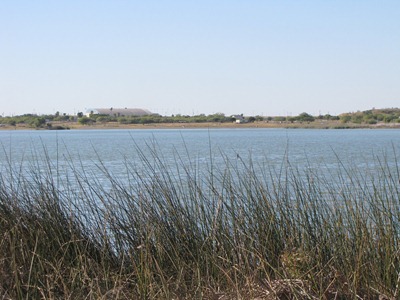 The park is quite large and situated on the bypass ring road around the eastern side of the city,across from the airport,and at 2:30 a.m. a big jet took off breaking the nightly silence, and the sound of sirens seems to be regular through the night.So even as its a country setting,it is close to a city of almost 200 thousand with another city,Nuevo Laredo Mexico,even larger I believe, joining it at the border.

As I entered the city yesterday afternoon,I was amazed by the amount of trucks on the roadways here.I don't think I’ve ever seen such a concentration of big rigs in one area.I figure it is because of the cross border trade here,with so many big factories on the other side in this general area of Mexico.

And all along the highway this day all the way from Del Rio were hundreds of transmitter towers.I counted 6 in my line of sight at one point.Another unexplained thing that I would like to know the answer to.This is flat land…No mountains.Why so many? 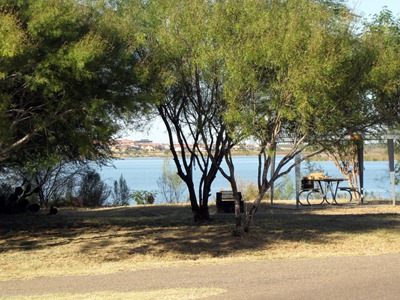 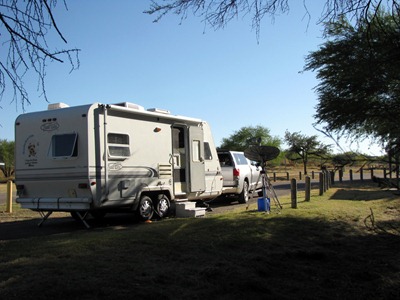 As you can see my selection of photos is limited and I do like to record what a camping area looks like at each stop,which in the long term creates a lot of boring photos of my truck and trailer.But this is not the point,they are just fillers.

Going back to Monday morning,I got a 9 a.m. start out of Big Bend one hour behind that big tandem rig I showed in the the last blog entry,but caught up to them after about half an hour,as an accident shut the highway down on a bridge over a dry wash…no pics but a pickup truck somehow jumped up onto the 2 foot high cement wall and wiped out about 50 ft of pipe railing,so there was a long wait until a wrecker came all the way from Marathon about 70 miles to the north…My wait was only about 10 minutes,just about enough time to listen to the life story of the guy in the truck stopped ahead of me,and tell him mine….So much for the early start for my cross the road camping neighbours.

I must say that so far in Texas,I have experienced nice quiet 2 lane roads,(until just before Laredo) its really relaxing to bumble along without traffic chaos.Just set the cruise and enjoy the changing scenery.I remember travelling highway 90 about 10 years ago with the wife,and the memory of a quiet relaxing drive on this highway was etched in the old memory banks.

Around the small burg of Sanderson a couple of hours into the days travel,the mountains disappeared and the flat desert landscape was the norm,doted with shallow canyons.

Below is an example of the many picnic rest stops that dot the highway system here in Texas.This (below) is one of the smaller ones.Just a wide pull off along the highway with one or more table set-ups. 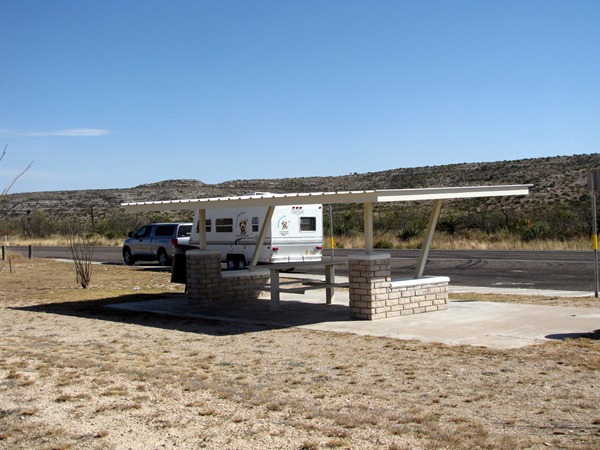 My 1st overnight stop was a familiar one as we had stayed here 10 years ago after coming out of central Mexico….Its called Seminole Canyon State and Historic Park. 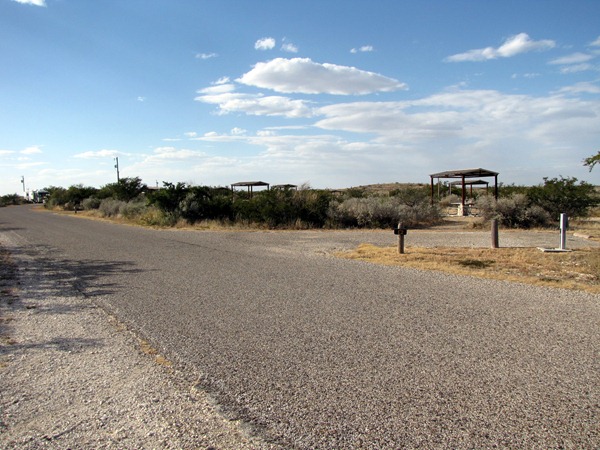 And it was a blustery hot afternoon about 80 degrees with a tail wind all day that gave me great mileage.Like many of the parks this time of the year….Nice and quiet,just a few neighbours further down the road.

Pretty thick desert, but all paved and clean.And no flies…..Just wind……The reason for no flies.

Ya think?…..No flies or wind here at Laredo I might add. 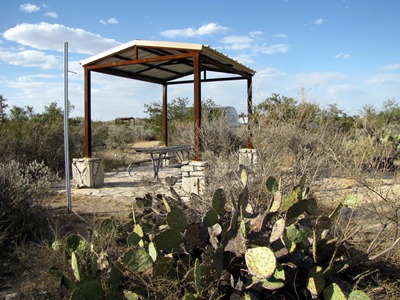 So I’ve been on the road for just over a month now and covered over 3000 miles,saw many wonderful sights that will forever be etched in my mind,and I wouldn’t have missed this experience for anything…But its time for a slight change of pace,so my next stop will probably be my last State/National Park stop for awhile.

Today I will travel another 75 miles southeast to Falcon Lake State Park,(This is the spot much in the news lately)where a young couple riding sea-do’s were intercepted by Mexican Narcos out on the lake, and the husband is still missing.

If I like this spot I may stay a few days and take a day trip into the Mission/McAllen area and search out a nice park to hunker down in for a month at least.I just wish that I had foreseen this last January when I spent 10 days in a motel there.I could have been checking out some of the area’s 500 RV Parks then. I have a park picked out near a big birding area,but want to check it out personally and if Its not what I want,this will give me a chance to drive around and check out a few others without having to drag the trailer with me.

Last but not least….I wanted to show you my little travelling companion who mysteriously appeared at my door one morning whilst in the Roswell area. 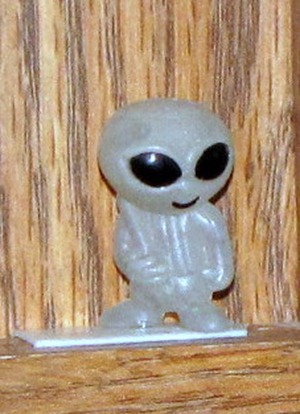 And that's the truth…I opened the door and there he was…….How strange is that?

Posted by Wandering Willy at 2:49 AM