Of Mice And Men….And Attack Chipmunks. 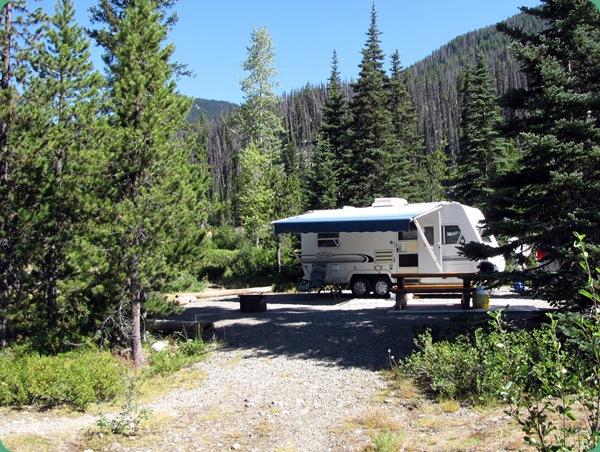 So goes the story of my past two weeks,along with having to put up with a camping neighbor with a yappy Jack Russell,running loose and going after all the passing dogs on leashes,and an owner who usually didn't even bother to get out of her chair to stop it.She would just turn and yell at the dog,so I guess the bad manners are with the owner,not the dog.(probably both.)I had just wished that it would shut up for just a little while.(End rant 1)

Then there are the screaming kids…Yelling and having fun is one thing,but shrieking all the time……What's up with that? Of course I expect this sort of thing when I go to a popular provincial park during the summer holiday season,but after living the snowbird life with all the other old “Blue-Hairs”during the winter season….It is quite a change and takes a bit of getting used to.(end rant 2)…..Although I know of some seniors that fall into the noisy rowdy category too.Some even shriek.

Then there’s the subject of today's title.I don't know why wildlife seem to come after me, example, last winters little episodes with Ants,Africanized bees and a Possum.Thank goodness the Alligator ignored me on South Padre Island Texas last January, but the first day I’m at Monck park two weeks ago, I’m having a few zzzz’s in my recliner and a chipmunk comes flying through the air from behind me and lands on my head…Scared the bejabbers out of me….And I might as well blame the Jack Russell for the mouse problem….he probably chased it into my trailer…….I’m starting my 13th season with this little trailer and this is the first time(that I know of) that I have had a resident mouse.It took me less than two hours from the time I discovered it until its execution…..Without a trap……..More on that later.

The weather for many was perfect during my 9 day stay at Monck PP with one uncomfortable day that had a high of 35c/94f and no wind off the lake,but most were breezy days around 30c,just right,but after steady days of it the heat was starting to get to me along with the others things previously mentioned,so with a long weekend coming up where the decibel level was sure to rise even higher here,I decided to get “Outta Dodge” and head for some higher ground for the long weekend,where I’m sure to find cooler temperatures.That's the nice thing about living in mountain country,so that's what I did.Within two hours driving time I was up another 2000ft in the old standby of EC Manning Provincial Park,arriving at noon this past Thursday,giving me a days leeway to find a good site before the weekend rush hits the place.And it hit with a bang the next day,but I was hunkered down and didn’t care,with perfect weather….The fresh cool breeze was sooo nice. 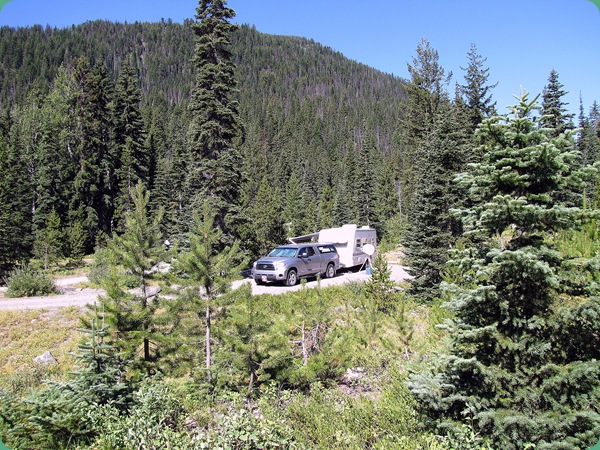 Now I know I brought the mouse with me from Monck because I remember hearing some rustling sounds on the final night,but just thought it was the lapping of the waves,because it couldn’t be a mouse….I never get those.But on my first day here at the Coldspring Campground, I heard overnight rustlings again and when I opened the cupboard door under the sink to throw something in the garbage at breakfast time,there was my little friends rear end disappearing further into the cupboard.

My first thought was……Geeeeze!…I don't got no mousetrap! (How's that for grammar?)My little brain whirled into action…I have friends coming up from home today,so a quick e-mail to Kathy to pretty please bring a mousetrap with you.30 minutes later a return e.-mail with a big “roger that”……..It sure is nice to have satellite internet in the middle of nowhere with no phone service.

But alas as Yogi Bear always said”Smarter than the average bear”,old Willy was smarter than the average mouse because after breakfast I emptied the garbage container,placed a new plastic bag in,then went outside and sat for awhile….then snuck back in and quickly opened the cupboard door and low and behold there he was,trapped in the bottom of the container looking for food…I quickly picked up the container(a small plastic waste basket) and carried him outside.Now I don't like killing any creatures,even mice but the thought that he may not survive anyway came to light,because if I let him go, he may be a different species being brought from a lower desert to a higher forest.I had to justify my feelings of guilt somehow. 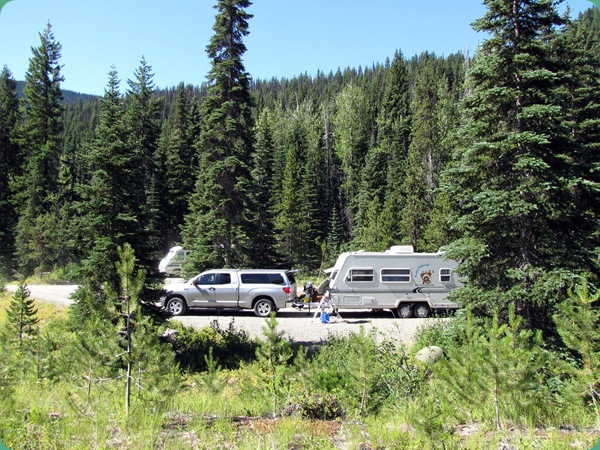 Well Kathy and Ernie showed up with a mousetrap for me anyway and I will soon find out if there are any more.

As you can see I haven’t been too active with my camera as all I have taken is 3 different angles of my latest campsite.Although the other day I took a walk along one of the campsite roads and walked right up to a young buck deer grazing at the side of the road,sporting a new growth of fuzzy antlers.He just stood there and looked at me(without a word of a lie)10 feet away from me…..I gave him a gentle hello in a soft voice and he just looked at me for about 10 seconds then slowly ambled away……That's right,my camera was back at the trailer gathering dust.

So this morning of course was our first cloudy day in 2 weeks and I get the camera out….go figure!…all I could muster up was this guy chowing down. 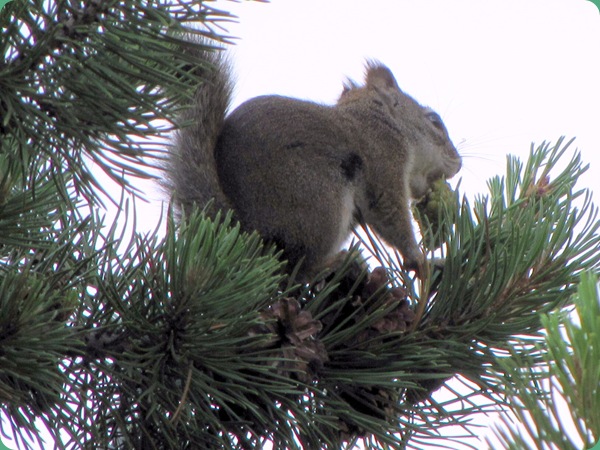 I had to work this one with Picasa a bit because it was just a silhouette to start with.Some day I’ll take the time to learn how to use a camera beyond point and shoot on auto.

Oh! and last week I finally broke down and bought a new barbeque after over 20 years with the last one. 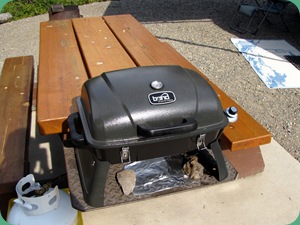 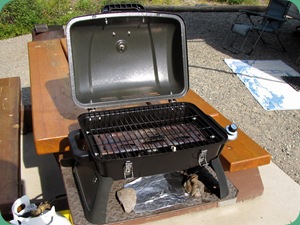 And I just love having that nice oven temperature gauge in the lid. 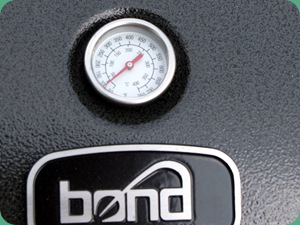 So now I’m dabbling in a few wrapped in foil type recipes.Real fancy stuff, like potatoes smothered in onions with a pork chop thrown in for good measure.A culinary genius I am….:)…Just a simple man with simple needs who writes blogs with Kindergarten pictures and lettering…….:)