I’m now at McAllen Texas in the Rio Grand Valley,which everyone calls the RGV,so since I’m going to be here for awhile,that will be my term in the future. 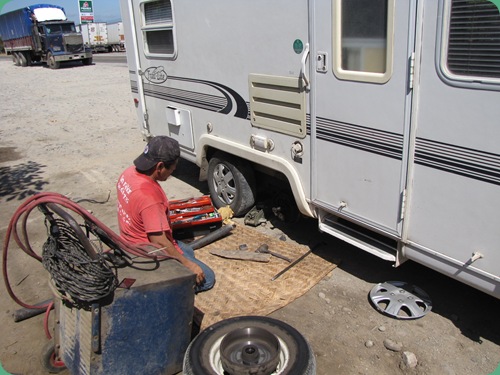 Here is the first guy,forgot his name,trying his best.I had to supply my toolbox.You can see the Pemex station sign across the street.And below,in front of the 2nd guys house.The equipment these guys use just amazes me.Right out of the dark ages.Just about the time this shot was taken,a big wind gust came up and blew a metal project he was doing,right into my truck passenger door,making a nice scratch………Welcome to the State of Oaxaca! 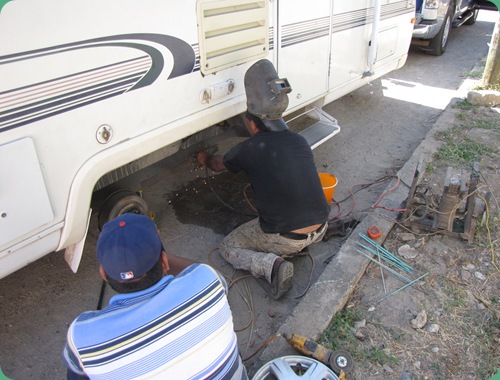 Going back to the ast 3 days since my last post.On Tuesday morning when I started the process to remove the axel at the Pemex station,I noticed that there seemed to be just  enough clearance in the wheel well to maybe give travelling a little further a try,so I packed up and headed down the road toward La Ventosa,the area with the big wind at the narrowing of the isthmus.The wind was no worse than many of my trips across the prairies in Canada.The area looked like around Palm Springs,with all the windmills.
I made several stops in the first hour just to check the wheel and feel the tire for heat,because my big concern was the fact that the fellow did a nice job of welding but a poor job of aligning the wheel,and it was tracking with a toe out and scrubbing,and rubbing the wheel well  bit.
My next mistake was missing the turn off to head back across the isthmus to the gulf coast,but it turned out to be a blessing in disguise because the following turn of events went well in my favor.I decided what the heck,I’ll follow my original plan and go via  the city of Oaxaca which is up high in the mountains via a long and twisty road,and if there is still a problem,at least I will have the trailer in an RV park while I’m away.
All the way up into the mountains I kept checking and found that the tire was rubbing a bit and you could smell the odor of burned rubber.And of course the fact that the day reached a temperature of 94 degrees didn’t help.
Just before reaching the city in the late afternoon,I found that my tire was so worn on the inside that the cord was showing on the tire,yet the outside tread was still like new.I stopped at a tire shop and had them reverse the tire on the wheel to at least get me to the campground before blowing.
Arriving in this beautiful city at 5000ft,fighting the afternoon rush hour traffic,I made it into the campground and got set up.The place was about half full and a friendlier bunch I have never seen,as many came over to greet me as I started the process to remove the axel,knowing that this is as far as the trailer is going to go under these conditions.So now it was back to the original plan of transporting the axel back to the US.
And here is why making the wrong turn and coming to Oaxaca ruled well in my favor,because in the park is a nice young couple from BC,who have been living here for 2 years.They live in their converted bus and just love the place and don’t plan on returning to Canada.There names are Leanne and Calvin,and Calvin is one of these cracker jack mechanics with all the know how and tools to do what has to be done to get the axel off,because the bolts where seized and needed to be cut off.He just waded in and had the trailer jacked up,blocked and axel removed in no time.The guy is a working fool,what a fantastic find for me.He really seems to enjoy doing this kind of work,his hobby is building dune buggies from Volkswagen bugs.
It was well after dark by the time I got the truck re-arranged and the axel loaded for an early morning start north,plus trying to figure what personal belongings to take and for how long.I’m parked right at the entrance to the showers,so a nice warm shower was the first order.
In part 2,I’ll tell of my 24 hour run for the border,just over 1000 miles in 24 hours,I didn’t know the old dog could still do it.
Posted by Wandering Willy at 5:08 AM