What A Wonderful Way To Spend The Last Day Of The Year.

For days I have been wondering,should I take the bus into the city of Puebla…Will I get lost?Its got a metropolitan population of two and a half million.I’ve never taken a bus anywhere in Mexico before,let alone a city bus….What's the routine? Yadda,yadda.Well,finally I dragged myself kicking and screaming to the bus stop down the street,knowing ahead of time to always catch the blue bus with the number 14 on it.Well that seemed simple enough. 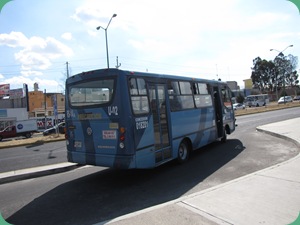 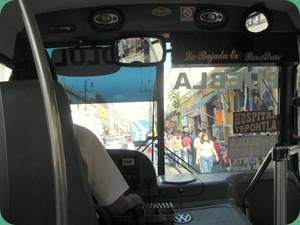 I sat behind the driver after paying my 5 pesos,less than 50 cents.NOW! I was in for the ride of my life.It was like a thrill ride and a bus demolition derby all rolled into one.WOW!

I have to give these drivers credit for what they have to go through in constantly jockeying for position on the crowded,narrow streets,jammed with people and vehicles.It was a ride that I’ll never forget.Sometime’s when he gets an open spot,he high speeds it past other cars and light standards with a fraction of an inch to spare.Even flying over topes without slowing down.I must do this again,I must have been all smiles,it WAS like a thrill ride.

Finally after about 45 minutes we arrived down in the centre of Puebla.And by the way,Cholula and Puebla are joined together with no population break at all.Its like one big city.

I got out taking note of the street number and marked it on my city map.So I can find my way back.The street was so full of people that I though they were going to run me over,so turned down a less congested side street and found this. 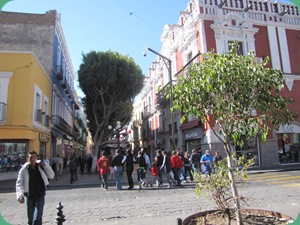 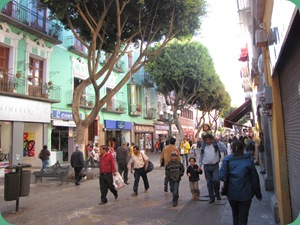 This is mainly a walking promenade called Cinco de Mayo and it ends at the main Zocalo,(main square). 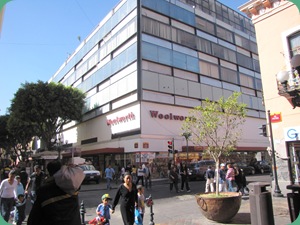 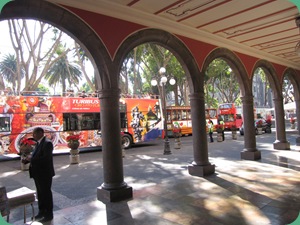 The architecture of this city has a strong Spanish influence and was designated a “World Heritage Site” by UNESCO in 1987.The city is a mixture of old and new with both imposing glass towers and colonial era buildings,featuring ornamental wrought iron  and walls adorned with Talavera tiles.It has the classic blueprint of cities built by the Spanish. 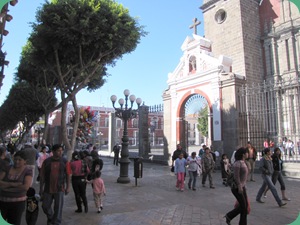 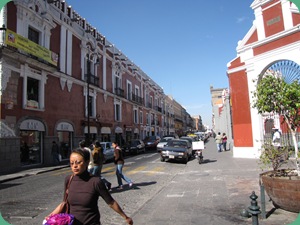 Having lived in Europe for 4 years in the 60’s,if a magic wand was waved and dropped me into this city,I would have thought I was in Europe and not Mexico. 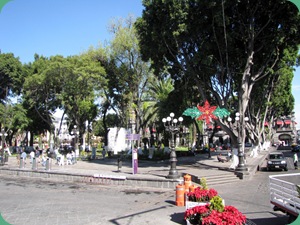 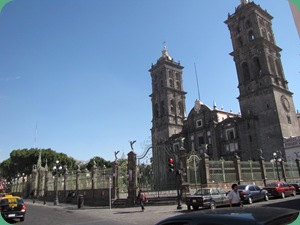 I finally reached the main Zocalo with the church across the street.This is actually the centre of the historic downtown,and a great gathering place.

That church is so immense and full of history and beauty that I want to feature it separately in another blog entry. 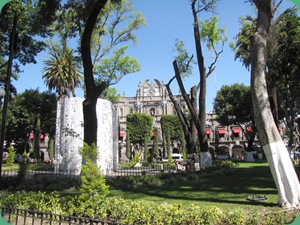 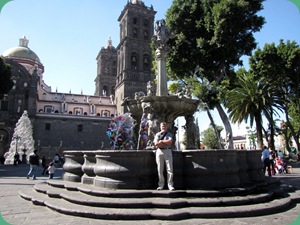 I spent considerable time just relaxing and watching the people enjoy this place of refuge in the centre of the city.In fact there are one of these plaza’s in all Mexican cities and towns.

I managed to ask a young lady to take my photo,which she gladly obliged.

It was now nearing noon and I was getting hungry,so I started to search among all the restaurants for one that was off the main area a bit and a little quieter as again I’m really a rooky at eating out in Mexico,and was a bit apprehensive about what to order, plus the routine. 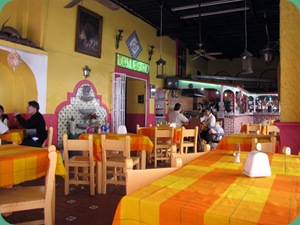 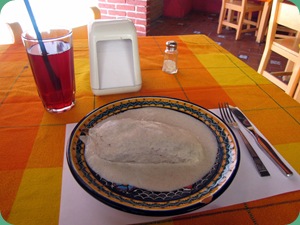 I found this one and sat near the door opening,to watch all the people and traffic going by.

Yes all you experts,that's “Chilies en Nogada”,created by the nuns to honor Agustin de Iturbide,emperor of Mexico 1822-23.Its a large green poblano chile pepper filled with mixture of cooked chicken or pork,onions,garlic,raisons and other dried fruit.It is topped with a creamy white sauce made from ground walnuts and sprinkled with parsley and red pomegranate seeds,with the colors again recalling the Mexican flag.

Restaurant menus normally feature this seasonally ,(July through September),but I noticed it as an all year round feature on the menu here.And since it would be my first one, was anxious to try it.  I enjoyed it,finding it a little different than anything else that I’ve ever eaten.I did need the large bread roll that came after I took the photo,to help me along.

After lunch I set out again to work my way back through some different streets to get to my bus stop.All the shops were a delight to look into and explore as I walked along.I think I saw more shoe stores than anything.Just inhaling the the atmosphere of old el Centro was really a relaxing delight. I NEVER feel uncomfortable in places like this in Mexico,for all you doubters out there….Finally after walking and exploring a few more blocks,I came across this entry way to a covered mall. 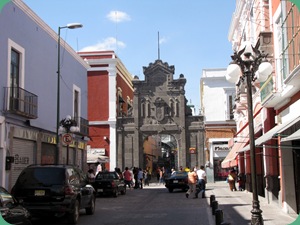 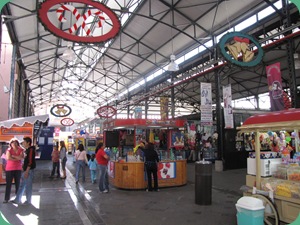 Even had an Ice cream parlor,below. And finally a shot back at the town square,looking down the street at some more interesting architecture.The dark building is the “Palacio Municipal,”the City Hall,noted for its French Renaissance design. 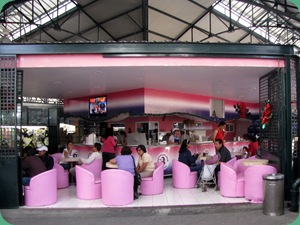 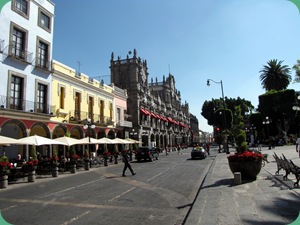 Well to close,the bus ride back was even a greater thrill ride as the traffic this new years eve afternoon,was getting much heavier,if that is possible.But I was deposited back where I started with a 2 block walk back to the campground,ending a wonderful day with new and exciting experiences.

I should have made a trip like this many years sooner,instead of laying around beach campgrounds on the west coast,going to the same places and fighting the same gringo crowds every year. Oh well, starting tomorrow I‘ll be heading toward the east coast beaches,what will that bring?

Posted by Wandering Willy at 7:19 AM