When I left the Toyota Plant on the south side of the city,out in the sticks,I was a little apprehensive about driving into the 2nd largest city in Texas,with a city population of 1.3 million and a metro population of 2 million.I still really had no map, outside of an aging Rand McNally,so I relied on Miss Garmin to get me to the Alamo,which I knew was down in the heart of the city.

Below as I enter,with the downtown in sight and hidden behind the telephone pole is the Tower of The Americas.I was surprised to find the traffic very light on all the downtown streets,especially around the Alamo. 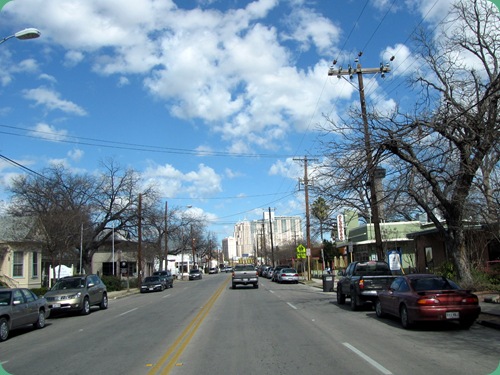 My trusty GPS took me right to it,but of course there were “no parking” signs everywhere,but a block later I found a large, half full parking lot…..Perfect…I was good to go…Even if it was $6.00 and hour.Those trees are part of the Alamo grounds. 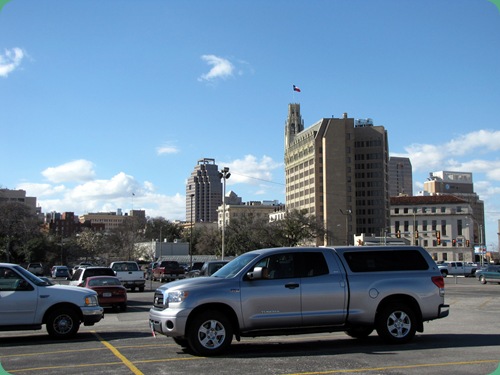 So another long time dream has come to pass….Me at the Alamo.Will this be my new header picture? Hummm. 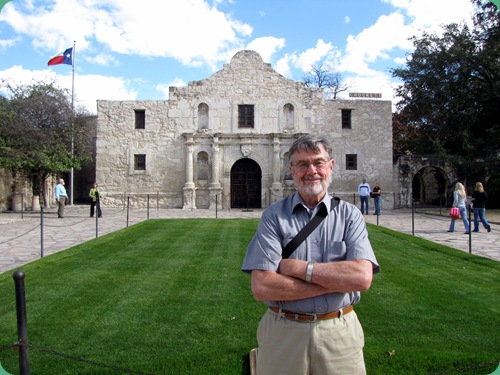 The famous landmark behind me that most people recognize,is the museum (The old Mission)and they ask that no pictures be taken inside….Hmmm,this is not my day,so we are relegated to photos of the grounds.The museum had a nice scale model of how the old mission looked during its hay day and I was surprised to see that most of the original grounds are now swallowed up by city buildings surrounding us.In fact the chapel behind me was actually in the right  rear of the rather large compound. 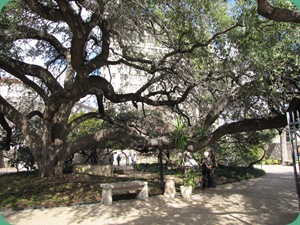 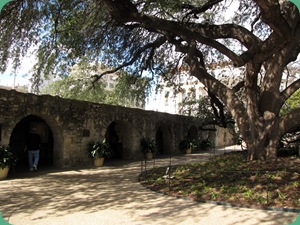 Some of the remaining grounds above.The museum did have some of Davy Crockett’s personal things like clothing and rifles,and a portrait that didn’t look at all like Fess Parker:) And of course we must not forget Jim Bowe and his collection of knives.

You can see below how deeply entrenched the old mission is,in the down town core. 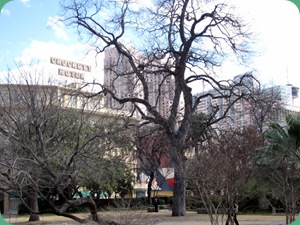 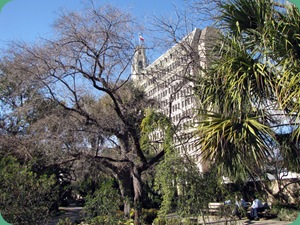 I really was running out of time with a more than 4 hour drive ahead of me.It would have been nice to have spent more time but the thought of paying for a motel here overnight,plus the one in Pharr and the campground fee in Oaxaca all at once,was too much,so I opted to head back. 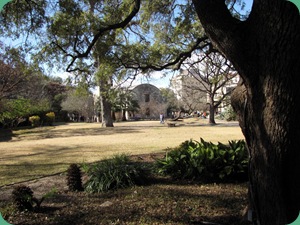 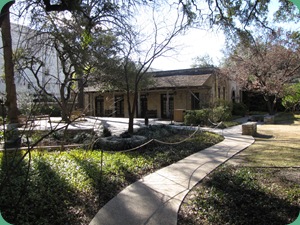 I did make a stop at the very nice gift shop and bought a tee shirt to mark the occasion and headed back to the parking lot.It was exactly an hour as I paid my 6 bucks and within seconds was on another interstate heading out past the Alamo Dome and southward.I must admit San Antonio deserved a longer look like the “River Walk” among other things,but maybe another time.

I knew that I wasn’t going to make it all the way back without some kind of a nap, as the first hour back on the road had my head nodding,so a very convenient Interstate Rest Area came into view and I picked a back corner and climbed into the back seat where my trusty pillows were waiting and dropped off quickly.An hour later and refreshed,I was back on the road getting back to the RGV around 8:30.So another big driving day with the better part of 14 hours on the road.I have to keep up my conditioning for 1000 mile return to Oaxaca,then my 3500 mile return home.I’m sure this winter will go well over 10,000 miles total by the time I get home.

Just as an update,I haven’t been answering some of the questions in the comment section because I don’t have an answer.I’m probably looking at early next week before I see my new axle’s,so I continue the waiting game here in the “No-tell-Motel”……..But I got HBO!