Blowing My Own Horn…Plus Some Other Ramblings.

The past few days have been preparation days here in the Yuma area,despite a couple of days of howling winds and sideways gravel and a fine film of dust on everything….Life is good I guess.

I’m one of those (one at a time kind of people,)I go to town and get one thing done for that day,then come back saving the next task for the next day.Monday was get a new tire for the trailer day.The first place had a 6 ply in the computer but not in stock…Hmmm! So on to the next place…They had 8 of them but I would have to wait for a few hours to get it done.This meant I will have to do more than one thing today,so why not hit Wally’s place since there are 3 of them to choose from in the area.

I needed a new jack for raising the trailer because even though the trailer is 4” higher,the jacking point now is lower than before and I have to dig a hole to get the jack in place…Not good on pavement.So I found one small 2 ton that will supplement my 4 ton that I have been using.So along with that and a couple of pairs of cheap Chinese pants,I exited the store and headed for the nearest Burger King for a Whopper fix.

One whopper and a fender-bender was the next order of the day…As I was preparing to exit the BK parking lot,I spotted someone over my right shoulder in a vehicle stopped.I figured he was waiting for me to exit,so I backed out and BUMP! It seems someone behind me was also backing out and we met in the middle.I guess the fellow waiting and watching in the other car was just enjoying the fun.

We both jumped out apologizing to each other as I looked at the big dent in his bumper and no mark on mine,then as we were talking his dent popped back out as it was a vinyl bumper.We both laughed,shook hands and decided no harm done…Chalk that one up to being lucky.

The past couple of days were spent getting my satellite assignment changed back from the Mexican satellite to the one I use in the US and Canada.It took 48 hours for Galaxy Broadband to respond to my e-mail as I waited and waited watching for the one light to go out on my modem,telling me that I have been decommissioned from Satmex5.

Finally during the big wind/dust storm,they finally get around to it.Not to be deterred after all this wait,I brave the elements and get her re-pointed in the darkness.All went fairly smooth considering the usual little glitches of re-registering on the new satellite.At least I didn't have to phone for help this time,so things are looking up.

I waited until daylight to change over the television part of my dish set up,as the BOW,(bird on a wire)has to be changed from… 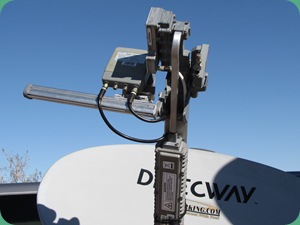 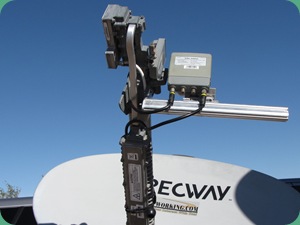 To keep the automatic alignment of Star-Choice in focus with the new internet satellite assignment.For those of you reading this that have the same set up…I have found this winter that if the TV signal gets weak in southern Mexico that the ever strong internet signal can sometimes be readjusted to a weaker point allowing Star-Choice to be adjusted stronger without losing your internet.

The other day I checked in on the blog of famous travel writers Mike and Terri Church,and was very surprised to find that they had put in a bit about me from the time that we met at Hacienda Contreras,a few weeks ago http://www.rollinghomes.com/Blog/Blog_100207/Blog_100207.html  Bottom of page.

Terri had snuck up on me when I was all greasy and dirty working on my axle problem,and snapped a photo.Being called a “famous visitor” tends to make my head swell as they are the famous ones. She told me at the time that many of the RVers travelling in Mexico were following my exploits.I did notice quite a few hits on the site meter from Mexico every day and wondered as non of these people are on my reader list as far as I knew.

It still never ceases to amaze me how almost every week I see someone on the site meter who is sitting for up to 3 hours steady,reading through the archives of my blog.How can this semi-illiterate fool capture someone's attention like that and hold it for so long.Usually in face to face conversations with friends,they are turning off and dialing me out in about 5 minutes.

I have received some nice e-mails from people who take the time and effort to search out my e-mail addy.One nice person named Charles, in Alberta,was full of encouragement during my axle crisis and he called my writing sort of succinct…….

Well I guess Charles is right.I calls it the way I see’s it…..So I want to thank all the people who have sent e-mails and welcome the new readers this past week.Some of you have some great blogs.

My time is winding down here and I still haven't made a final decision as to which way to go home.My favorite is straight up through Nevada to Twin Falls Idaho,then west into Oregon as this is the way I came down in November.I much prefer it to I-5 with all the traffic,potholes and expensive California gas. I guess the weather forecast will determine this.

It would also mean that I wouldn't be going to Borrego Springs and pulling my surprise pre dawn attack on the Bayfield Bunch.Big Al isn’t responding to my threats,so he may be in hiding now,a typical eastern tenderfoot I guess……So only time will tell….got to keep the prey off guard.  Dig in Al,you never know.

Posted by Wandering Willy at 5:14 AM