The Misadventures Of My Canyon Hike.

Hopefully this map will fit and be readable to those who are interested.You can see the shape of the canyons and the north and south rim drives.Tuesday I covered all the north rim lookouts and showed the photos in the last blog entry. 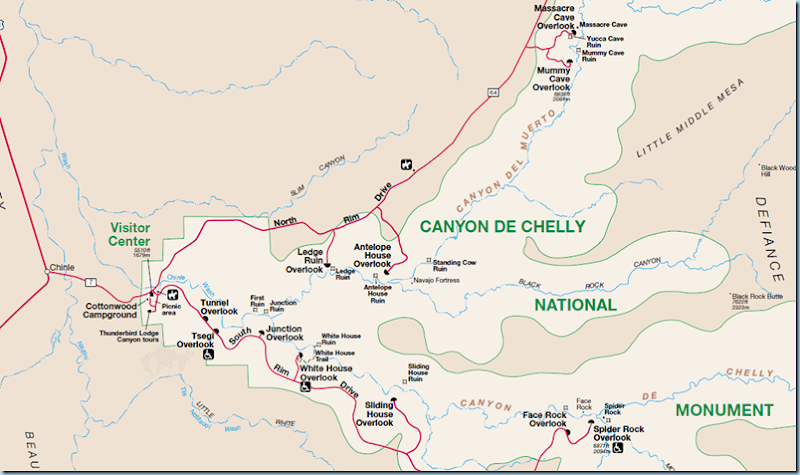 Todays entry will cover yesterdays misadventure’s in hiking.After another cold night of frost I got a fairly early start about 9am.It was only 37 degrees F as I drove out the south rim drive all the way to the Spider Rock Overlook. 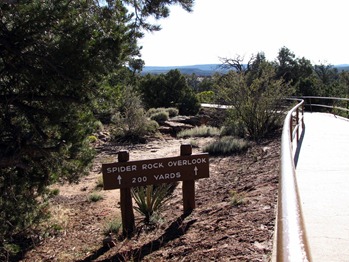 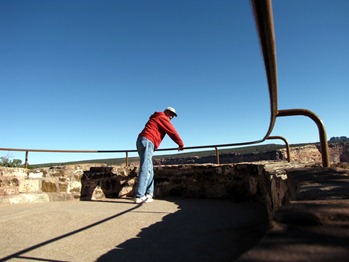 I had the place to myself as the cold wind whipped up from the valley below.But what a view of Spider Rock,a sandstone spire that rises 800ft (240m) from the canyon floor. 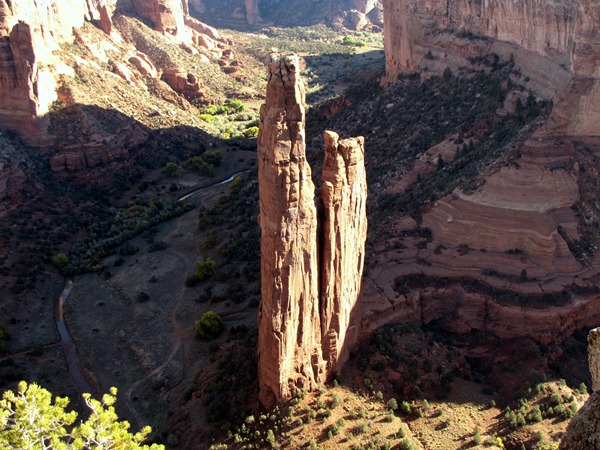 I then worked my way back checking out all the other lookouts until I got back to the White House Ruins Overlook where the hiking trail is located.This is the only place that you are allowed onto the canyon floor unescorted.

By now I realized my heavy winter jacket was going to be necessary.So with a sandwich in the pocket,I set out.By this time there were several others prepping to set out also.Below is the view of where I’m going..You can see the slit in the rock just above the trees centre right.The canyon isn’t quite as deep in this area.I think about 700ft. 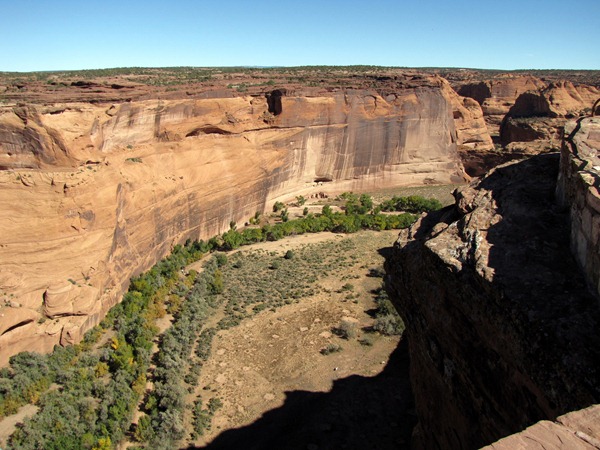 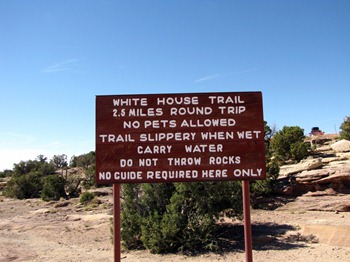 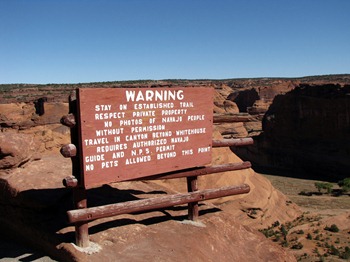 Well I passed the first sign near the parking lot and followed the rim looking for the second sign at the beginning of the decent….It was here that I was getting too close to the edge with a 700ft drop and moved away from the rim toward a drop down in the rocks that looked like a pathway……carelessly I descended into this 5 ft. drop down and lost my balance,landing heavily on my jaw,wrist and camera,and came up bleeding like a stuck pig from my lower jaw.I used kleenex over the cut until I figured the flow had slowed up a bit,then along came a couple of young native fellows and I asked them to take a look and see how bad it was….They said it just looked like a scrape and wasn’t bad…..I really wanted to do this hike and didn’t want to abort the venture so carried on holding the kleenex to my chin.I guess I was a little in shock and disoriented because I spent the next 30 minutes walking in the wrong direction……After awhile an old toothless native came along and told me that the trail was away back in the other direction…..Sheesh! I’m going to be exhausted before I even start at this rate. Finally I saw people again and they were standing at the second sign just before the decent.And what a decent it was. 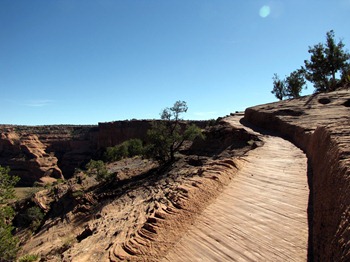 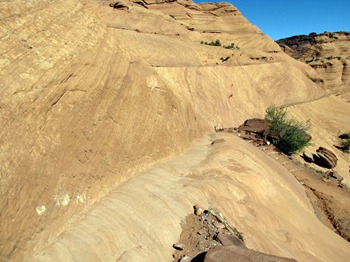 The section on the left wasn’t bad but the area in the RH photo was downright scary with a gusting wind and a big drop if you slip…My concern is that I have inner ear damage and stagger at the best of times,in fact I’d never pass a ( heel to toe) test at a “Police Roadblock.”…..Drunk or sober.

Below is a shot looking back up at the area I just descended from. 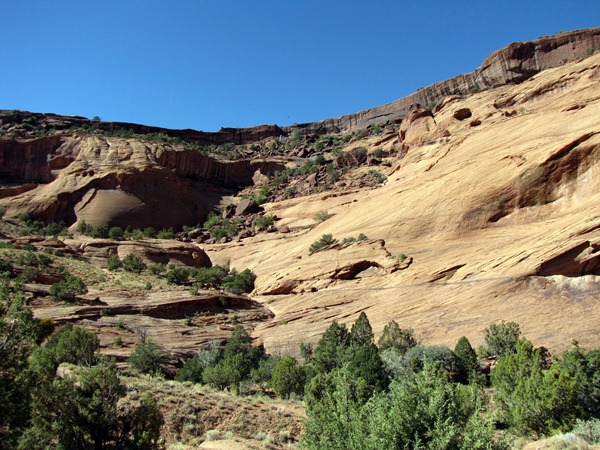 Finally almost to the canyon floor and with all the huffing and puffing coming down in this high altitude environment…….What's going back up going to be like?

Just this much more descending to do. 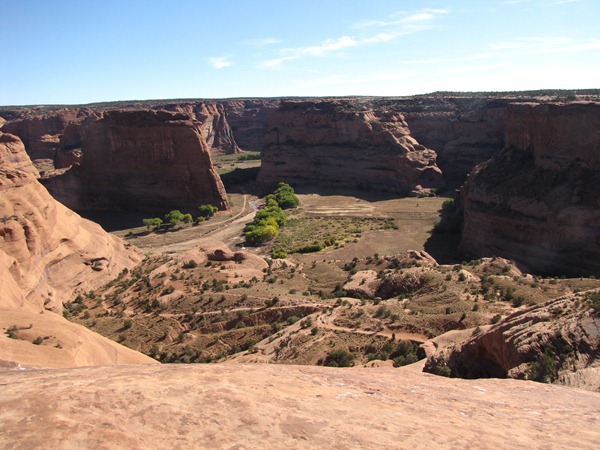 Finally the canyon floor and a short walk to the White House Ruins. 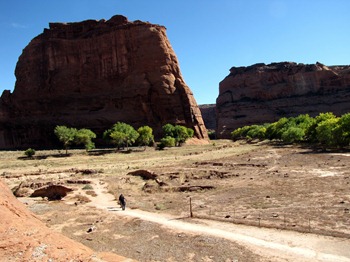 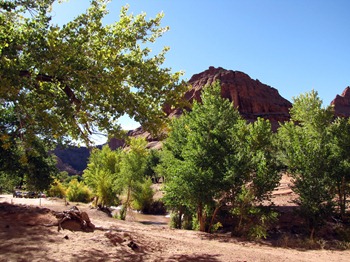 When I reached the kiosk area where the Navajo sell their wares,I realized that I had a chin covered with blood…and a nice young Navajo lady named Loraine came to my rescue and supplied me with a band-aid,for which in appreciation gave her $5.00,which made her very happy since she didn't ask for anything.Here is Loraine. 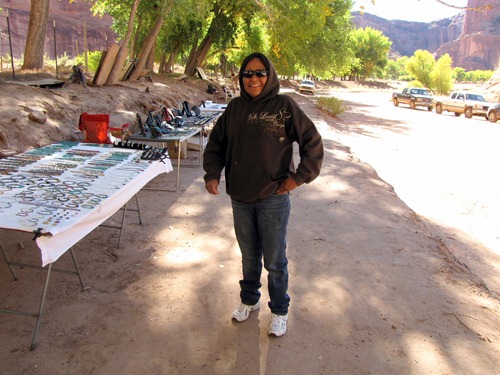 Now on to the ruins a few yards ahead. 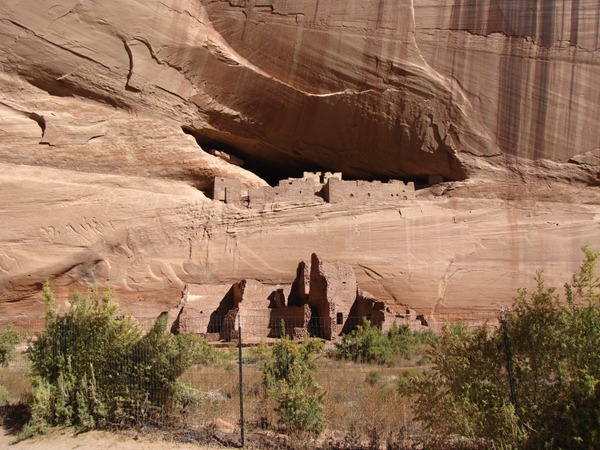 I will finish rambling on about the rest of my day with a few more shots of the hiking trail….And by the way the hike back up wasn't all that bad in the huffin and puffin department. 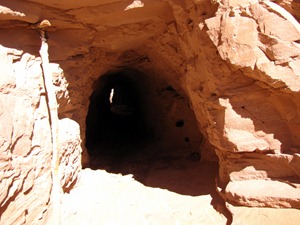 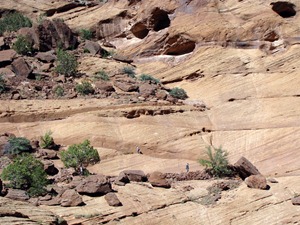 After getting back to the truck,I found that the band-aid wasn't staying on because of the beard and it was still bleeding,so in desperation when I got back to the campground,I made the decision that after almost 13 years, the beard was going to have to come off. 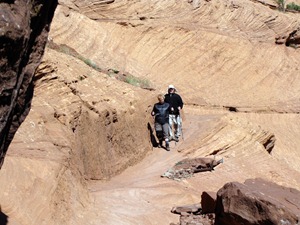 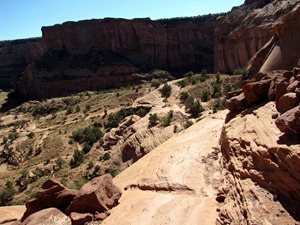 Well I got out the razor (barber type)and did the deed……Gawd! what a sight after all this time….I didn't realize how old and ugly I had become. 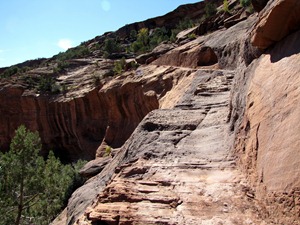 That last shot above was one of the scariest areas to stagger along,and a good drop too if you trip…..And here’s something even more scary below. 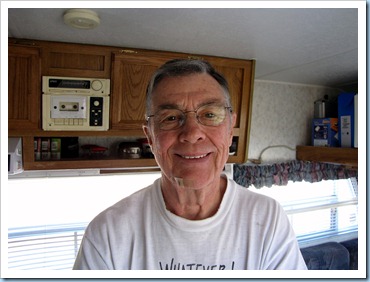 Well I’m hopefully off today to some warmer environs,so my stop tonight should be in Albuquerque New Mexico,where the weather forecast is sunny and warm for the next few days,then tomorrow on to Roswell for the weekend…..And yes I believe all that alien stuff from back in the 40’s in Roswell and want to see the tourist traps that promote this stuff…..Until next time.

Posted by Wandering Willy at 2:55 AM