A Change In The Weather 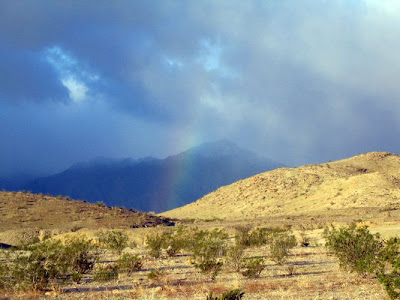 24 hours ago,as I laid awake listening to and feeling the howling wind,I would occasionally hear the sound of rain on my trailer's vinyl roof,(you can hear a pin drop on that roof)but every time I looked out,all I could see was stars,strange!Is it my imagination?But as the day dawned I could see these small wind blown clouds passing over after dropping snow on the 3000/4000ft mountains to the west,and dropping their remaining sprinkles on me.
Note the hint of a rainbow on the next cloud coming. Pic above. 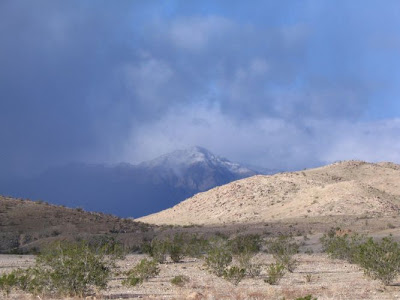 The same shot a little later,as it cleared off showing a dusting of snow on a peak that a local told me is around 3200ft.Pretty low snow line for this area after a 75 degree day 24 hours before.
The day finally cleared off and rose to 62 degrees with a stiff breeze most of the day,making it feel much colder.
I needed propane and gas,so headed into town as Ron and Sue were preparing a trip down to Tamarisk grove camping area to look for some long eared owls or something. 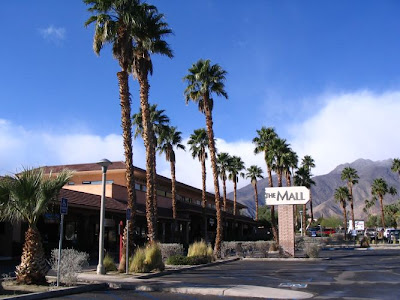 I got my refuelling needs looked after first.(Strange! 3 gas stations in town all with prices 10 cents a gallon more than the other)$2.37...$2.47...$2.57 and the national average is $2.07.
I took a quick picture taking trip around the town,with the first stop at the Mall.
A few statistics: Borrego Springs is 780 ft above sea level.Its situated in the extreme western edge of the Sonoran desert,completely surrounded by the Anza-Borrego Desert State Park.
It has 2789 permanent residents and an estimated 10,000 in the winter season.
Its often listed as the hottest place in the U.S. on certain summer days,with the record being 121 degrees/49c in June of 1996.
6.86 inches of rain annually,about the same as Osoyoos B.C. 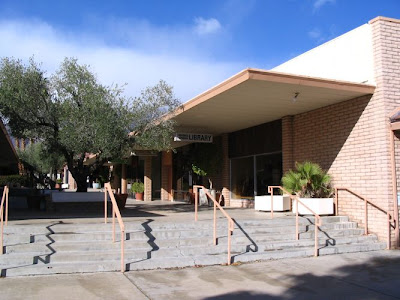 The back side of the mall,above and below.Many interesting little tourist shops and some empty shops.A story of the times.
You'll note the lack of people around as I asked them to all stay away whilst I took pictures. 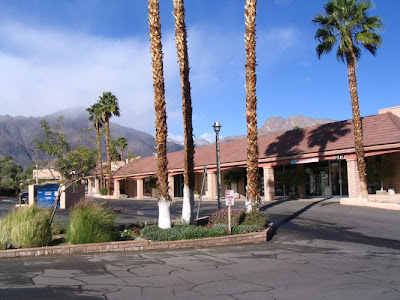 Below is a shot taken right across the road from the parking lot,as the town is in a desert. 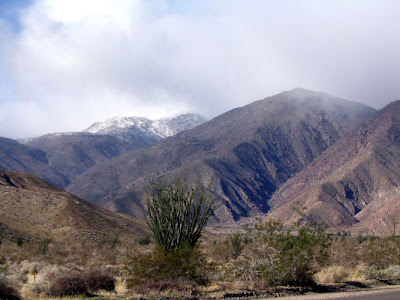 I drove out to a nice residential area in the north west part of the town and found many beautiful homes in a natural desert setting,well spaced lots,and that really "cool" desert southwest style of the homes.

Here are a few examples 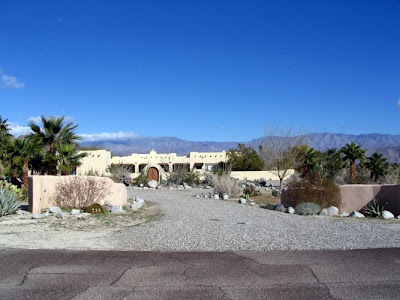 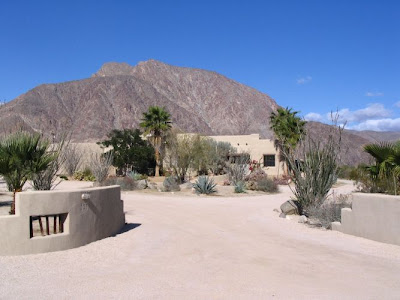 This one below had a few citrus trees in the driveway,the first being a grapefruit and the second one a lemon tree.I didn't want to trespass any further.
They were all loaded with fruit,in fact I have been enjoying quite a bit of free morning grapefruit these past few weeks,that I collected from the Yuma area. (Not theft........friends) 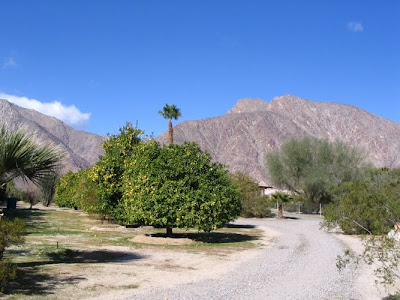 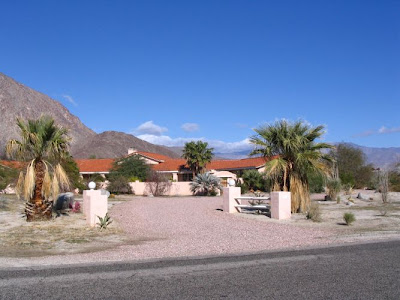 Just before noon, I arrived back in camp after a quick stop at the food market in town.Ron and Sue arrived back around 2:30 and told of not caring for the Tamarisk spot,decided to go up the hill to the tourist town of Julian for a look around and some of that famous apple pie from the pie factory.I bet knowing those guys,they didn't even need directions to find the pie factory.
I hope to get back up there again,as its been about 10 years for me.


I'm learning the little tricks of blogging slowly,so I want to try another test thing here. I hope it works. Click below.

Posted by Wandering Willy at 3:53 AM