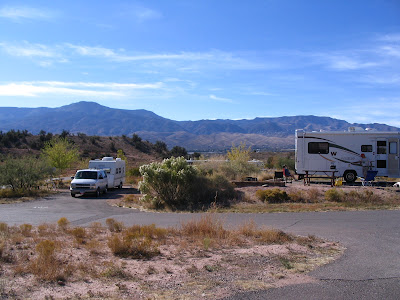 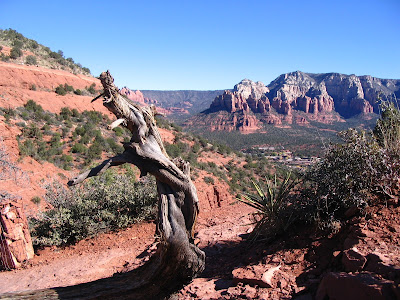 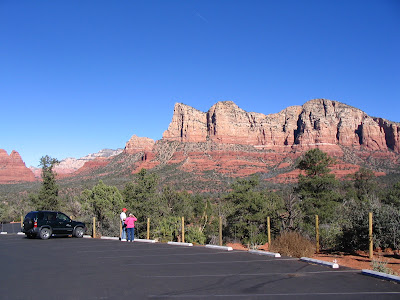 Ron and Sue taking in the sights near Sedona 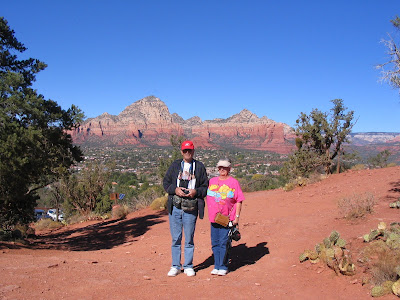 Ron and Sue at the Vortex site.The city of Sedona in the background. 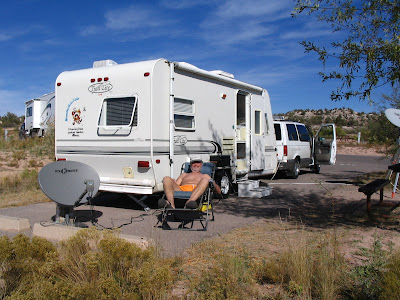 
NOTE: With several posts today,this is the newest.Please scroll down then read up starting with the first post,part 2.
We got an nice early start on Tuesday morning,heading along the Lake Mead road over to the Hoover dam.The inspection only took a few minutes with very pleasant security people checking the storage compartments.The new highway and bridge being built to bypass the dam is very impressive and should be completed in a year from now.

We made a refuelling stop in the northern outskirts of Kingman Az. and I got myself into a bit of a possible con as the adjacent tire shop had a worker out checking my trailer tires as I was refuelling(without my knowledge).He showed me how the treads were separating,(I couldn't see anything wrong but what do i know)as this was the 2ND time that this had happened and I started to believe that maybe something was wrong.The other time was at Wells Nev. with the same situation.
I knew all my tires would have to be replaced by the time I got home anyway,but figured I could get one more travel season in on them.Taking some consideration for safety issues I bit the bullet and replaced them all on both the van and trailer.
I told Ron and Sue to carry on to Cottonwood while I got this done as it would take a couple of hours,so had lunch while they replaced the tires.After all was done I set my Garmin for the Dead Horse Ranch State Park near Cottonwood a couple of hundred miles away,taking I-40 to Ash Fork in the high country,then south on 89 to Prescott and Prescott Valley.Boy! getting through this populated area for the first time would have been very frustrating with out the Garmin,but she took me right to the main gate of the state park without any problems.It was getting dark and the campground was only about 1/3 full.I searched for Ron and Sue,but it looked like somehow I got ahead of them.Hmm strange,they had over an hour head start,so I selected 2 sites close to each other and set up in one and kept calling out on the radio long after darkness had set in and finally a response as they were entering the main gate,so I guided them to my location and they parked in the site above me.The reason for being late was that Ron took a wrong turn at Kingman and ended up going south instead of east on I-40 despite the complaints coming from Sue and miss Garmin.Nuff said,Ron wants to put this behind him like a fading memory,so he hooked up to my Starchoice and we called it a day.
We had a nice weeks stay here with good weather.I got my daily exercise routine in doing my slow jog around the park and hiking trails with lots of up and down terrain for a good heart rate.Ron and Sue spent most of the time touring the area and doing their birding which is of number one importance to them.
We did take a side trip together up to Sedona about 25 miles to the north.What a beautiful little city in a beautiful setting.The city is fairly new and modern with that wonderful desert southwest architectural flavor in its buildings.(even the Burger King).
We wanted to visit one or more of the famous Vortex sites and see if being there would make us feel any different as it is supposed to have wellness powers.Some people where laying on there backs meditating but by the time we reached the top of the hill,we were lying on our backs with exhaustion.
It was a great day and an experience for all just being in this beautiful part of the world.
Posted by Wandering Willy at 4:22 AM