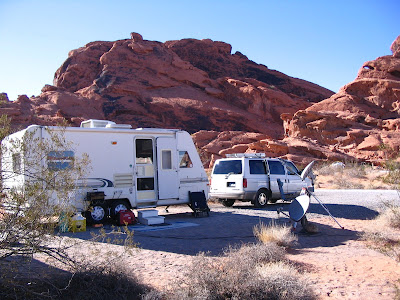 All set up with both satellite dishes.Hunker down time. 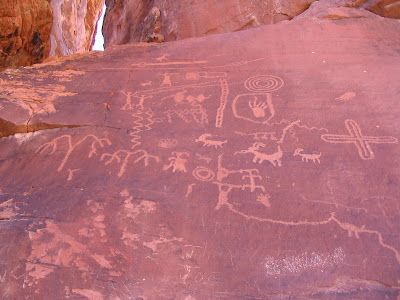 Ancient writings on the rocks at Valley of Fire St. Park 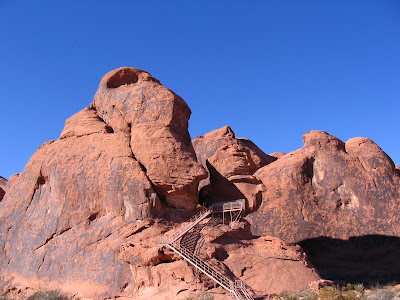 The climb up to see the writings 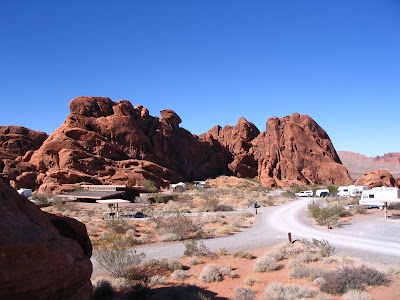 General view of part of the campground.The writings are

just around the corner on the right hand side.

Our arrival at Valley of Fire on the morning of November 5th was not without incident as after selecting a site, I proceeded to back in and caught my rear stabilizers on a low cement stop that I guess is designed for stopping the wheels.Not only did I hit it once and realize my mistake (slight damage)but hit it a second time(write off).Oh the joys of travelling alone and not having a spotter.I could of waited for Ron and Sue to get settled and help but Iam an impatient type so learn my lessons the hard way.

This is really a nice park at $14.00 a day with water taps at each site and a dump station near by.There is another camping loop that has power and water but no dump, for $24.00 per day.

The next day I drove into Henderson to Camping World to buy a new stabilizer for the trailer and to exchange the Buddy Heater that I had purchased at the Burlington store,which was a (no light).I took the route along parts of lake Mead.it was almost an hours drive,very twisty and slow,returning via I-15 making a round trip out of it.

We stayed 1 week at this park,doing day trips and taking pic's. using Sue's Chevy Tracker as the vehicle of choice to tour around.Several visits where made into Overton about 30 minutes away for supplies.Overton is a nice little town with all the necessities like supermarket,bank,Ace hardware, gas stations that sell propane etc.This would be a nice area to spend the winter if it didnt get so cold.We also noticed a nice boondocking spot on the hill overlooking Overton,that had several rigs.This is a good way to go when travelling south if you want to avoid going through Vegas.

Posted by Wandering Willy at 3:19 AM