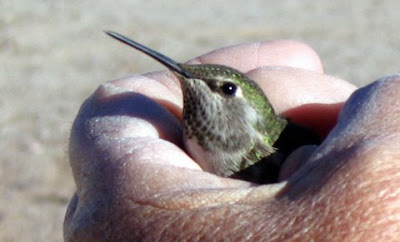 Strange thing happened yesterday as we were getting ready to depart our campsite.Sue had taken down the humming bird feeder the night before for the move and this little guy comes in the morning as we were packing up and says,"Hold on a minute!"
If you guys are leaving and taking my food,I'm going too,and promptly flew into Ron and Sue's motor home,landing on the dash.So Sue gently picked him up and took him outside and told him that he was doing fine before we arrived,so will do fine after we leave.Besides go over to the neighbors,they have a feeder.So off he went. We thought we could hear hummer mumblings as he flew away,something about "damn tourists".
After a short run of 20 miles we are now set up at Organ Pipe campground.Just as we were arriving,a small caravan of single people, (singles group) about 7 or 8 rigs was leaving to head into Mexico.I recognized some of them from my stay in Tenecatita Mexico a few years ago as they had dropped in for a few days, creating a lot of confusion trying to fine parking spaces for that many at a time,unannounced.
This park seems to have quite a few more people than a couple of weeks ago as the northern after Xmas hoard descends.
Posted by Wandering Willy at 4:20 AM