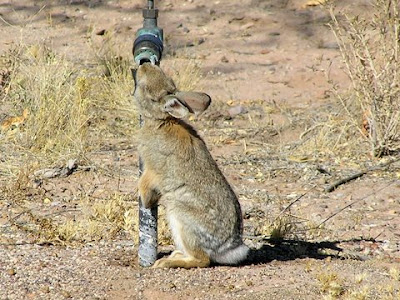 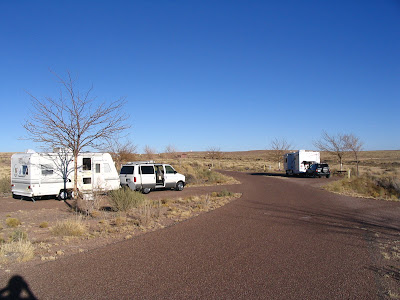 The almost deserted campground at Homolovi Ruins State Park. $15. with electric,$10. without 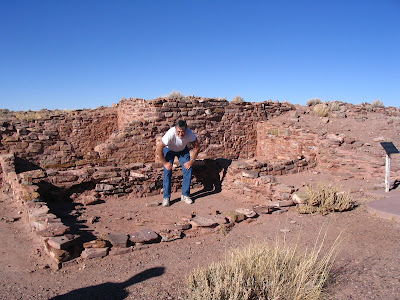 Willy standing in some of the Ruins,once a room for the ancient people, the Anasazi 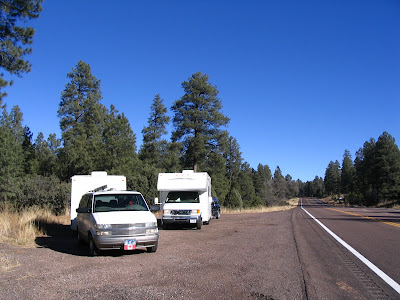 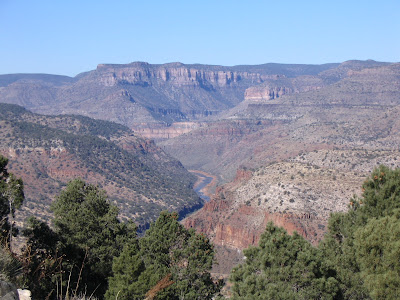 The Salt Creek Canyon south of Show Low.The highway goes all the way to the bottom and back up to here and its still not the top. 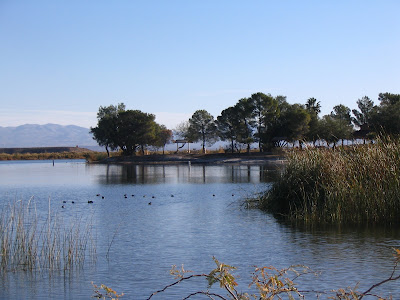 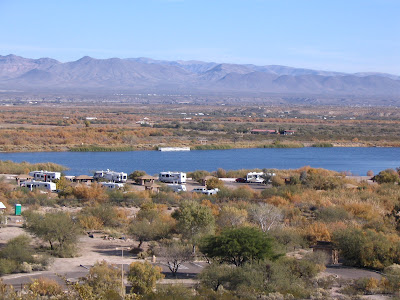 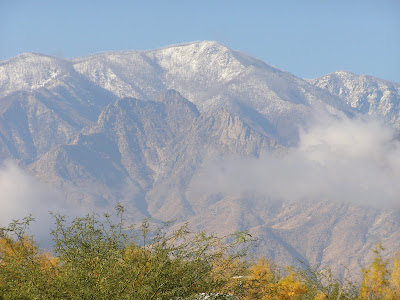 10'720 Ft Mount Graham just a few miles away from Roper lake.Note the light dusting of snow after an overnight storm here in late November.

Nov 18 and we are on the road again,heading north on I-17 toward Flagstaff,rising up into the ponderosa pine country.(they seem to start around 6500ft in this part of the world).

It was cool in Flagstaff (in the 50's) at 6900ft but pretty country with the pine forests,but surprise--surprise after a few miles of travel eastward from the city,the countryside took a drastic change and looked more like south eastern Alberta around Medicine Hat,and stayed that way until we stopped at the Homolovi Ruins State Park near Winslow in the early PM.

We found the campsite almost deserted,just a couple of other campers.After setting up we spent the afternoon touring the ruins and visitor centre in the cool sunshine.It is an interesting place but one day was enough as we hit the road the next morning in cool below freezing temperatures. We carried on to Holbrook then turned south on highway 77 down to Show Low where we picked up the pine woods country again,then into the Apache reserve and down into the lower elevations of the Salt Creek canyon.All just beautiful country.Boy! those Apache's sure picked great country to live in.

Finally just before noon we reached Globe and lower elevations and warmer temps and a Taco Bell staring us in the face.I almost had to hold Ron and Sue back as they needed their fast food fix.And so did I.

Mid afternoon found us going through Safford and nearing the State park just 6 miles away.Now the temps were in the 70's as we were down around 3000ft.

The park was only half full but because of Thanksgiving coming up,many sites were reserved,but we got 2 un-reservable sites together with a view of the lake and set up for a 2 week stay.

After setting up,I received a visit from an American couple who have a popular Blog and website called rv-dreams journal.They had a problem with their satellite system and were awaiting parts,so I offered the use of my wifi system until the parts arrived.Luckily they were able to get my signal from their site,so that made them very happy and they featured us in their blog,which started my interest in trying this.We got together just before they left a week later and enjoyed a campfire and pecan pie.

Safford was a nice city for shopping and not full of tourists as this area seems to be missed by many snowbirds and the park has to be the favorite for all of us so far on this trip.We will most certainly come back in other years.When we left on the 1st of December,the host was pleading with us to stay as it was almost deserted.This place was a treasure for birders as Sue couldn't believe how many new species she saw every day right in the camping area.

Posted by Wandering Willy at 11:25 AM