It's a Rock and Roll Lullaby 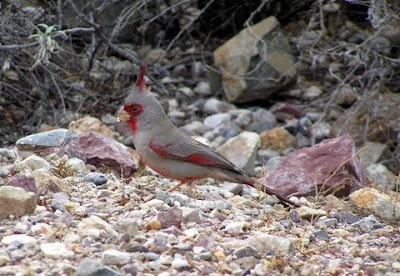 Before I start my morning rant,I wanted to show a pic of one of the many birds that have visited our campsites in the past couple of months.This is the Pyrrhuloxia male that hopped under my chair that day at Gilbert Ray(Tucson).I must thank Sue for this one as my camera was in the wrong place at the wrong time.Very similar to the female Cardinal,I believe beak color being the major difference.

Saturday morning,just after 2:30 A.M. 57 degrees and the wind has been relentless since yesterday morning.Thank goodness the trailer is positioned to protect the 2 satellite dishes from the wind as they probably would be long gone by now.Sideways gravel is not my thing.Must be a big storm passing to the north of us,probably in the pacific northwest.
This is not the first time,nor the last I guess, that I will go through this.I remember one year here that it was blowing heavy dust and we had to close all the windows and vents to keep it out,but the temperature was in the 80's so with no ventilation,was like living in an oven.So it was live with fine dust all over everything or slowly bake.
Ah the joys of Pilot Knob!I still love it(when its nice).Last Feb. I was here for 3 weeks and it was much the same on occasion,except that time a 5.4 and a 5.2 earthquake nearly threw me out of bed,both in a span of just over a week. It makes the way the wind rocks the trailer pretty mild by comparison.Luckily there was a 3rd quake the day I left for Quartzsite,so I missed that one.
While in a complaining mood I must mention that my Garmin GPS that I have been praising through this trip,let me down on Thursday about 3/4 the way through the trip from Organ Pipe.It all of a sudden lost its satellite connection.I could bring it back by moving it up to the dash from its place in the cup holder(which has always worked fine before) then when I moved it back it would work for a while then lose the connection again.I must see if there is a firm wear update that I have missed or if this thing is toast.I don't want to change mounting points as It has worked fine in the cup holder for over 2500 miles.Ron had his Street pilot on travelling behind me and had no problems with his.Time to visit the Garmin discussion forums and see whats up
I tried it again yesterday going into and around Yuma(in the cup holder) and it worked fine until I was driving back up the freeway on my return.I hate it when my toys don't work properly.
I guess I better stop complaining,I could be home right now complaining of the cold and wet flood conditions instead of the warm and dusty.
Posted by Wandering Willy at 2:35 AM