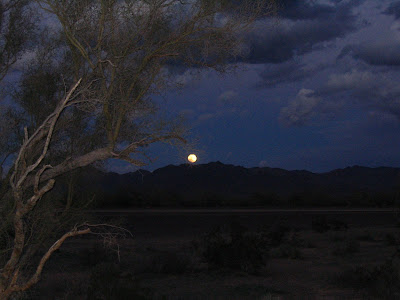 Yesterdays blasting wind finally died down in the wee hours of Saturday morning and the day was a pleasant sunny warm day in the 70's(20's for the celsius people)with a fair breeze that increased as the day went on, then died by nightfall.
These past few nights have been very bright with the full moon,in fact the brightest night of the year for all of 2009 was supposed to be last night.You can see for miles.In fact as the wind has been getting up again since (2A.M.Sunday) and starting another blast,I had to go out and close my front window guard as it was rattling. So I walked out in my jockeys to perform the deed. It was so bright I found myself looking around to see if anyone was watching.Like who would care anyway.
Yesterday was a do nothing kind of day as I got in my exercise hike around the LTVA,checking out the other rigs that are spaced out over the area.Spent some time still trying to figure why my GPS was acting up.Left it on in the van for 2 hours even with a windshield sun cover on,and it was fine.I have several other things to try as others on the Garmin "discussion Internet forums"have had similar problems.
A couple from Oliver B.C stopped by to inquire about my satellite Internet system,as they had seen it while out for a walk and are interested in getting one.We passed pleasantry's for a while comparing other destinations here in the desert southwest that we like to visit.
In the afternoon,Ron helped me try to figure what is wrong with my T.V. antenna,as I wanted to check the local reception and see if they were broadcasting in digital here yet.I couldn't get any digital as the t.v. kept trying but would read "No signal found".As to the analog,the picture was very snowy and I know the signal here is perfect.A direct hook-up from antenna head to TV with another cable did nothing to improve it,so must be the power head again,as was the problem 3 years ago.Thank goodness I have Starchoice and don't need it. 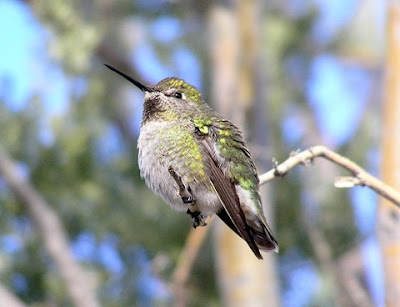 I wanted to add another bird shot from the past few weeks,of birds that have visited our camping area.This Black Chinned Hummingbird is probably the same one that flew into Ron and Sue's Motor home as the pic was taken at the same spot a couple of days before.
Ron and Sue get some great close up shots with their cameras.My camera is a total dork with a X3 zoom,so I rely on them for the bird shots.

Posted by Wandering Willy at 2:57 AM