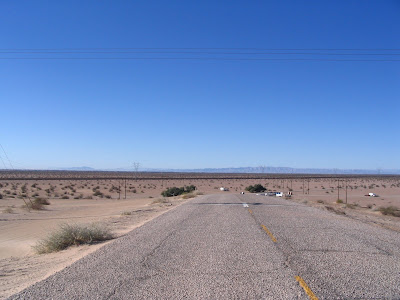 I must admit that I'm fascinated by the new border fence being constructed along the Mexico/U.S. border,but must make a correction from a few posts ago.I thought it was a concrete wall as it looked like it from a distance.But yesterday while driving out into the Imperial Dunes west of here,I got a closer look and it is a fence that you can see through and not a wall.When you look directly at it you can see through,but if you look from an angle it looks like a black solid wall.
This pic should zoom if you click on it for a closer look.

This area out here has several (Off Road Vehicle) campsites,like in the background of the pic above,and this being the start of a long weekend,(Martin Luther King Day), will fill up with campers bringing their Toy haulers full of Quads and Dunebuggys out to ride over the sand.I cant quite get my head around the fun in that...Too old I guess.But there will be thousands of them here as they come from all around,including Phoenix,San Diego and L.A. 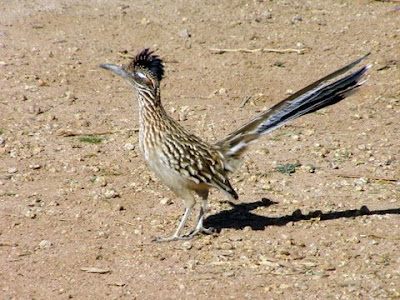 In our little feature on "Birds that come to visit us," is the Roadrunner.Now how come Wiley Coyote can't catch him,but Wiley can catch and destroy the Vancouver Canucks,like last night.
These little guys,(not all that little) have visited us at several of our campsites this winter.
They are meat eaters,so some will come close for a handout of raw hamburger,etc.
One year I had a chance to watch 2 of them mating.......Now that was something to behold!
Posted by Wandering Willy at 4:50 AM