And Now A Killer Bee Attack!…What’s Next For Old Willy?

All I wanted to do was sit outside my door with a cool one in the late afternoon yesterday.I had just settled into my recliner when I noticed what I thought was a large fly bumping my head.As I flailed away at it cursing its persistence,felt something else caught in my hair.As I pulled it out and threw it to the ground,I realized it was a bee.I stomped on it realizing that the other head bumper was a bee also.Within seconds I had at least a dozen swarming and butting my head and neck.I got 3 stings in a matter of seconds,one on the eyebrow,neck and thigh.They even attacked the dead one on the ground.

I didn't know whether to run inside taking some with me or not.I quickly realized that was my only option as I found out later it takes about 100 stings to kill and old guy like me. I wasn't going to wait around for that,although with only a handful of them,they each only get one shot.And there wasn’t enough of them……Yet.

As I ran into the trailer,and got the screen door closed,I had 3 inside with me,still attacking, and many more hitting the screen outside.So I went to work knocking down  the inside guys with my trusty ant spray which was handy,along with a flailing hand. 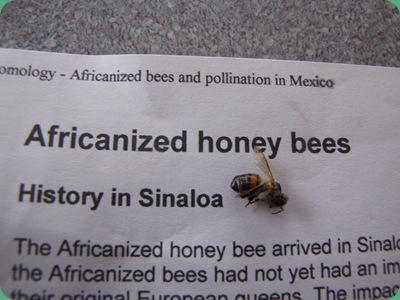 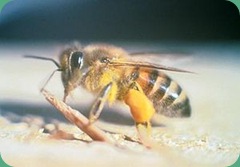 On the left is one that got me inside.

I stood at the screen door for the next 30 minutes watching and spraying through the screen as they continued to attack.Finally all were gone but one persistent one who didn't want to leave,then it started to rain and he finally left.It took awhile for me to get up the courage to go outside and retrieve my warm Corona from the table.

My neighbor,another BC’er parked behind me came over and told me this area has quite a few Africanized Bees and gave me a pamphlet about the local one’s.He’s a regular here every year and has seen this before.He also got attacked at the same time as me as several got into his camper through the fan vent,attracted by the cooking going on.They are attracted to odors and dark colors. 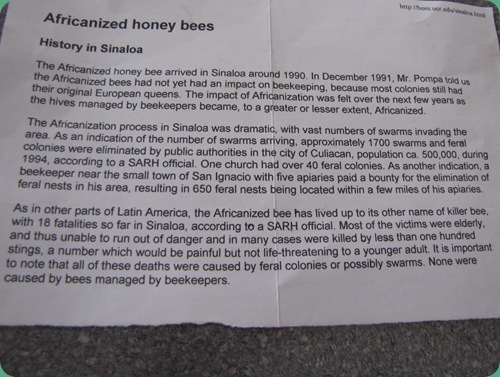 This is the info he gave me,above.One thing I learned doing my On-Line research this morning,was that if one or more bee’s start bumping you in the head area….Run for cover because the worst is yet to come.

This is my first experience with KB’s other than running into swarms of them with the truck on Arizona highways for many years now.Its a different story when you are outside at their mercy….And BOY! Are they fast.I think the animal kingdom is out to get me every since the Sugar Ant Massacre.

As a final note,this IS NOT an embellished story.It really happened and it scared the hell out of me as I thought….What happens if they never go away?

What will today bring?   Right now its almost 3AM and all I can hear are a bunch of screaming drunken kids on the beach.This has been going on for 3 nights now.They are staying in the rentals I showed on the first day here.This will be a noisy month on the beach’s of Mexico as the whole country heads here.

I’m due to renew for another week today……Hmmmm!  Maybe I’ll wait and see if they go home today. I still love Mexico but Mexicans love noise.Just a fact of life.

Posted by Wandering Willy at 2:12 AM