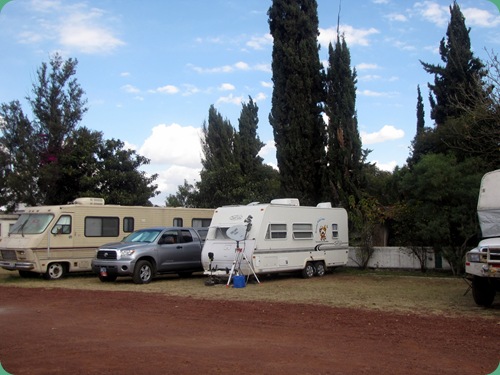 The motorhome is an empty rental.

Well! That was an interesting day and a half’s drive.I only managed to get myself in trouble once,and that was a bit of a doozy.

I left Hacienda Contreras Sunday around 8 am on a frosty, black ice morning,determined not to hit any topes(speed bumps) at normal speed this day,but that didn't last too long as I hit my first one within the first hour.This is where I really miss Marlene,she had an eagle eye and could spot them and warn me all the time.Its the ones that sit unpainted in the shade that get you.

It took just over 2 hours to travel the 60 miles to the Guadalajara/Mexico City Quota,(freeway),then it was off to the races to coin an old expression. 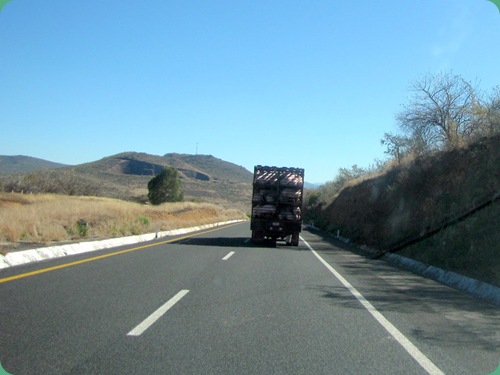 Just me and a triple decker load of pigs heading east.Then the traffic really started to pick up.I never thought that half of Mexico City would be using this day to return home after Xmas.

By mid afternoon the traffic was really heavy,and at the final toll booth before getting off at Atlacomulco,east of Morelia,the traffic was backed up to a 1 mile crawl, loaded with people either selling something or begging for money.

After passing through the toll booth the highway was blocked ahead with pylons directing everyone into Atlacomulco,just what I didn't want,but because of the construction of a new interchange for the also new ARCO-NORTE(Mexico City Bypass)I had no choice,jeeze! I even Google Earthed this spot so that I would know what to do,but all had changed since the satellite shot was taken.  As usual the signage was poor and again I was lost in a strange city,Sigh….

After ending up out of town in another direction and just about out of gas,I walked into someone's front yard and talked with a nice man and his wife who drew a map on my map, showing me where I was and how to get back to highway 55 going north,which was where I wanted to be in the first place.

Coming back to the autopista exit where all my problems began,I made another split decision that was wrong,taking an on ramp back onto the freeway heading back to the toll booth…Realizing my mistake,made a U turn,a no..no but by this time didn't care and I knew the police directing the heavy traffic back where I turned,would spot me coming out against a heavy flow, going the wrong way.They waved me into the median between the off and on ramps where they were standing.I quickly got out and with my map in hand told them in Spanish that I was very lost.They were great guys showing me my mistake and pointing out where to go.Then I asked them if they would stop traffic and allow me to make a U turn and they did,I guess just to get rid of me.Great guys.

20 minutes later I was gassed up and heading up the 2 lane road north looking for a place to stay for the night, when I came across a big Pemex station with a convenience store and restaurant. 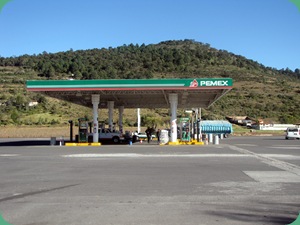 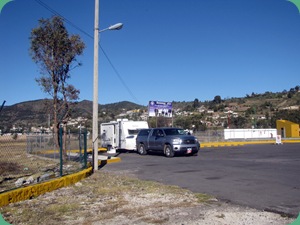 I tucked myself away in this back corner(pic above).Soon after nightfall, I had the company of a big rig one one side and a Mexican family in a beat-up old pickup on the other.This is at an altitude of 8000 ft and the temperature went down to 30 degrees overnight.It must have been cold for the family sleeping in the pickup box with just a cap.I had on my Buddy Heater(propane catalytic)which isn't supposed to even work at this altitude.It wasn't as effective as at lower altitudes,but did the job.

For those readers heading this way,its Pemex # 4421 just south of Acambay and north of Atlaculmoco on Highway 55,which links the Guadalajara/Mexico city quota with the Queretaro/Mexico city quota. 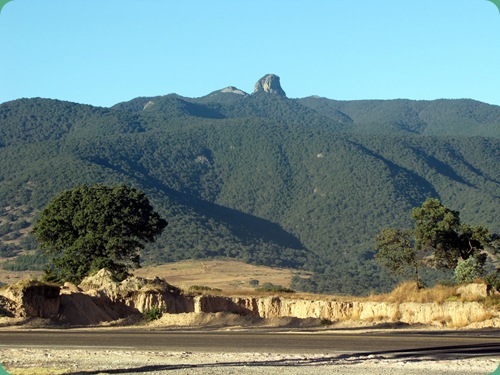 Next morning after scraping the windshield,I climbed from my 8000 ft level at Acambay up to 9400ft where I took this shot.That little bump up there must be 11000ft at least.From here I took the cutoff over to the Queretaro/Mexico city highway which is a beautiful 6 lane’s for awhile.Then I arrived at the start of…. BELOW…THE NEW ARCO_NORTE. 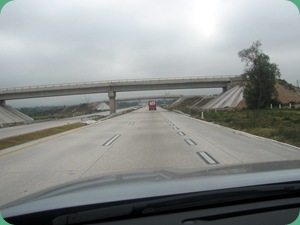 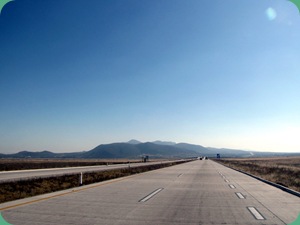 This is just a gorgeous new highway that bypasses Mexico City in a big arc over the north and down the east side, ending just west of Mexico’s 4th largest city Puebla,where I am now. 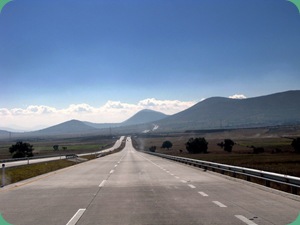 Most of this highway is like you see in the photos above,all at slightly changing altitudes between 7000 and 9000 ft with wide sweeping valleys and high mountains dotted with small towns.

The area really is heavily populated but they cut this highway through just enough unpopulated area that it closely misses many large cities,giving you the impression that its maybe some where in Nevada.

Finally at noon I arrived in the city of Cholula and quickly found the RV park,thanks to directions in Churches book.(The Traveler's Guide to Mexican Camping,4th Edition)

I will stay here for a few days as there is lots to see.Below is the back part of the park reserved for caravans,I guess.

There are only 2 of use here.The other a couple from California that I met at Villas Onac. Its only 2 blocks to a large shopping mall with a Sam’s Club on one side and a Bodega Aurrera(Mexico’s Wal-Mart) on the other end.Many stores, and a bank,and even a McDonalds.I walked over to get groceries.That way I don't buy so much. 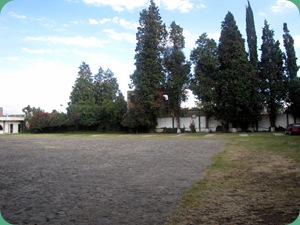 MY NEW LOCATION on Google

Posted by Wandering Willy at 3:43 AM