It’s been 2 weeks as of today since I arrived here.And in those 2 weeks I’ve had my share of excitement.But I think I’m getting all beached out and need a change of scene.The weather has been perfect and its a nice group of people here,so no complaints.

I’ve been pouring over the maps and guide books for days now trying to decide which way to go.At first I thought I’d go inland toward Guadalajara and Uruapan,then back out to the coast further down.But that long boring drive down the coast toward Acapulco and beyond on a 2 lane windy twisty road ,just doesn't appeal to me.

So now I will do the first part of my plan and go to the high country south and east of Guadalajara,then take the new (Mexico City Bypass) called the (Arco Norte) and carry on out through Puebla to the east coast and the Gulf Of Mexico,then south almost to the Guatemalan border,to the town of Palenque,which was my original destination,only I will be taking a quicker and shorter way to get there.When to start?That is the big question.Where I spend Xmas doesn't really matter as long as its not on the road.There are plenty of RV Parks on this first leg.Many of these places are around 7000ft,so it will definitely be different, weather wise.

Below is a map of this area.I thought it would be better to  show the layout of the Teacapan area and the big estuary this way,even though the Google Map in my sidebar is active and can be used. The little blue arrow centre left is the approximate location of this RV park. 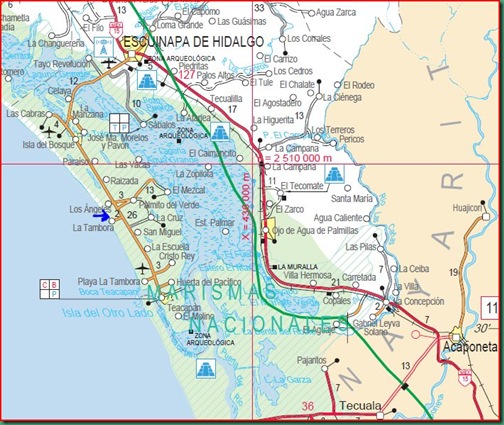 As you probably noticed,I changed the template color for easier reading and thought it was time for a new “Header Picture”that was a little more appropriate for this time and location.

So keeping with the theme of the last Header,striking the same pose,I needed some assistance,so i cornered a couple of nice ladies who were walking along the beach and asked them if they would like to take a photo of a “Bronzed Adonis”for me.They said sure…Where is he?

After clearing the confusion,one of them was very patient,trying to get just the right background wave for me to the point where my tiring arms were ready to fall off. 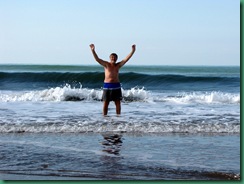 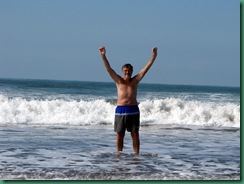 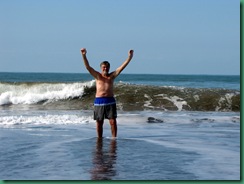 So I chose the one you see on the header,over these 3.

This is a lovely beach.Mexico has hundreds of miles of lonely beaches just like it.And the water is so warm.Even with the park here and all the campers,in the mid afternoon there might be 10-20 people spread out in a space like this at one time.This shot was taken mid morning..No one but me here.

I never get tired of watching the Brown Pelicans gliding along the crest of a wave looking for fish.They do this all day long.And when they spot one,they will fly high then dive bomb into the water to catch it.So unlike there White Pelican cousins who seem lazy by comparison.

Another nice sight is to see a school of Dolphins swimming inside of a wave just before it breaks. 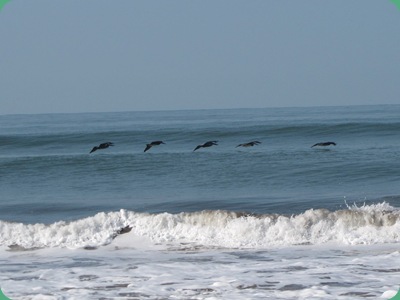 Another old rusty shrimp boat with its usual bird population. 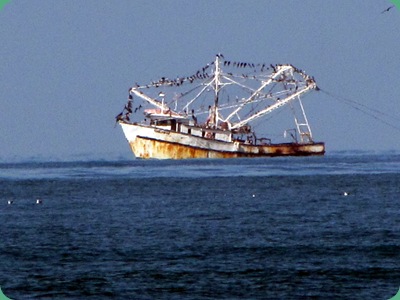 Cow-a-bunga Dude.Isn’t that what the surfers say.There’s been quite a large surf this past week.Even now as I write this,I can feel the shake from some of the big ones hitting the beach. 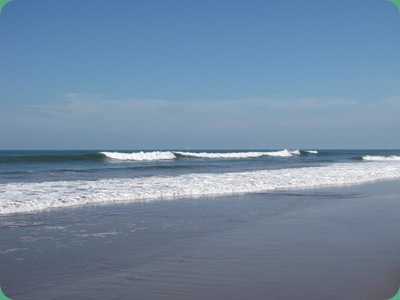 Finally with all the photos the other day of Storks standing around,I wanted to show one in flight.Cant you just visualize a diaper hanging off its beak,with a wee one in it. 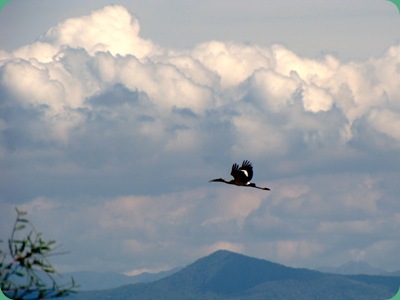 So in the next few days I’ll make a decision on when to pull up stakes and get this Dog & Pony Show on the road again.Decisions….Decisions….

Posted by Wandering Willy at 3:20 AM