I know that the Tundra has about 300 horses under the hood,but this is ridicules. 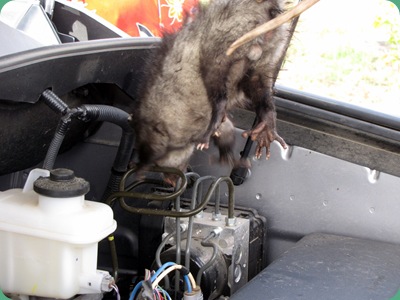 This little gal decided that my engine compartment was a good place to make a new home and possibly build a nest.She was in a neighboring vehicle that had been covered up for several days,and had built a nest between the radiator and fan,and when the people decided to go to town yesterday and uncovered the truck,the start up was a bit of a surprise as the nest and the Possum had stopped the clutch fan from turning.

After extracting her and the nest, they saw her ambling my way,so the lady warned me that they didn't see it pass beyond my truck and that I should maybe check under the hood.So I raised the hood and saw nothing.At least nothing jumped out,so I decided to check my oil anyway.

It was then that 2 of the fellows came over to have a look and found her immediately in the drivers side corner by the firewall.Shows how observant I was.I just assumed it would jump out when I opened the hood if it was in there. 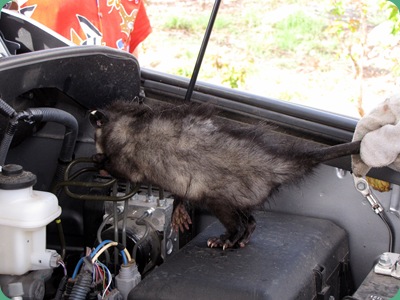 She’s not too happy being rousted out twice in an hour as she clings to the tubing. 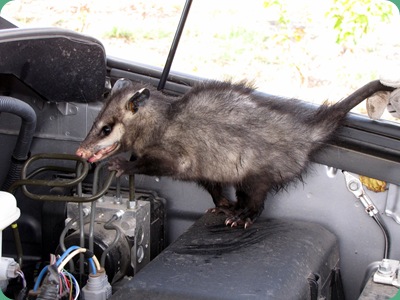 I think about now she’s saying,let go of my tail,I’m outta here. 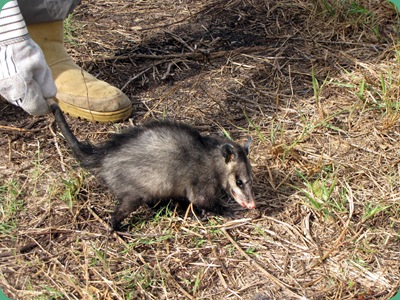 With all the nest building, she may be pregnant,so I hope she decides to go into the thicket as there’s lots of it around here.There’s no way of stopping her if she comes back in the night,so come daylight today,another hood raising will be in order.Or maybe she will go back to the other truck again.

Prior to all this excitement,I was out around the park trying to get a few bird pictures as there is a lot of activity just 5 minutes from the trailer.

Here are 2 for starters. 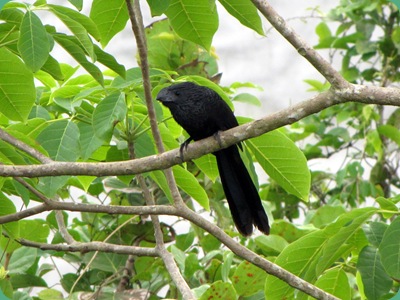 This is a Groove Billed Ani.A member of the Cuckoo family I believe.Looks like a Grackle except for the beak.They don't fly very well…And an Elegant Quail,distinguished by its tawny head plume. 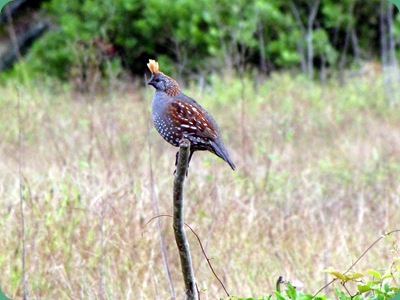 I watched an Oriole doing battle with itself against a truck mirror,but couldn't get close enough. Tomorrow’s another day.

Posted by Wandering Willy at 2:53 AM