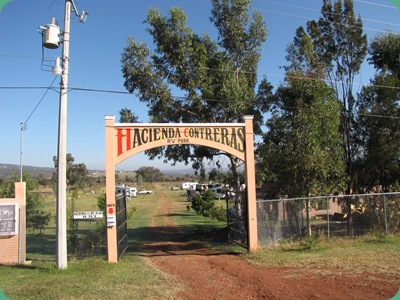 I haven’t been blogging for several days mainly because the laid back beach lifestyle puts you into a zone….Sort of a dead zone if you get my drift….called Vegetating.

So this an account of my daylong trip south and east,with all its trials and tribulations.

On Wednesday morning at 7:15,I departed Villas Onac in the fog and headed back through Esquinapa to the new Autopista (Quota as they call it)and headed south…It still amazes me how recklessly the locals drive here…They will pass you in heavy fog,not seeing anymore than a couple of car lengths in front of them.And if someone comes they will look after number one and just crowd you off the road.(Small rant and not the last). 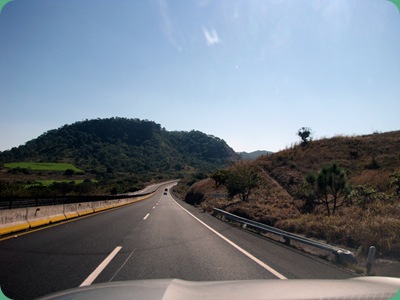 I was surprised just how fast this new Quota is compared to the old free road as I was in the city of Tepic in no time.The scenery started changing just south of Esquinapa as the fog lifted.It gets more tropical looking very quickly as the jungle look takes over,then you climb up to the city of Tepic at 3000ft and the scenery changes again to fields of Agave and Sugarcane,with sweeping farmland vistas.

A quick refueling stop at a busy Pemex at Tepic,was my only break.And again I was surprised at the fact that even busy,the attendant took the time to do the windshield, as In the past I’ve seen little of this.My attitude toward Pemex has changed so much since that rip off the first day,in fact at Esquinapa the other day, the little kid who was helping came running after me with my change of 10 pesos.I told him no,it was for him,then a big smile(sonrisa),came over his face. 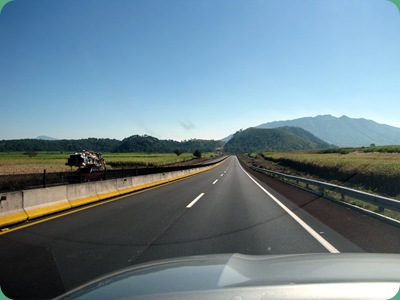 After awhile the farmland changed to mountains and beautiful forests of puffy pine trees as the road twisted up and down and around.The run this day has some of the nicest highway that I've seen in Mexico,with all new smooth blacktop. 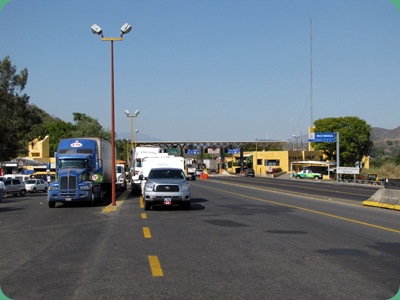 A quick lunch break at one of the Toll Booth rest areas, and then back out of that mountain range and back to familiar fields of Agave and Sugarcane,passing high on a hill above the town of Tequila where the namesake is made,in fact I noticed them harvesting the Agave root in one field and they wrap it up in white balls with black tape,it looked like a field of soccer balls.

Soon I was at my turn off point to take the back roads around Guadalajara,a city of over 4 million of which I wanted no part of driving through.And my troubles began as Miss Garmin selected the most obvious and direct route,but low and behold,it was a nightmare about to begin.Some 30 miles of narrow,very rough road,with several hundred (topes-speed bumps),and dozens of slow moving gravel trucks.And the whole thing undercut at the edge with a big drop off as they were in the process of widening this road.

But the topper is my stupidity in making the same mistakes over and over again.I have to trust Miss Garmin my GPS,she tried to turn me down an unlikely looking road and my instincts told me otherwise and I carried on and got into big trouble when I reached the town of Santa Cruz de las Flores,where I shouldn't have been.Miss Garmin tried to direct me again down what seemed to be an unlikely direction that would get me back on track and ignoring her again got swept up into narrow un-navigable streets,at least with a trailer in tow,then out of that onto a freeway heading straight into Guadalajara,a direction which was opposite to what I wanted.

It took 5 k’s to find a (retourno)which is a U-turn lane for 4 lane divided highways.The problem with those is the fact that there was no controlling light and a steady un-breaking stream of traffic coming out of the city,with no chance of getting quickly in with just a car,never mind pulling a trailer too.Its these situations and tiredness that causes one to take chances and hope that someone will hit their brake a little and let you in.This really isn’t a good idea in Mexico because most of the locals are really aggressive drivers,but I did it anyway and came out unscathed for this time anyway.Talk about white knuckle and high stress levels.

Finally as the afternoon is starting to get on toward darkness,I was finally back on track and on a familiar road that I've been on before,as I head around the south shore of Lake Chapala,Mexico's largest lake,53 miles long and 18 miles wide.I could see the towns of Ajijic and Chapala on the far shore reflecting in the late afternoon sun.These towns are full of expat Canadians and Americans.

Then more grief as I entered the town of San Nicolas.The towns main street is also the highway and in the middle of town its a very narrow 2 lanes,so what do the locals do….yup! They park on one of the lanes leaving the highway traffic to go into single lane alternating confusion mode,and with big buses and trucks,it had just about taken me to the brink.I kept my cool,(sort of)and finally got through and when I was turning off the highway,to go south,I didn't see a tope,and yes,everything inside the trailer was thrown around as I flew over it at a good clip.

At least the remainder of the trip was uneventful as I climbed out of the valley of lake Chapala into the high country where dry hills changed to more greenery and the temperature started dropping from the 70’s into the 60’s, arriving at this park with about 30 minutes of day light to spare. 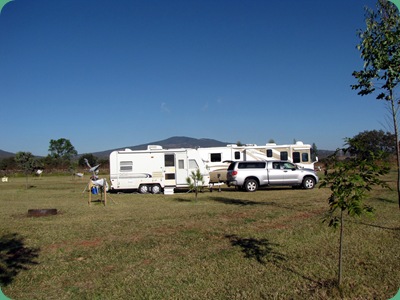 This is a pretty little park.I've now spent one full day here meeting the other 5 campers and the very friendly and accommodating owners,Barb and Sal Contreras and their family,down from the States for Xmas. 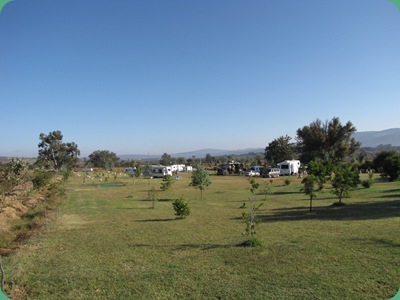 Another view.Plenty of room for more, and a great climate,no bugs that I've noticed anyway.We are at 6400 ft and yesterday was a sunny 70 degrees with a light breeze.Cool nights of course,but a nice change from the continual dampness of the coast.More on this place and surrounding area in the next blog entry.

Posted by Wandering Willy at 2:37 AM