Another Little Blast From The Past (Baja 03/04)

Just to start,I don’t know how this is going to turn out as I’m using my trusty old desktop to do this blog for the first time, and also its the first try with the new look template,so I’m still experimenting around.I’m not very computer literate so I have to be careful because I usually get myself in trouble.I wont know until I hit the publish button,if its going to be ok.

Many thanks to Al from the “Bayfield Bunch”for his quick action on my request for info on how to get a full page look.He contacted fellow blogger Laurie from “Semi-True Tales”and Laurie came through with an easy to follow step by step e-mail.Much appreciated,many thanks to both. 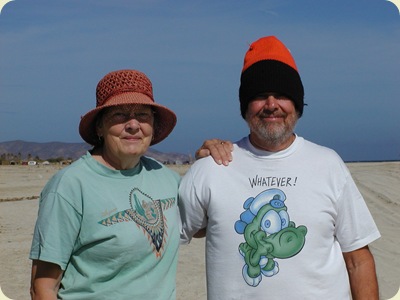 In the past 10 years that we have been snowbirding,we only missed one year and that was the winter of 02/03 when we discovered that Marlene had a brain tumor.We spent that winter living in our travel trailer in Surrey BC while she underwent radiation treatments.

She was cleared to travel the next winter, 03/04 so we were hot to trot and decided after doing mainland Mexico a few times,that the Baja would be a different experience….And it was.

The fall of 2003 was the year of much Hurricane damage in the southern part and this is an example of what we had to deal with. 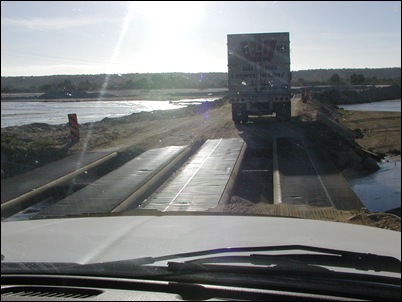 A little scary lining up when pulling a trailer with a different axel width than the van.

We spent most of our 2 months in Los Barrilies,an hour north of Cabo on the sea of Cortez side,at a campground called North Beach.I hear it has changed a lot since then and has become quite expensive.Back then it was inexpensive semi-boondocking right on the beach. 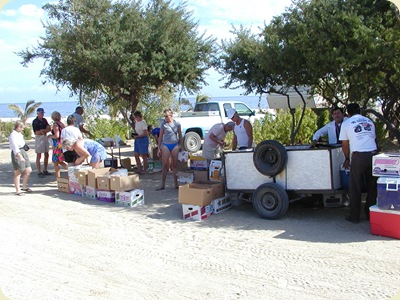 Above is a shot on “veggy man”day.Each day someone would come from town selling food of some sort.

That winter the place had a great group of people who all seemed to get along well.(something I see less and less of) since going back to mainland travels). 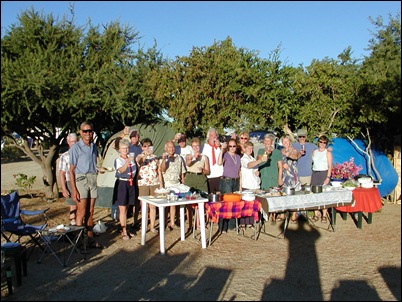 Here’s the gang at Xmas time.It was also I believe the first year that we had our New Years Day (tongue in cheek,”Polar Bear Swim”) 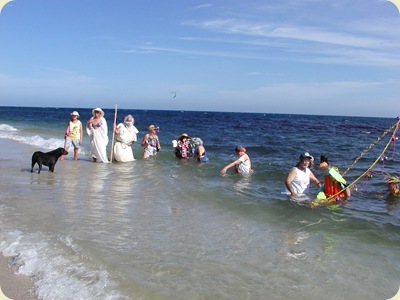 Hardly cold but lots of fun dressing up like idiots. 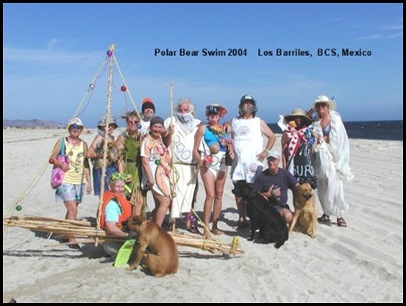 Not all of us got in this group shot,but this photo made the nightly news on BCTV in Vancouver that night when Wayne Cox showed it during his weathercast,and the tradition carried on for many years after until I believe, this year. 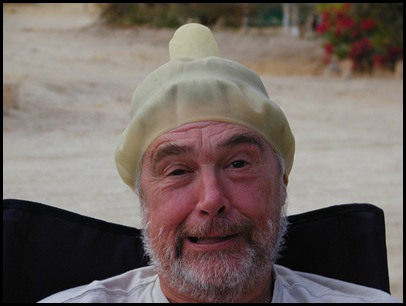 Hey! where else can you wear an giant condom on your head and make a stupid face,in public? 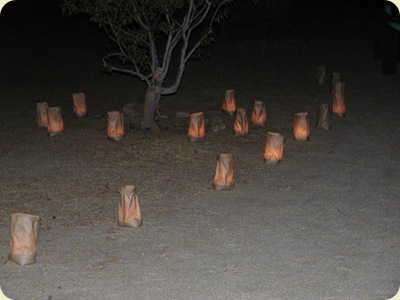 In the evening some of the ingenious people set out a border of lights(candle’s in paper bags),a nice effect. 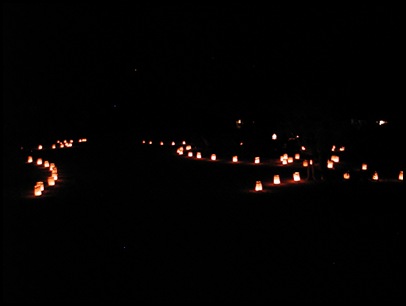 And finally a shot of our sunrise.(no sunsets into the ocean on this side) 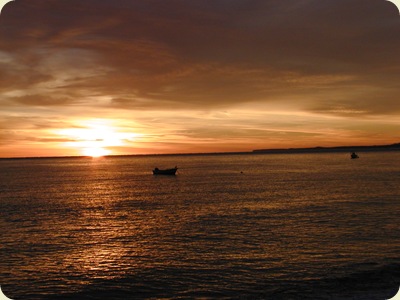 We've never been back since that trip as a 2000 mile round trip on that narrow highway has to be a once in a lifetime thing.I love the desert and must say that the desert landscape in parts of the Baja,far surpass any other desert scene’s that I've seen anywhere.

So, Happy Thanksgiving all you Canucks.

Posted by Wandering Willy at 6:40 AM