The Frustration of Refueling In Pre-Pay Land 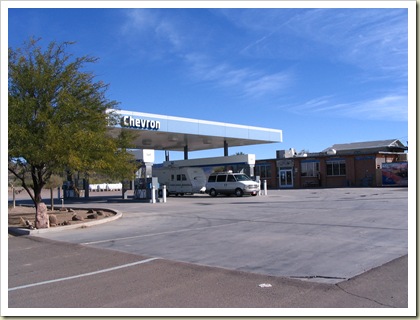 Can any of you Arizona boondockers identify this location?

When BC brought in the pre-pay law last year,it conjured up one of my pet peeves about refueling in the US every winter, when you come off the busy highway and into a convenience store gas station,and that sign at the pump says…Pre-pay before pumping.So you go in and stand in a long line-up of people buying slurpy’s and chips,just so you can hand the estimated amount of cash to the person behind the counter,and say, open pump number 3 please.

Then you cant get quite all that you estimated into your tank,so to get your change, you have to go back in and stand in another line up while someone buys a bunch of lottery tickets…..well,…you get the picture.

So yesterday I went on a quest to eliminate this problem before next weeks departure…I need a debit card that will work at the pumps in the US.Being Canadian,this is not easy.There was a time that my Canadian bank card did work down there,but no more,I found that out last year.

A credit card requires a zip code and some people manage to have luck adding a few zeros to their number among other little tricks,but generally,I’ve never had any luck at using them.There has been quite a bit of discussion about this on the RV.net forums,from frustrated Canuckleheads like me.Some say you can get a US dollar account at a Canadian bank and use the card from that,well…I tried that yesterday at the Scotiabank and they informed me that no you cant access the money in that account from the US,using the debit card.They are in affiliation with Bank of America and that doesn’t help.I know it can be done somehow as some Canadian banks are now affiliating themselves to the NYCE ATM network in the states,so a regular account debit card should work at the stations that carry their logo.And Scotiabank is one of them. 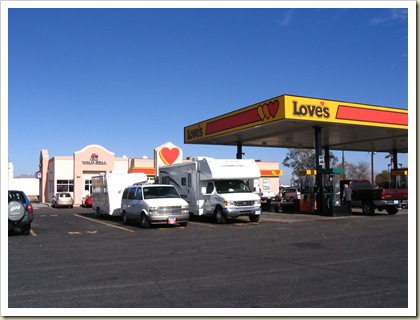 Can you identify this Arizona location on I-8

By this time I was frustrated as I had been to the 3 banks I deal with in Chilliwack earlier in the year with no luck in getting this solved.There is just not enough interaction between Canadian and US banks to make this a smooth operation.So I thought,hey! Its only 20 miles to Sumas Washington,so I went to my local bank and drew out $2000.in nice crisp,newly printed US bills,stuffed it all in an envelope with my passport and drove down to the border,parking on the Canadian side. I walked across to Sumas and the Bank Of America branch on the main drag,where a nice lady sat me down and we opened an account, and issued a debit/check card(No US address required)….Hooray!..I’m in business….No, not so fast…that's a temporary debit card and may or may not work at gas pumps,she says.I’ll have to wait until the proper card is sent in a week…Hmmm…I leave in a week,will it be here in time?Well that’s the next question to be answered.I will find out next Friday morning when I pass by with trailer in tow,and if not she will send it to any branch I want down south for pickup,and until then if the temporary doesn’t work at the pumps then its back to the line ups until I do get it. I can still use it at a bank ATM to draw the money out,at least.

So happily I go trundling back to the CDN Customs and show my passport and newly acquired bank folder with all the goodies in it.And a quick exit,not like last Feb,which is a whole nuther story.

So now when the CDN dollar rides high,I can deposit to my account from any US branch if travelling.

Just to end a long day that started with me getting my seasonal flu shot,I went home and tried to log into my on-line banking for BOA and that was fun.Its a little more involved when you do it for the first time as I had come home with so many passwords and ID number’s that the bank lady and I had set up,that I didn’t know which one to use and where,but after several trial and errors,now have my on-line banking so that I can follow all the transactions.

One final thing that I wasn’t too happy about was the fact that you must keep at least $750.in the account or your charged $15. a month.So that ties things up a bit.

Posted by Wandering Willy at 4:33 AM