A Blast From The Past (Part 3)Our Camping Rigs from the 80’s until now. 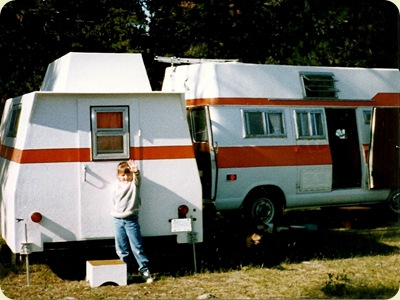 We moved to Chilliwack BC in 1974 when I retired from the military after 20 years,and took up a new line of work from fixing jet aircraft to fixing major appliances for another 25 years(a more stressful job I might add, but I loved it most of the time. 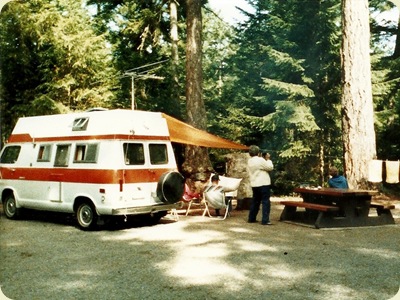 We continued to use the van and tent trailer until the early 80’s,when we decided everything needs a makeover.You can see by the photos above how we went with a new homemade paint job and a conversion of the old tent trailer into a hard sided sleeper.I enjoy working with wood so doing these projects along with drive to have a decent camping rig at a low cost,kept my interest up.

The photo above was taken on a thanksgiving weekend to Rathtrevor Provincial park on Vancouver Island.And the photo below in a beach side State Park in Washington.Fort Canby I believe. 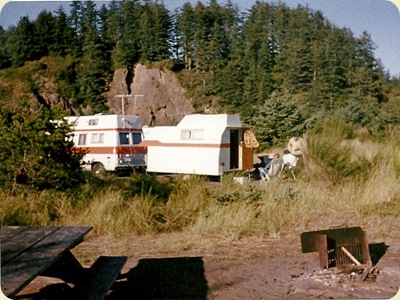 These units worked well right up until the early 90’s,when after having the van for 20 years,it was time for a change,so it was passed on to my daughter Kim and her husband.The trailer was left to rot. 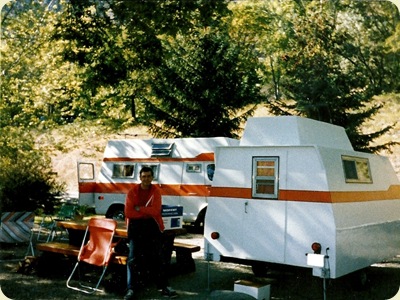 Below is the only interior shot I could find of the van, as we see Carly,Kim’s daughter and of course our granddaughter doing the dishes.She went along with us on many of the weekend trips. 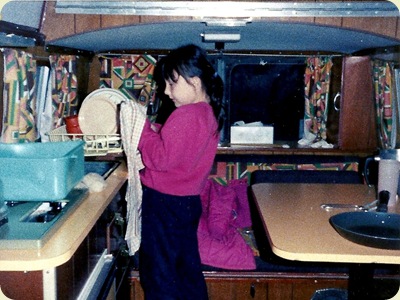 And since they are in the picture,here are our final 3 dogs from a 30 year string of 5 and we ended up having the last 3 at the same time as you can see.Left and centre the 2 sisters(German short hair cross I think)Shandy and Terra,one with short hair, one with long.They were inseparable.The little one that Carly is petting is “The Nipper”,I always added “the”in front of his name.I always got heck from the family because I called him the ugliest dog in the world,that he looked like he was made up from spare parts.He was sort of a favorite of the girls.

He was a result of a stray,(him) running in front of my van and getting a broken leg.I took him to the vet and got him fixed up, then gave him to the SPCA. Only after family pressure did I end up paying to get him back for the sake of family peace.They are all gone now,with Nipper being the last in the mid 90’s. 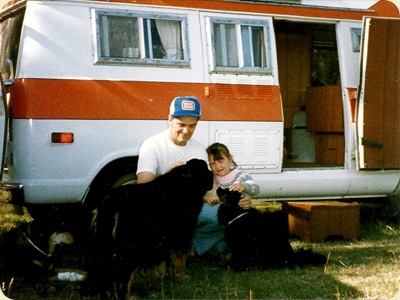 Now getting back to the theme of this little 3 part blog series.Our next move up was a purchase instead of a do it yourself project.I had just completed adding an addition to our house and building a double garage,with help from a never complaining, and always willing father,so I had my fill of construction for awhile,and so did he.Below is our next step…A 1984 Okanagan 17ft,being pulled by my work van,a 1989 GMC Safari.A little underpowered but got us around.We spent 5 years in the 1990’s with this combo and it was the combo that took us on our first snowbird trip south,starting New Years day 1998.Just to add that in 1997 we moved to our present location to get more into the RV lifestyle.(present location, see last Mondays blog) 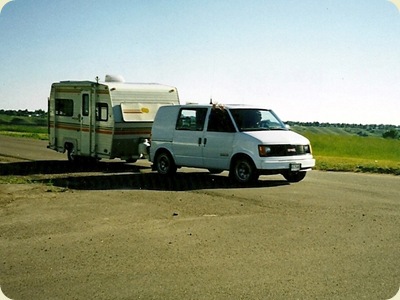 It was the only trip south that we took with this trailer,most of the 5 years were spent using it in local summer trips.

That trip south to California/Nevada/Arizona was a (go everywhere),(see everything) trip,crammed into 2 months.One of the most harrowing experiences on that trip was going through San Francisco during a massive power failure and all transit systems were down causing an overcrowded freeway system,and us stuck in the middle,not knowing where we were going and just being swept up with the rush in an underpowered tow vehicle.Then a few weeks after that we found both spring shackles broken and spent a night camping at the Napa outlet in Brawley Ca.(cant find the pic).The only reason I noticed the breaks was when I was laying low having a few pop’s in my recliner and was sitting by the wheel and noticed something hanging that shouldn’t have been.We were lucky we didn't lose everything on the road.

This next pic seems stretched,looks like the wife gained weight and the trailer morphed into a 26 footer. 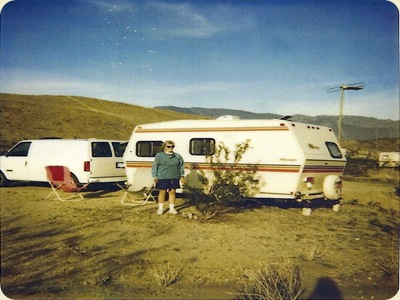 Here,(above) we are trying boondocking for the first time at Peg leg Smith’s (Borrego Springs Ca).We quickly found that we didn’t have the money for RV parks on a steady basis,so started the slow painful learning process on how to boondock.The need for a solar panel was the first priority. 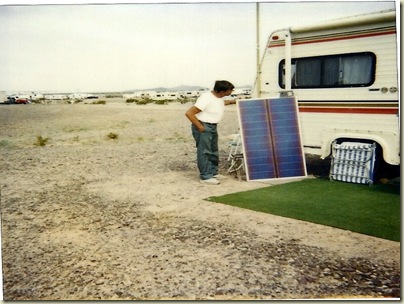 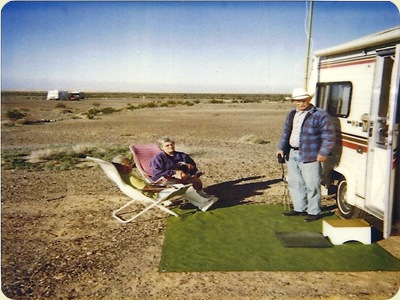 Here’s the man who was main source of advice in those days,friend Murray Jackson,a neighbor of mine here,shown visiting at Pilot knob.

So that’s it,in the summer of 98 we purchased our existing trailer 1999 21ft Trail-Lite. You readers have seen enough pics of this unit,so we wont add anymore here.I must say its been a very reliable unit,built when R-Vision was just starting out and had good quality control.Considering that its a super lite weight,and that we have been living in it for up to half of every year…..Its given very few problems.Its never been to a dealer,just maintained by yours truly.

AH! What the heck,just one more pic of the trail-lite,taken at Mister Moro’s,Playa Las Glorias,Mexico.Don’t you wish you were there? 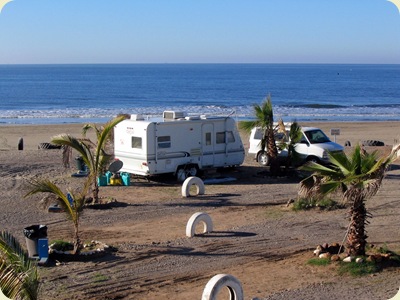 Posted by Wandering Willy at 3:04 AM