Prepping For My 8th Mexico trip

After staying in the desert southwest during my last snowbird season,I find myself yearning to visit Mexico again this up and coming season.Usually we spent just two… to… two and a half months on the Mexican leg of our trip south,which is less than many, as most of us buy our Mexican vehicle insurance for a 6 month period, as less time is usually more expensive.One good thing is that we are able to collect most of it back from ICBC,our Provincial insurance company, as our BC insurance is not effective in Mexico,so a refund claim upon our return is usually paid quite promptly,providing we can show proof that we actually visited Mexico.Below is an old shot of boondocking on the beach at Teacapan Sinaloa on one of our first trips. 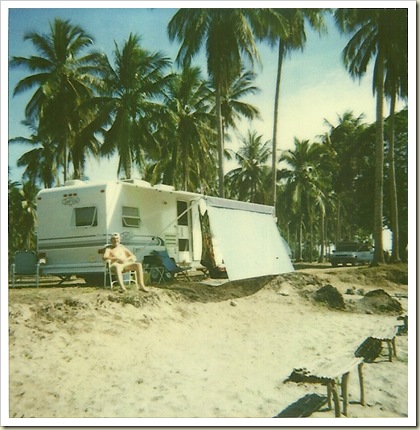 Don't park under a coconut tree if you value your life.

The prepping began late last August when I returned from the northern trip.The first order of the day was to get out the old Spanish language course and start boning up.Two years ago after trying several self help books,I blew myself to what I found was a great purchase on- line course.It cost a bit but was rated next to the Rosetta Stone courses,which are supposed to be the best,but at much less cost. 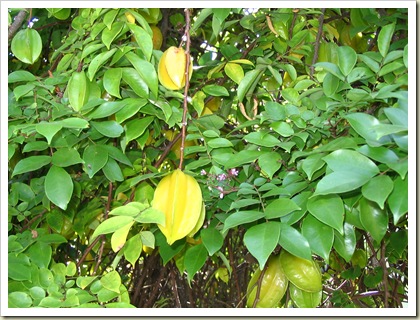 Star fruit growing in the campground at Miramar.

The course is from “Rocket Languages,”and I really like it because its interactive with plenty of audio to help with the pronunciation.Along with this, 2 years ago,I copied 52….25 minute episodes of a video story in (soap opera form),off the net from PBS the public TV network.This video was designed to teach Spanish plus having an interesting story line.It was called “Destino’s.(Destinations) 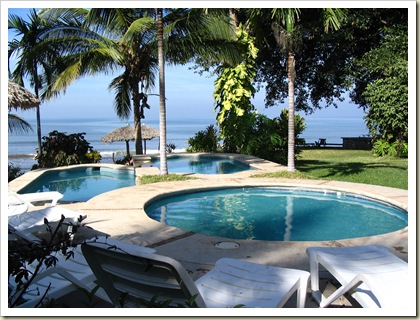 So now every morning,my first hour, to an hour and a half on my computer,is spent first with the course,then the video.After that I visit my blogger friends.

At my age I find learning a language difficult because its hard enough just remembering my friends names,let alone learning a language.I’ve been told my pronunciation is really good by Mexican friends,and I can always get my message across one way or the other.Its understanding what they are saying back to you at rapid speed…..That’s the difficult part,and the reason for immersing in the video’s and trying to pick up the gist of what is being said.I used the same method for French back in the 60’s,when we were living in Belgium,by watching the local TV. 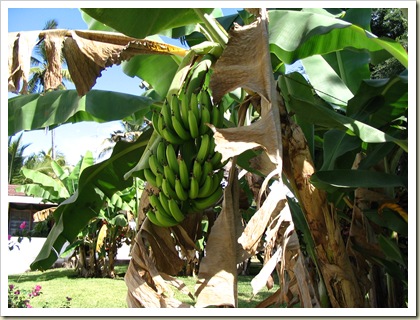 We enjoyed some of these bananas, growing in the campground.

Here’s another old shot from the early days with a couple of the local Mexican Policia,getting ready to haul me off.The head guy on the left was Gillermo,which is my name in Spanish also,so we were Tocayo’s which means “namesake.”So we would always call out tocayo to each other instead of our names. 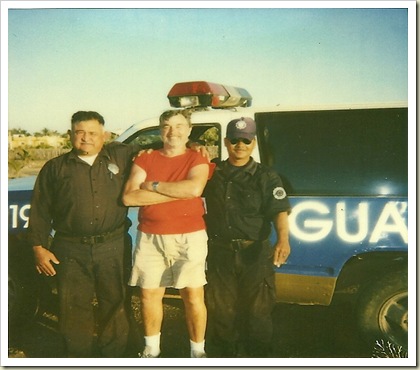 Some of the other prepping was the purchase of an SD card for my Garmin GPS,specifically for Mexico,as this year I would like to explore a little farther afield than previous years,so the roads wont be familiar.

It seems every year we would go to the same old spots along the west coast,so this year I would like to go all the way down into Chiapas, near the Guatemala border.I want to hear the Howler Monkeys in the night from my campsite or maybe see a Toucan in the wild.But specifically,I want to see some of the Mayan and Aztec ruins.

And “SHOT’S,”yes shots,this year finally,I’m getting my Hepatitis A and B shots.3 this month and 3 more boosters when I get back in the spring,all at $60. a pop.Thank goodness the Doc is not charging to administer them.I’ve been skating by on past years in Mexico without them,but don't want to push my luck as its a high contact area. 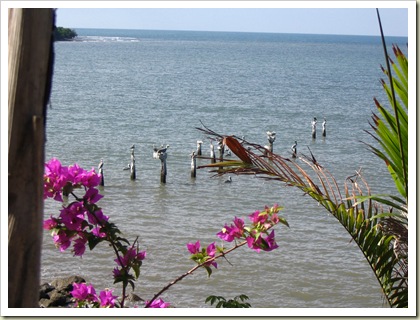 Pelicans on the posts.

At this point I want to thank all of you for your comments yesterday regarding my problem using the “comments” section.Also thank you Rick,for the little plug about my blog and my trip above the Arctic circle.

Now I would like to give some credit where credit is due….If you look in my section on “Blogs I follow,”you will see a blog called “Birding by Shantz.”This is a friend and neighbor of mine,Kathy, who lives just down the street.She and husband Ernie are also RV’ers who travel with a truck camper.They are one of the reasons that I made that northern trip this past summer.

They made the same trip 2 months before me, then did a blog series on there return.It was this blog series that inspired me to give the same trip a try.As it turned out I was travelling in northern BC at the same time as Kathy was doing the blog series,and I found myself just outside the area’s that she was covering.I found myself so taken by her descriptions and photos that I had to see these places for myself.She covers more of the nature side of things,like the bird, animal and plant life,with some great scenery photos.If you want to see her take on travelling above the Arctic Circle on the Dempster Highway,and other northern points,go to her blog and scroll back through the “Archives” to this past July’s posts and enjoy.LINK