Ah! The Wonders of Satellite Communication 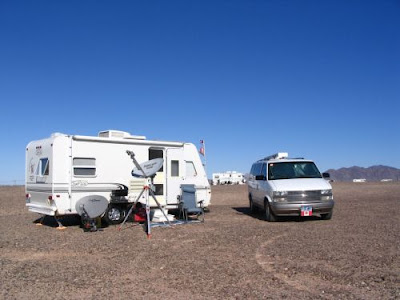 Yesterday, as most people know,was Superbowl Sunday and I like many others, like to watch the game,at least in part.(See 2 satellite dishes in pic above)they have something to do with this little story.
Such was the case late yesterday afternoon as Ron and I had been sitting out enjoying the afternoon sun,having the usual gab fest.It was time for me to go in and turn on the t.v and pop a cool one........but....Hold on thar!....My Star choice satellite t.v. is showing no authorization on all channels.This is what they do on occasion,usually at the end of a month,they send out a code change to the receivers,to stop pirating.Now this is OK if you are plugged into power all the time,but when boondocking,we turn the power to the receivers off at bedtime and usually in the middle of the night they send out the new code.

The first thing I did was check with Ron to see if it had happened to them and they were OK....strange,we are sharing the same dish.I have 2 receivers and both were out.
The last time this happened to me was 3 years ago on New Years day when we were at Organ Pipe and I had to stand at the only pay phone in the park....on hold....with a line up of people waiting......to get my turn with a Star Choice rep.15 minutes later I get the rep and request a hit on my receiver and by the time I got back to the trailer,the wife was watching a program.
But not this time...with the wonders of satellite technology and me travelling with 2 satellite dishes,I sent a signal out from one dish and within a minute another signal came to the other dish and travelled up the coax to both my receivers and voila!....we have t.v. again....Aint technology grand?

This is a little known service that Star Choice has that saves the long wait on the phone,and for me yesterday,the nearest phone was several miles away.Just the joy of having Internet where ever you are....I logged on to Star-C customer service with my account # and code....found Troubleshooting.......found the section at the bottom that says..."Restore missing channels or PPV problem".....Clicked the SUBMIT button,and in less than one minute a notice appeared saying you should now have your authorization back.
I looked up at my t.v and there was Bart Simpson.....Oh joy!....Do I want TV that bad?
So that is my little true tale of the wonders of satellite communication. 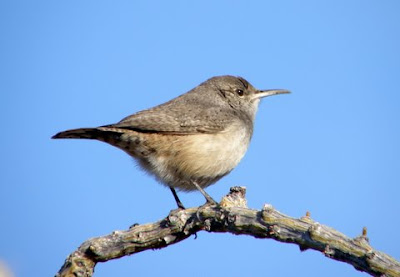 Some more of Sue's bird pics,taken in the past month.Thanks guys...One of these days I'll get a camera that can take nice close-ups. Above is the Rock Wren. 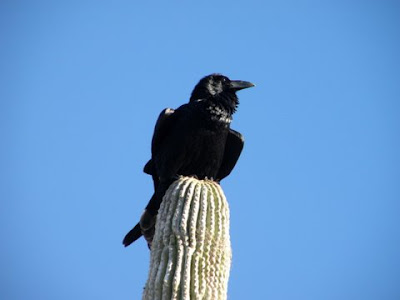 And this of course is a Raven perched on the top of a Saguaro cactus.

Thought for the day......"Those who live by the sword get shot by those who dont"
Posted by Wandering Willy at 3:27 AM