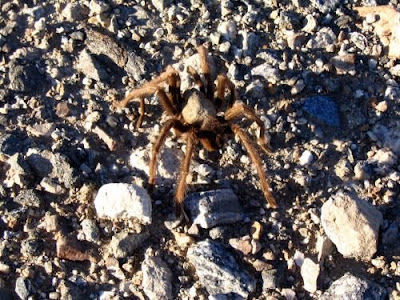 Yesterday was a hot day (topped 80)with very little breeze.I attempted as part of my morning exercise routine,to do my slow jog down into the Clark Lake Dry Bed just north of our camp.I made it 3/4 of the way and turned back as it was getting too warm and I didn't have any water with me.So the rest of the day was spent sitting in the shade of the vehicles.Up until now,we always sat in the warm sun,but not today.
We have for the first time a couple of other R.V.'ers,who decided to park fairly close to us.We call a couple of hundred yards close in these parts.Both from B.C. Nice quiet people.One left yesterday to stay in the $900.per month park with the golf course in Borrego.
Late yesterday afternoon,as I was trying to catch up on my back episodes of "24" that I have recorded on my DVR,and Ron came up to the trailer window,shouting that we have a visitor.(SEE PIC ABOVE)This Tarantula was "HELL BENT"going somewhere in a hurry,and nothing was stopping him.That pic is him going away from me as I jumped out of the way from my first pic of him coming toward me.
This guy is at least 4"-5" inches across.I've seen them this big in Mexico,but not up here.In fact I've never seen one here on the desert as its usually too cool and they are underground for the winter with the rattlers,which I've also not encountered here.
In fact the last rattler I saw, was last year in the campground in Celestino Mexico,and I almost stepped on him as he was crossing the road.Without a word of a lie,he was a "Diamond Back"with a body as thick as a soup can.And he like this Tarantula couldn't have cared less whether I was there or not.
Now to a lighter note 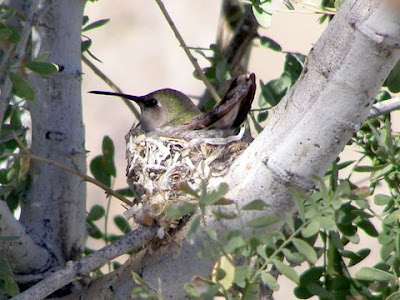 ,this is the Costa's Hummingbird that is nesting in the parking lot of the visitor center, that I mentioned yesterday. 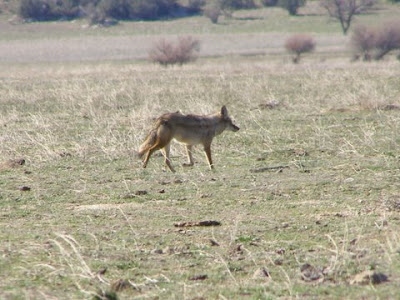 Wiley coyote looking for the little beep-beep guy.These shots courtesy of Ron's camera.
We have noticed that the coyotes down here seem a little healthier than the one's we see back home. 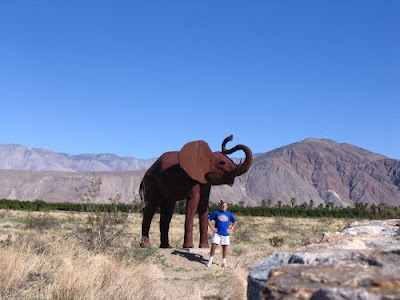 Another of the metal art north of town. 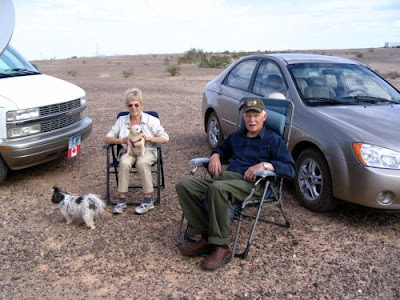 And finally on a bit of a sad note.Our friends,Murray and Denise are on their way home to the park I also live in.
Denise has become ill and was stabilized in the Yuma hospital until she could travel.
They should be arriving home late today.Get well soon,Denise.
This pic of them and their 2 dogs,Jessie and Chico,was just taken a week and a half ago at plot Knob(Yuma)when they came out to say goodbye to us when we were leaving for Borrego Springs.

Posted by Wandering Willy at 4:41 AM