Yesterday was a long hot 300 miles of Autopista (Toll Road) driving.Thank goodness for air conditioning as the temperature peeked at 86 degrees.

The start out of Hautabampito was a bit frustrating as I wanted to get an early 7am start, and the entry way to the park was blocked by the company vehicle parked sideways, I guess to keep out the Saturday night drunken kids that roar up and down the beach all night.And that they did……..All night.A little thing about ole Mex. that I had forgotten.

Blowing my horn in frustration didn’t do any good as no one seemed to be around on this fine sunny Sunday morning,so I knocked down a post and moved a garbage container and squeezed through a small opening against the hotel building with a little guidance from a lady camper friend parked nearby. 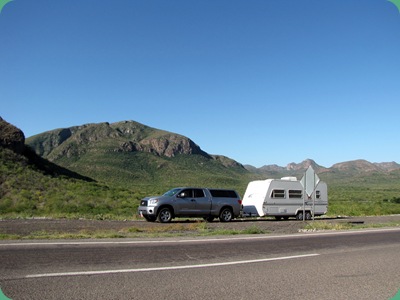 This is a pull off spot just north of Los Mochis,where you climb a small mountain range before dropping down into the Farmland that runs all the way to Culiacan.We have probably all eaten vegetables from this area. 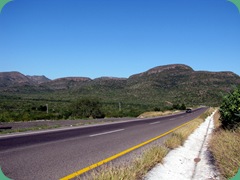 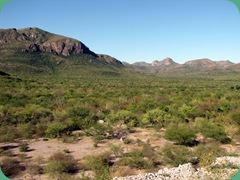 A couple more shots from the same area.The other half of the 4 lane Autopista,is behind me and above.

I had originally planned on only going to Mr.Moro’s Hotel and RV Park,near Los Mochis,the home of the cartoon figure on my trailer,but decided at the last minute to bypass it this time as its an hour each way off the main route. 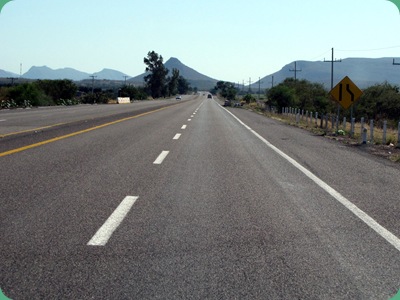 Just north of Culiacan.It was difficult to take (out the window) shots,because I was always looking into the sun with my southward direction. 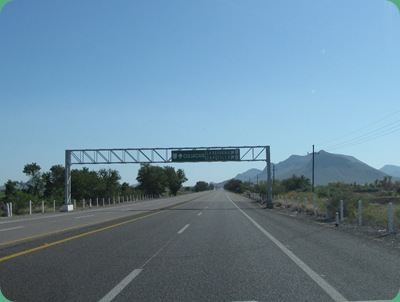 My 2 Pemex stops were like they always were, as I kept a close watch at the pumps.And for the first time that I can remember,the same attendant even cleaned my windshield on the last stop,for which he got a pretty good tip.More than I usually give. 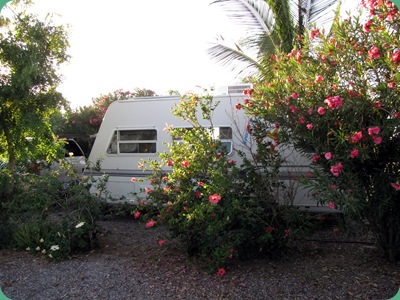 I arrived here at Celestino,just 48 miles north of Mazatlan,about mid afternoon.Its quiet here with just a handful of people so far,so I had a chance to select the site I wanted.

The cost is 150 pesos (or $12.14 cdn per day)full hookup with metered electric at 4 pesos a KWH.Chris the owner,an American from Alaska,has the lowest rates on Mexico’s west coast.The weekly is 900 pesos or($72.86 cdn) This is based on today's exchange rate.

The overnight is warm with all the windows open and sleeping on top of the covers is more comfortable.Soon a bit of a cool down will start in this area.At least the roar of the ocean is a little further away.Instead I get to hear trains all night.And roosters,and dogs,…sigh!… Its Mexico.

I will spend at least a week here.This is where I spent 2 and a half months,two years ago,starting at about this time,so its sort of old home week,just with different neighbors.

Posted by Wandering Willy at 2:42 AM