I Love It When A Plan Comes Together.

To carry on from yesterday,in our continuing saga of setting up a Satellite Internet System.My day was easy except it started at the crack of dawn when I went over for a shower and found no hot water,so a cold breezy predawn morning with no heat in the building,combined with a selection of cold and more cold for water,was I guess a good wake me up.When done,I walked to one of the sinks and found hot water.Hmmmm!I guess I picked the wrong stall.The story of my life.

Next,the laundry room part of the building was still quiet,so I gathered everything and got that started,then had breaky whilst the laundry was being done.Ah! So far the day is going fairly well,but thought the worst is yet to come when we start the commissioning process of the internet system.But I was wrong.

Barb made a phone call early in the morning to Galaxy in Toronto asking for a form to set up an account.(She has a Tracfone too)They responded in minutes with an e-mailed form which she printed out and filled out and faxed back.

While all this was going on,I slipped into town and got my final shopping done.By the time I got back in the late morning,she had all the info required to commission.Stupid me thought that we could do it on the computer just like when I did my satellite assignment change a couple of weeks ago.It kept giving us road blocks during the set up,so we did as Barb wanted in the first place,just phone them and let them guide her through.

It was an easy process as she got a nice fellow who patiently took her step by step through the process.We had to pass what's called “Cross Polarization,” by changing the skew on the dish while a read out keeps giving pass or fail until we finally got more passes than fails.Jake stepped in and gave it the magic touch and got continuous passes.Then we all held our breath as the modem recyled and we watched all 5 blue lights come up,on the modem.A great cheer went up, probably deafening the poor tech on the other end of the line,and we were done…….Then we cracked the Budweiser to celebrate. 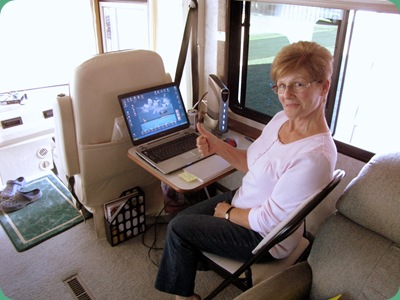 I don’t think Barb and Jake will have any problems they cant solve as they both take a big interest in the how’s and why’s of the system.I always figure the more you can learn about how it all works,the easier it is to troubleshoot a problem when it comes along,and believe me….many will come along.There is a great support community out there with discussion forums.I find reading about other people’s system problems gives a lot knowledge when the experts come up with answers.

And contrary to one negative commenter on my blog yesterday,so far my 2 years with a Hughes system has been an enjoyable one,and I’ve learned a lot during the process and gotten plenty of help from other users out there.And so far I’m finding Galaxy Broadband to be very helpful and patient.Case in point when I spent a 4 hour time span on the phone resolving a problem a few weeks ago,trying to get a satellite assignment change.The problem was with Hughes,and the tech at Galaxy, patiently had both myself and Hughes on the phone at the same time, resolving the problem.And we got it done.

SO TIME TO CELEBRATE THIS ROUND….Everybody’s happy. 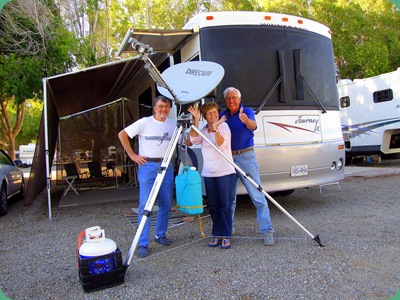 Re Gypsy's comment,as Al stated in his comment,its easy for one person.But I think,reading your blog and seeing where you travel,you are probably better off doing what Al and Kelly of the Bayfield Bunch,do,and just use a Verizon air card set up.Its probably a little cheaper and coverage is getting better all the time.Its just that I like to boondock the back country a long way from any cellular tower.Example, this summer above the Arctic Circle,and now down into Mexico.

So this morning,I’m off to Ajo/Why Arizona, were I’ll pick up my Mexican Insurance and maybe tomorrow morning or the next,make my 9th foray into Mexico.I’m loaded to the gunnels with (hard to find in Mexico,food items),that I’ve suffered through in past years.Now I got it down to a science,….I think. 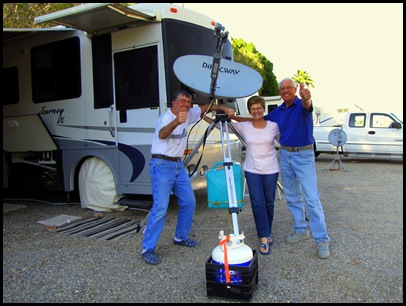 Posted by Wandering Willy at 4:23 AM