On my last blog post I talked about helping my friends with some familiarization on the satellite internet equipment,which they had driven over to Phoenix,to purchase, on Friday.(Actually Mesa,a suburb.)

Barb and Jake are their names,and they are from Nanaimo BC.Great people,full of enthusiasm toward learning and having this type of a set up.And the beauty of this purchase of used equipment was that it was actually 2 systems for 1/3 the cost of one new set-up. 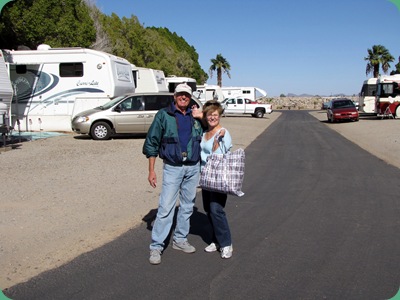 The reason for 2 systems being that they can use both, because they have a cottage on Denman Island also,and have a problem getting internet there.The previous equipment owner had somewhat the same reason with 2 locations and 2 set ups. 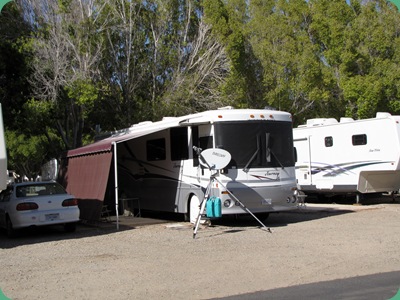 Here is their motorhome which Barb affectionately calls “The Road Whale.”And one of the dish set ups.

We spent all Saturday afternoon on the learning curve of setting up the dish and pointing,along with setting up the proper computer assist programs.Jake does all the outside stuff at the dish and Barb handles the computer end.Originally we did this out at my location 6 miles away from their park,at Pilot Knob.(No pictures were taken that day) as we had some problems getting a signal and as the sun went down,we were losing hope,but after hours of switching system parts,finally found out what was wrong.We found that the coax cables were faulty.Finally after using one of my sets of cable,everything was fine,but the daylight had ceased to exist.

So the plan was to get an early start Sunday morning (yesterday).But mother nature had other plans as about 3 AM,one of the deserts quite frequent high wind storms decided to appear.And when you are out here with no protection… 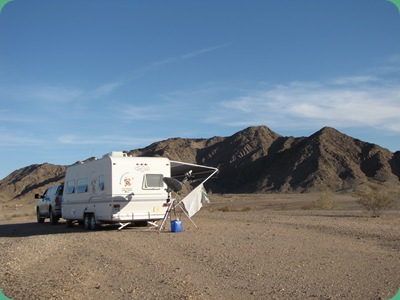 Well it isn't much fun.I've been through many of these over the years at this location,but this was a doozy.I actually felt the whole trailer twist as I held on for dear life.Thank goodness I use wheel locks between the wheels.I moved the truck to protect the dish a bit from the wind,but that left the front of the trailer more exposed and it got more violent.The dish didn't blow over,but kept going out of adjustment.

The forecast according to Barb,was for “sideways gravel” for the rest of the day,and she and I had a flurry of e-mails and phone calls going back and forth as she tried to talk me off of the Knob and come down to their park in Yuma where there was a little more protection from the wind,and beside’s, they were anxious to carry on with the training session.The offer to pay for a couple of nights for me,to move down there,was good enough to dislodge me from my hunkered down position.I said it wasn’t necessary but she insisted.

Hooking up in that windstorm was another unforgettable experience,as I normally use a backup mirror,but this was out of the question,so it meant getting in and out,…. and in and out,…and checking each time to see If I was lined up with the ball,and every time I tried to open the truck door to get out,the wind was so strong against the door that you needed to be Arnold S. to do it. 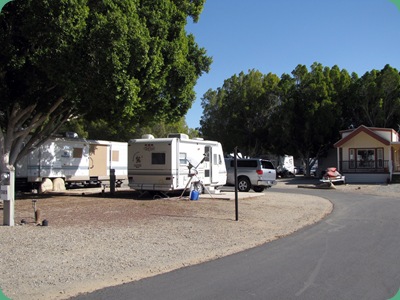 After driving to the wrong park,and having to get the trusty Tracfone back out and call for help,I was finally directed to the park that they were in.(They thought I knew).Its called Rivers Edge,and is the one you can see from the Interstate before arriving at Yuma from the west.Its actually on the California side of the river..And finding the entrance was another story.I’m parked right at the end of a row next to the river. 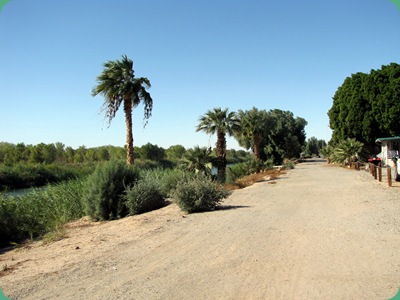 This is what its like across the road from me.

Jake helped me set up,and I got him to set up my satellite dish for me as a training session and he did a fine job,and also got to see how easy it is when the equipment is working.

We spent part of the afternoon driving out to the Foothills area to see Barb Nolley and husband Joe,who set me up 2 years ago,where Jake purchased all new coax plus a few other goodies.It was nice to see Barb and Joe again,as she has always been there for me when I had a problem with my system. So today will be filled with e-mails and phone calls back and forth to Toronto, to Galaxy Broadband as we try to set up an account for Barb and Jake.So I don't know what the day is going to bring.One thing I know….It wont be smooth sailing…but hopefully everything will finally click into place and they will be on- line with their new set-up and I can get back on the road to Ole Mex.On top of this I still have to do laundry and final shopping today.Busy busy,stay tuned.

Posted by Wandering Willy at 4:46 AM