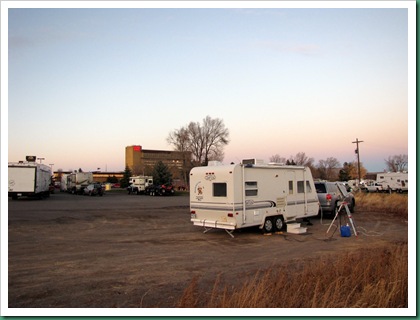 I’m tucked away in my little back corner here at Cactus Pete’s Casino,and as I write this in the wee small hours of Monday morning,its damn cold,only around the freezing mark but a far cry from the last 2 nights.My little “Buddy Heater” is pumping out the BTU’s.One of the best little power saving heaters around at a reasonable price. Yesterday was a stress free day of travel,I set my passenger side mirror high enough to still catch the road view and at the same time see the awning,and it never budged,so it must have been the unusual wind condition that opened it up.I did a search on the RV.net discussion forum and some of the people had some horror stories about their experiences with unfolding awnings under certain high wind conditions.And here I thought the Silver Bullet was losing power,but it was just that I had a Drag-Shute deployed. 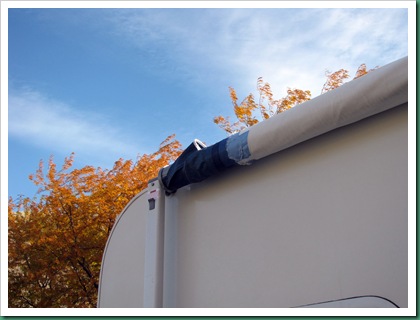 It doesn't look so bad rolled up,but unfurled,its a mess.

The drive over the Eastern Oregon mountains was pleasant, Interstate 84 is a smooth quiet highway,and a pleasure to drive compared to I-5 straight south,and the gas prices are better because you don't have to go through California and pay the big bucks.  My stop for gas in La Grange was the next chance to check my new debit card and because there is no self serve in Oregon,the fellow just stuck my card in the slot and with no pin number, it started the pumps.Hmmmm!Scary!I hope I don't lose it.I thought I had the safety of a pin number,but i guess not.They call it a credit setting,and come to think of it,the Camping World purchase was the same,so it acts just like a credit card. 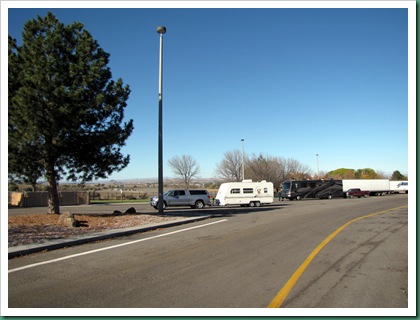 By mid morning,I dropped down out of the hills and crossed the Snake River,which divides Oregon with Idaho.Above is the rest area just across the State line.I started to pick up heavier traffic as I approached the cities of Caldwell,Nampa/Meridian,and Boise,with a combined population of half a million.

The day was sunny and cool,staying in the mid 50’s range.The whole drive east of Boise is really pretty country as you follow the Valley of the Snake,or in a more common term,the Snake River Valley. 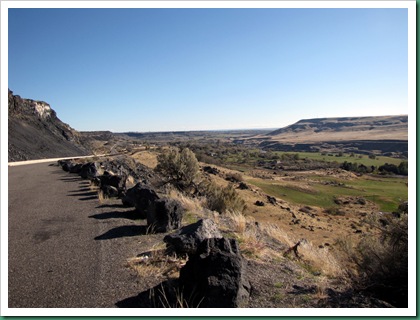 Here’s a shot looking east,near Twin Falls.This was taken just after another refueling stop.And to continue my tale of woe of trying to get the damn card to work with ease,I pulled another stupid.This time I insert the card and it beeps,but nothing appears in the window,so I try again,beep,and nothing,and now I'm building a line-up behind me,so I go in and stand in the junk food line up and when its finally my turn,she says my pump is ready to go already.So again it was a credit thing,still no use of a pin or zip number,just like the last time in Oregon.Some day I’ll get the hang of it.But I still don't like the idea of use with no pin number. 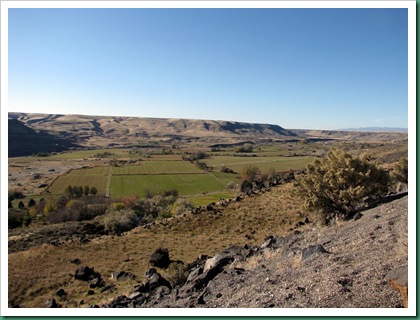 Here’s another shot of the valley of the Snake.Just after I took this shot,the road dropped down into the valley and the scenery changed to small lakes full of ducks and geese,with many waterfalls coming out of the surrounding escarpment,but really no place to stop and take a photo. I arrived an hour later at Jackpot Nevada,after a steady, hardly noticeable climb up on to the Nevada desert.

So today will be a quiet drive straight south through desolate country,with practically no traffic other then a few fellow snowbirds heading south.

I hope to reach Las Vegas tomorrow morning,so maybe since I go right by the Camping World In Henderson,I might see if they can replace the awning fabric.Even if it takes a few days to possibly order in or get an appointment,I know of some nice places to stay in the Lake Mead area.

I just checked the 5 day forecast for Vegas and its going to be in the 80’s,so I think I can put up with that.